How to Profit From The Cannabis Water War

Over the decades, the pot prohibitionists have thrown a lot of accusations against weed, nearly all of them absurd. The bill of particulars: pot causes insanity, fuels crime, encourages “miscegenation,” fosters “white slavery,” destroys families, leads to rape and murder, turns kids into vicious juvenile delinquents…the list goes on and on.

Sometimes when my friends and I want a good laugh, we re-watch the notorious anti-marijuana propaganda film Reefer Madness (1936). Now considered a camp classic, the movie shaped negative attitudes against pot that lasted for generations. (The plot concerns three teenagers who progress from reefer, to jazz music, to hysteria, to death.)

In 2021, the pot prohibitionists are a tad more sophisticated in their proselytizing against pot. A new narrative gaining traction is that marijuana cultivation consumes an inordinate amount of water. Supposedly, H20-hogging cannabis is ruining the ecosystem, harming agriculture, and putting the all-American farmer out of business.

Is this criticism true? In a word, no.

Admittedly, one aspect of the water critique is true: Societies around the world are increasingly bedeviled by a global water crisis. The crisis is spawned by climate change, worsening pollution, overpopulation, poor agricultural practices, and the woefully inadequate funding of environmental agencies.

The world’s stores of groundwater, which accumulate over millennia in aquifers, are vanishing at an alarming rate. The result is persistent demand for reliable sources of clean, potable water.

But don’t scapegoat marijuana. Let’s look at California as a case study.

Water and weed in the West…

The economy of California, with a gross state product of $3.2 trillion, is the largest sub-national economy in the world. The explosive growth of the legal marijuana industry in California has made weed a common target for farmers and politicians in drought-stricken regions.

Cannabis has become California’s most lucrative cash crop. The assumption is that cannabis is stealing water from the state’s other water-hungry agricultural products. Cannabis growers increasingly face opposition when seeking irrigation rights, pitting the marijuana industry against the agricultural status quo, especially the state’s thirsty and politically powerful vineyards.

However, according to a new report published March 8 by marijuana research firm New Frontier Data, the relative value of cannabis when compared to wine, grapes, corn, or rice underscores how the cannabis economy does not equate with other large-scale crops in agricultural-rich California (see chart). 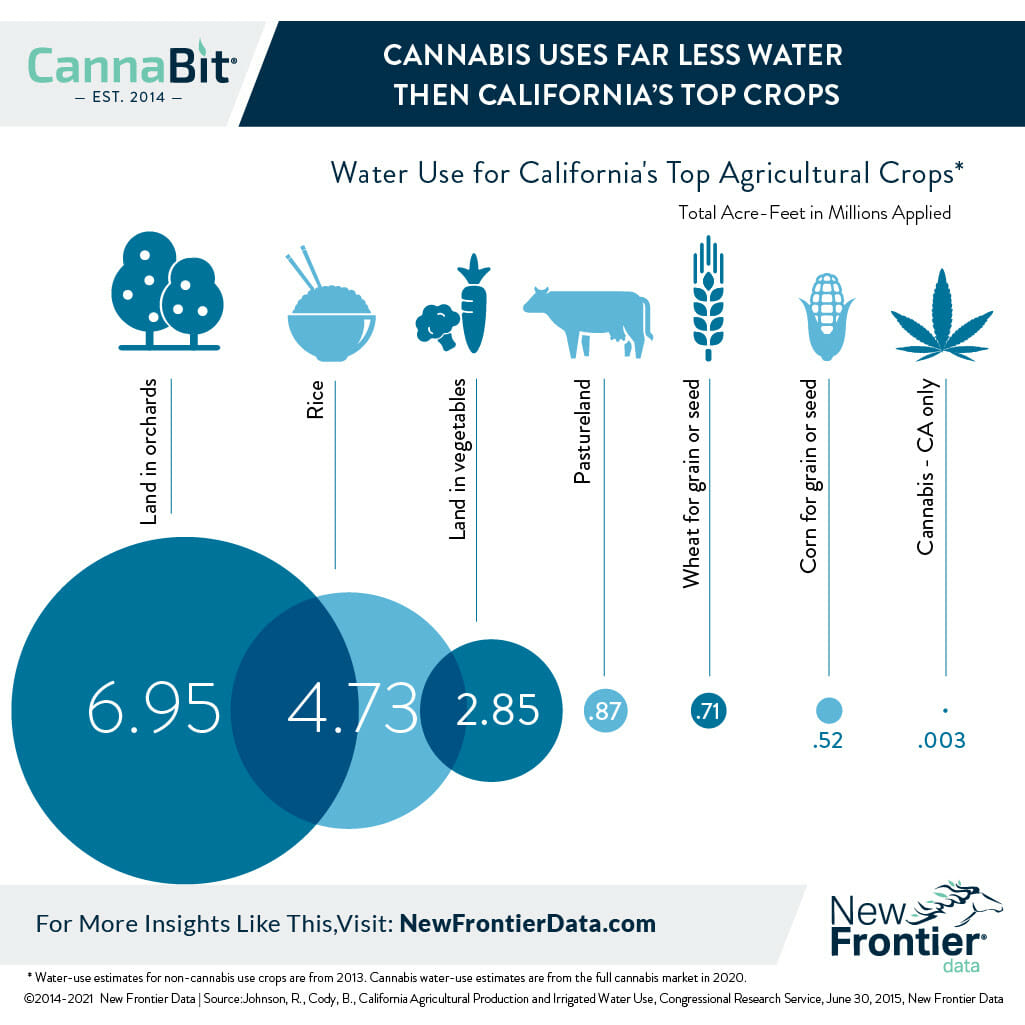 The market value of cannabis increases exponentially with only small increases in production. While the state produced over 7.1 million tons of grapes valued at $6.3 billion, and nearly 2.3 million tons of almonds valued at $5.5 billion, the state produced less than 10,000 tons of smokable cannabis flower (for the legal and illicit markets combined), but for a total value of nearly $25 billion.

The report states: “That comparative scale in yield to market value is a key reason why, despite longstanding conventional wisdom, cannabis comparatively uses so much less water per dollar gained than California’s other leading crops.” What’s more, marijuana is a major source of job growth in California and the rest of the nation.

The cannabis industry is in the forefront of developing water-efficient methods of cultivation, not just in bellwether California but around the country. That’s why I especially like the “pick-and-shovel” plays on the marijuana boom. They’re infrastructure stocks that can be wildly profitable.

Among marijuana infrastructure companies, some of the more promising firms deploy controlled environment agriculture systems that are designed to use as little land, water and energy as possible. They market themselves as “eco-friendly” as well as more cost-effective.

These companies have designed vertical farming solutions that use the latest pot growing techniques, including hydroponics. By investing in pick-and-shovel pot farming stocks, you can profit from the marijuana water wars.

California was the epicenter of the 19th century gold rush. Welcome to the 21st century green rush. The marijuana industry’s growth, from coast to coast, is explosive and making investors rich.

In fact, a group of ordinary individual investors are earning up to $55,362 a year from one company’s marijuana profit-sharing “program.”

As marijuana increasingly joins the consumer mainstream, the company’s fortunes are poised to soar. For details about this unique program, click here.