The Truth About Income Stocks

At that time, each of these stocks paid a forward annual dividend yield of greater than 8%. Normally, a yield that high suggests that Wall Street fears something is fundamentally wrong with a business:

Read This Story: Why The Payout Ratio Can Be Misleading

However, neither of those concerns applied to our trio of dividend payers. In fact, they have thrived this year due to the “reopening trade” that is pushing money into sectors of the economy that struggled last year.

So how are they doing thus far? Through March 9, the average return for these three securities this year is a little over 20%. That is more than five times the 3.6% gain in the SPDR S&P 500 ETF Trust (SPY) over the same span!

That comparison alone tells you everything you need to know about the stock market this year. The so-called “reopening trade” is really a “reversion to the mean” trade. Growth stocks are out and income stocks are in.

Closer Than You Think

If you are thinking that perhaps I just got lucky, think again. Admittedly, the performance of those three stocks is notably better than the 17.6% gain in the SPDR Portfolio S&P 500 High Dividend ETF (SPYD).

However, even if you simply bought SPYD at the start of this year you would still be more than four times better off than owning SPY. No matter how you slice it, there has been a profound bias towards income stocks this year.

Now, here is the really surprising aspect of the comparison between growth and value stocks. Over the past 12 months, SPY has returned 36.7% compared to 32.4% for SPYD. 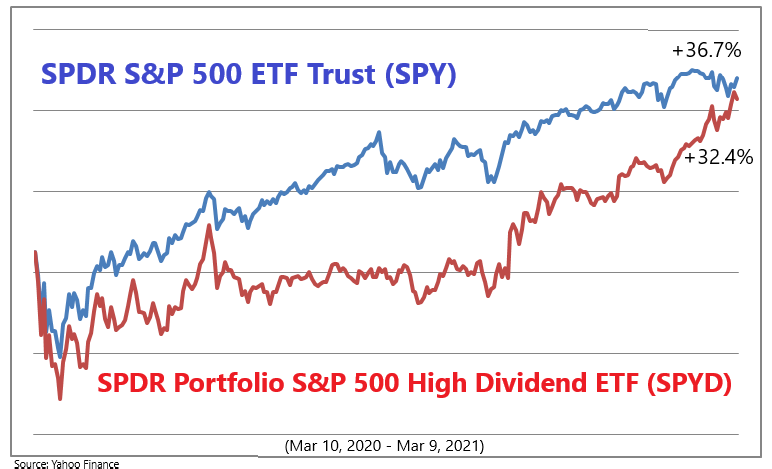 The portfolio allocation formula used by SPYD is simple. It buys the 80 stocks in the S&P 500 Index that pay the highest forward annual dividend yields.

At a recent share price of $39, SPYD pays a dividend yield of nearly 5%. That is more than three times the 1.5% yield paid by SPY.

Similar to the index, SPY is weighted according to the relative stock market value of each company in the index. Its top eight holdings account for 24% of its performance. Six of them pay no dividend at all, while the other two each yield less than 1%.

That means there is very little overlap between these two funds. One is almost a pure-play on high momentum growth while the other is a classic equity-income type of portfolio.

Since the onset of the pandemic, there has been a lot of talk about how the mega-cap tech stocks that dominate the index were getting all of the love from Wall Street. And to a degree, that is true.

But if the recent trend continues, high dividend payers may be sporting a better one-year track record than their growth counterparts by the end of this month. That would be a remarkable feat given how little attention has been paid to them by the mainstream financial media.

What little coverage dividend stocks have received during the past year has mostly been negative. So the conventional wisdom goes, why waste money on dividends when it can be used to repurchase shares?

The problem with repurchasing shares is that it does not result in an immediate monetary benefit to the shareholders. While the value of the shares they own may go up, they can only realize that gain by selling their stock.

Not so with dividends. That money is yours to keep no matter how the stock performs in the future. Over time, that money can really add up.

What can add up even faster is the income generated by Jim Fink’s Options For Income trading service.

My colleague Jim Fink has devised a proprietary options trading strategy that racks up profits regardless of the pandemic, stock market gyrations, or political turmoil.