If you think America is divided, just look at our cousins in Britain. A lot of troubled water is flowing under London Bridge, concerning Brexit.

The “Leave” camp argues that Britain’s decision to exit the European Union was a courageous act of national sovereignty that will spawn an economic renaissance in the UK. The “Remain” camp says Brexit was self-defeating folly motivated by xenophobia that will diminish Britain’s economy and global influence.

The Leave and Remain camps are still shouting at each other, but Brexit is a done deal. There won’t be a do-over referendum. And so far Brexit’s consequences are, as the Brits would say, bloody awful.

New data reveal that the economic damage from Brexit already is apparent and it’s substantial. Below, I’ll show you four areas of investment opportunity created by Britain’s epic split from the Continent.

The June 2016 referendum whereby Britons narrowly voted to leave the European Union shocked the world. After more than four years of bitter haggling between London and Brussels, the new relationship between the UK and EU took effect January 1, 2021. To date, Brexit is proving a headwind for Britain and the EU, and by extension the rest of the world.

UK trade figures for January, released March 12, showed a record drop in exports and imports to and from the EU (see chart). 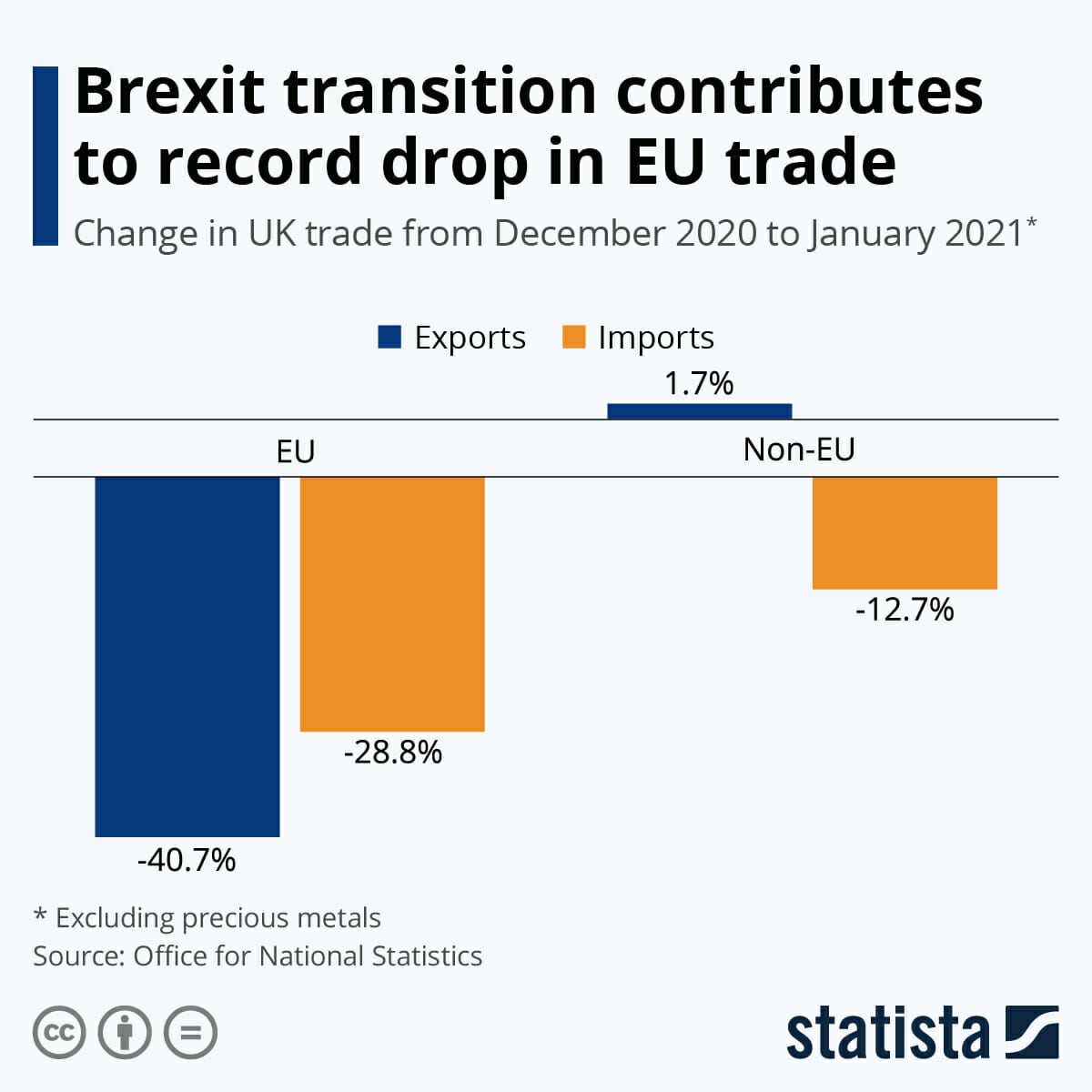 Analysts expect a persistent disruption to UK-EU trade flows, weighing on UK economic growth. Before Brexit, nearly 50% of UK exports went to the EU. The EU is collectively the world’s second-largest economy, in nominal terms, after the United States.

In addition to tariff relief, the EU allows free movement among its 27 member countries for employment and commerce. Effective January 1, the EU has treated the UK like any other outside country and applied Customs Union rules to border activity.

Britain’s highly profitable financial industry has seen the trading in stocks of European-based companies shift from London to the Continent, as cities such as Amsterdam and Paris become the primary trading hubs for such shares. An increasing volume of derivatives trading is fleeing London for New York.

All of this Brexit-induced damage is occurring while Britain still grapples with the coronavirus pandemic. But it’s an ill wind that blows nobody any good. You can leverage Britain’s self-imposed Brexit woes to your profitable advantage. Here are four areas where you can make a killing from Brexit.

Food, retail and hospitality. Bet on the decline in shares of UK-based grocers, retailers, and lodging providers. European tourism, already clobbered by COVID, is taking an additional hit from Brexit. The UK’s withdrawal on freedom of movement between the UK and EU nations will hurt travel and tourism-related firms with exposure to that sector. When pandemic-induced travel restrictions are finally removed, much of that lost business won’t come back to the UK.

Consumer staples and discretionary. You should also consider increasing exposure to major consumer companies based on the Continent that boast international diversification. These makers of well-known brands tend to perform well during periods of political and economic disruption. As global economic growth accelerates this year, consumer discretionary stocks should outperform as well. Companies entrenched on the Continent will pick up market share from their British counterparts.

Gold. The “yellow metal” is a time-proven safe haven that shines during bouts of geopolitical turmoil such as Brexit. Gold also offers tremendous growth opportunities this year. I prefer the stocks of gold miners, because they can wield corporate operating leverage for exponential gains.

Our investment team has found an obscure, small-cap gold miner that’s poised to blast off. The time to invest in this gold mining play is now, before the rest of the investment herd catches on and bids up its share price. Click here for details.