A Hall of Fame Play on NFTs

Like many Americans, I spend most Sundays in the fall watching my favorite National Football League (NFL) team. Despite my passion for the sport, I have not yet made a pilgrimage to the Pro Football Hall of Fame in Canton, Ohio.

In fact, it was not until this week that I knew the Pro Football Hall of Fame is a shareholder of Hall of Fame Resort & Entertainment Company (NSDQ: HOFV). Last summer, HOFV merged with a Special Purpose Acquisition Company (SPAC) to become a publicly-traded company.

I only noticed it when HOFV popped up on my screen as being one of the best-performing stocks this month. Since the beginning of March, its share price has tripled in value. 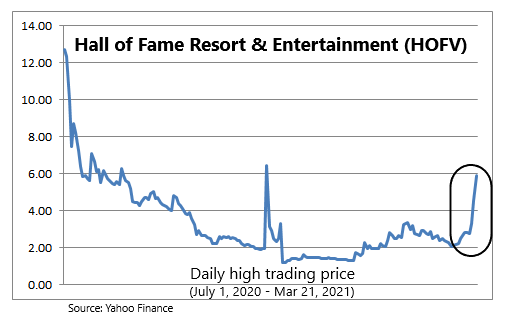 However, that performance is misleading. The stock plummeted after opening above $12 on July 1. On November 16 it bottomed out at $1.09. That works out to a 90% loss in less than five months!

At that time, HOFV was viewed as little more than a shameless money grab by NFL owners profiting off of the loyalty of its diehard fans. Actually, there is a lot more to the story than that. In addition to owning a hotel and resort in Canton, HOFV also owns a majority interest in an online fantasy football league.

In a press release, HOFV said that “it expects to leverage the Company’s brand and access to intellectual property to enter the high-growth vertical of the fantasy sports and gaming market in a unique way.”

Legalized sports gambling is a hot trend on Wall Street. You can bet that the NFL isn’t willing to let someone else make money off its valuable assets.

The nature of its business isn’t the only thing that is unusual about this company. The trading activity in HOFV has been a bit odd, too.

Understandably, that news failed to excite anyone on Wall Street. The company posted a net loss of $71.3 million in 2020 and only pulled in $7.1 million of total revenue. That type of financial performance is the business equivalent of a blocked punt in your own end zone.

Clearly, someone was buying a lot of the stock. But their identity and motive for owning HOFV remained a mystery until a few days ago. On March 23, the company announced that it will soon take advantage of the soaring interest in non-fungible tokens (NFTs). An NFT is a type of cryptocurrency that uses blockchain technology to represent a digital image.

Recently, an NFT video clip of LeBron James dunking a basketball fetched more than $200,000. Already, the National Basketball Association (NBA) has partnered with a tech company to create a digital library of video clips that can be licensed for use by NFTs.

Given this week’s announcement, the recent interest in HOFV makes sense. Most cryptocurrencies have skyrocketed in value. The price of Bitcoin (BTC) has increased 1,100% over the past 12 months.

When you buy Bitcoin (or any other cryptocurrency), what you are really buying is a fraction of the finite capacity of global blockchain inventory. The same holds true for owning an NFT.

Buying a share of HOVF could be an inexpensive way to speculate on a blockchain surrogate. Selling its intellectual property in the form of NFT images could become a huge moneymaker for the company.

But even if the NFTs turn out to be a dud, the company still has other revenue-generating assets. You may not end up getting Bitcoin-like returns, but you would still own a piece of a legitimate business.

However, trying to figure out what that business is worth is not easy. HOFV is difficult to evaluate since it has no direct competitor. It is designed to monetize fan interest in the league outside of its traditional television and stadium revenues.

I don’t think sales from the physical properties owned by HOFV will grow at a rapid rate. There are only so many people that can be crammed into those facilities. But I believe its fantasy football league will turn out to be highly profitable since that business is infinitely scalable.

Last year was an aberration due to the pandemic. Canton was a ghost town due to social distancing restrictions. But all that should change in 2021. By this fall, NFL stadiums should once again be filled with rabid fans willing to spend money on whatever the league wants them to buy.

Editor’s Note: My colleague Jim Pearce is the chief investment strategist of our flagship publication, Personal Finance. In the above article, Jim conveyed invaluable investing advice. Jim also believes that in the coming days, the #1 technology initial public offering of 2021 will start minting new millionaires.

It’s hard to imagine becoming a millionaire off one stock. But that’s exactly what happened to anyone who moved early enough on any one of the famous FAANG stocks. And it’s exactly what could happen to you, if you follow Jim Pearce’s simple trade. That’s why he’s calling his trade the “Tech IPO Retirement Stock.” Click here for details.