Inflation? It’s not your imagination. It’s getting rather hot and investors are starting to sweat.

The main culprits for higher inflation are supply shortages and distribution bottlenecks created by the economic disruption of the coronavirus pandemic.

I hasten to add, I don’t think we’re entering a long-term cycle of hyper-inflationary pressures. There’s still plenty of slack in the pandemic-damaged economy and jobs market to keep inflation from careening out of control. But prices are indeed rising faster than expected and inflation can seriously erode your gains.

If you haven’t already, you should implement protective measures in your portfolio against inflation…now.

The U.S. Labor Department reported Wednesday that the consumer price index (CPI) overall accelerated to 0.4% over one month, from 0.3% in August (versus the 0.3% consensus estimate), driving the year-over-year gain to 5.4%. Excluding food and energy, the gain was only 0.2% and 4.0%, respectively.

Energy, food and rent prices soared, but in a sign that inflation could eventually moderate, used car prices fell from their highly elevated level.

President Biden on Wednesday asserted that his administration is trying to rectify the supply chain woes and delivery delays that are pushing up prices.

The Bureau of Economic Analysis reported October 1 that the Fed’s preferred gauge of inflation, the personal consumption expenditures price index (PCE), soared in August at the fastest pace in 30 years.

The PCE climbed 4.3% in the year through August, exceeding the previous month’s reading of 4.2%. Again, supply chain snafus were largely to blame.

The majority of economists view rising inflation and the Federal Reserve’s intention to taper its extraordinary stimulus as positive signs that the economy is strengthening. There’s a school of thought (to which I belong) that the nation’s main task is to dig out of the economic hole created by the pandemic. Fiscal and monetary stimulus are vital medicine for the economy, which is finally starting to heal.

But inflation is unmistakably on the rise, stoking investor anxieties. September was a dismal month for stocks and the downdraft has continued into October.

Spiking energy prices are a major factor fueling inflation, but as I’ve pointed out in recent columns, the major reason for fossil fuel inflation is a supply-and-demand equation in the energy patch that’s out of whack (and on course for getting sorted out).

Regardless, the latest inflation numbers increase pressure on the Fed to become more hawkish. Indeed, minutes released Wednesday from the Fed’s last meeting showed that tapering is likely to begin sometime in November or December.

Whether it turns out to be very hot, or just moderate, rising inflation is a factor you need to consider.

The name is bond…

As inflation and interest rates rise in the coming months, you may be tempted to abandon bonds altogether. That would be a mistake. I explain why, as well as pinpoint a bond fund appropriate for this investment climate.

Knowing that rising interest rates wreak havoc with bonds, it’s logical that the single worst one-year period for bonds was 1980, when the federal funds rate whipsawed from 14% to 8.5% then back up to 20%. In that year, the aggregate return on bonds was -15.5%, as investors struggled to get a handle on the direction of interest rates.

But bonds don’t always react adversely to increases in the federal funds rate. Examining the trailing one-year returns of 10-year Treasury bonds, bonds tend to hold their own even when the interest rate edges higher. 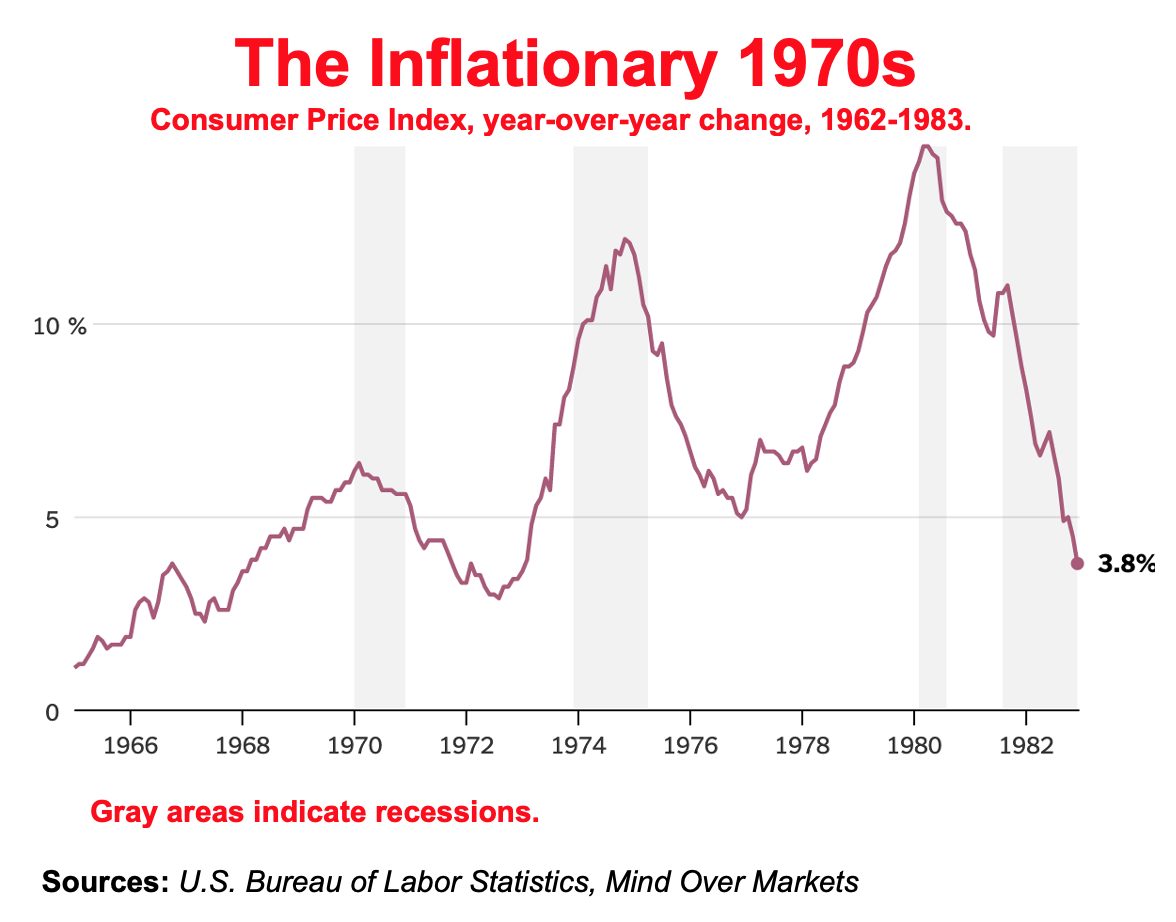 The stock market collapse of the early 1970s is instructive. By 1968, economic growth and the stock market had been rising, with only minor hiccups, for two decades. Prosperity would continue until the 1973-1974 bear market, when stocks across the board got crushed.

What triggered this bear market? The federal government was paying for Great Society social programs, while at the same time spending vast sums to fight the war in Vietnam. All without raising taxes. The Arab oil embargo of 1973-1974 and the Iranian revolution of 1979 also played roles, by curtailing supply and hiking energy costs. The Watergate scandal brought political risk.

Moreover, unlike the jobs equation today, globalization was less pronounced in the 1970s and labor unions still had strong (albeit waning) clout, all of which fueled wage growth. Inflation (as measured by the CPI) spiked from 3.4% in 1972 to 12.3% in 1974. A recession hit, spawning stagflation. It took Fed Chair Paul Volcker’s tough medicine in the form of sharp interest rate hikes to finally kill inflation in the early days of the Reagan era.

Read This Story: Bond Markets and The Danger of Crowds

Why did the bond market wipe-out occur in 1994? After economic growth and relatively tame inflation in the early days of the Clinton administration, commodity prices started rising and ignited inflation. In response, the Fed tightened interest rates by 25 basis points. The move came as a shock and the hikes kept coming.

In 1994, investors had grown accustomed to a low interest rate environment and ignored signs of economic overheating. The rate hikes came like a bolt out of the blue. While interest rate increases are generally harmful to the value of fixed-income securities, bonds take the worst hit when those increases are unexpected. This time around, the Fed has not shown an itchy trigger finger.

Your portfolio should hold bonds as ballast. They add diversification and a steady stream of income. That’s particularly true when you own well-diversified bond funds whereby managers can spread their bets and upgrade their holdings as the investment climate changes. Consider adding bond funds that offer interest rate and inflation hedges to your portfolio. Which brings me to the following bond fund.

The index is designed to measure the total return performance of inflation-linked bonds outside the U.S. with fixed-rate coupon payments that are linked to an inflation index.

With net assets of $409.9 million, WIP provides exposure to inflation-linked bonds of developed and emerging market countries outside of the U.S. As such, this exchange-traded fund (ETF) should hedge your portfolio against the erosion of purchasing power due to overseas inflation.

The fund holds a basket of about 100 foreign, investment-grade, inflation-protected bonds. These are repriced according to inflation levels in those countries, and all of the holdings are priced in currencies other than the dollar.

The fund currently yields 2.54%, but if global inflation rises or the dollar weakens, the yield will rise as the value of the payouts increases. The fund is one of the best dollar hedges you can find.

WIP’s top countries in terms of asset weightings include the economies of Germany, United Kingdom, Australia, Colombia, Chile, and Spain. That’s a buffer against risk in any single nation or region.

I expect strong returns, combined with inflation protection, from WIP in Q4 2021 and into 2022.

Every portfolio should hold protection against inflation in its hedges sleeve. With a reasonable expense ratio of only 0.50%, WIP does the trick.

Another effective inflation hedge is gold. At least 25% of your portfolio should be devoted to hedges. As part of your hedges sleeve, about 5% – 10% should be in precious metals, notably gold.

I prefer gold mining stocks to physical bullion or funds. To find out why, click here for our special report on gold. Our report pinpoints an exciting small-cap gold miner that’s on the verge of explosive gains.