Grandpa’s Got a Brand New Bag (of Weed)

When I was a long-haired teenager in the 1970s, the old folks would sternly warn us kids against the dangers of marijuana use. Many times, I found a reproachful finger wagging in my face.

Now, the grandmas and grandpas of this world are lighting up marijuana in droves. Maybe soon, we’ll hear Bob Marley music wafting through nursing homes. Regardless, the investment and health consequences of this demographic shift are significant.

The coronavirus pandemic has promoted greater marijuana use among most adult age groups, as people try to cope with stress, anxiety and various health ailments. The instinct during the pandemic to hoard consumer goods, including marijuana, also plays a role. And don’t underestimate the simple need to counteract boredom in quarantine.

But even before the outbreak of COVID-19, researchers were discovering the growing popularity of cannabis among senior citizens.

As laws legalizing marijuana proliferate throughout the U.S., the perception of marijuana as risky is diminishing, especially among the older adult population who came of age during the rebellious 1960s and 1970s. As they retire, many of these senior citizens will either continue, restart, or initiate marijuana use.

Marijuana is losing its stigma. In a continuing yearly survey from Gallup, a record-high 68% of U.S. adults said they were in favor of legalizing marijuana (see chart). 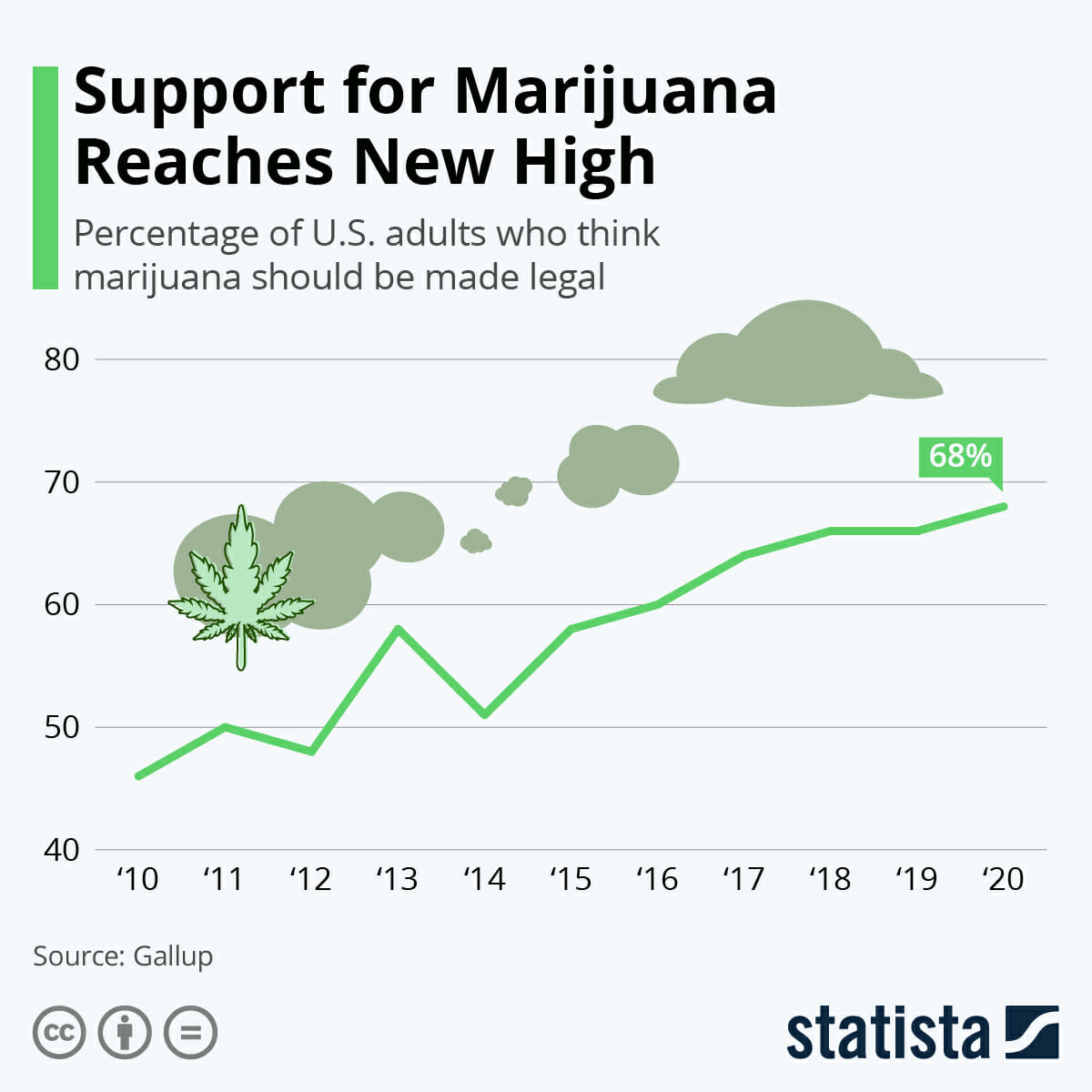 A recent analysis, compiled with data from the National Survey on Drug Use and Health, found that marijuana use in the previous year among people over 65 had jumped 75% from 2015 to 2018, from 2.4% of that age group to 4.2%. By 2019, use had reached 5%. The data showed women and people with higher education and income were especially taking to weed.

Rarely do drug surveys show this much change in such a short amount of time. What makes these changes even more startling is that they’re occurring among the elderly, a group that’s typically slow to adapt to cultural shifts.

The accelerating trend toward marijuana legalization is fueling greater use, of course. A growing number of states are lifting their restrictions against pot and bills are pending in Congress to remove the federal ban.

However, there’s also been an overt marketing push toward seniors. Marijuana dispensaries are offering discounts or free home delivery on “Silver Sundays” or “Senior Appreciation Days.” Marketers always are quick to sense and exploit a new trend, so it’s revealing that marijuana companies are targeting the silver set.

Health experts are expressing worry about the consequences of seniors flocking to pot. While most studies show that marijuana has clear medical benefits and is generally safe, we’re in uncharted territory. Seniors sometimes report dizziness or disorientation because of marijuana use; data on how marijuana might adversely affect the overall health of the elderly are incomplete.

But for now, the benefits greatly outweigh the potential downsides. Clinical studies show that marijuana helps relieve aches and pains from arthritis; vomiting and lack of appetite from chemotherapy; and the loneliness and depression that can afflict many seniors.

Looking to profit from the trends that I’ve just described? We’ve done the in-depth research for you. Click here for details.