In yet another setback for the travel industry, the U.S. Centers for Disease Control (CDC) reaffirmed last week that its “no sail” order issued five months ago will remain in effect until November 1. The cruise ship companies had been lobbying to move that date up to July 1.

That decision could cost Miami-based cruise operator Carnival Corp. (NYSE: CCL) more than $2 billion of additional losses this year. And that is on top of the more than $3 billion it expects to lose over the first six months of 2021.

As you might expect, Carnival’s share price took a hit on the news. On March 24, the day that decision was announced, CCL fell 1.9%. Since cresting above $30 two weeks ago, the stock has lost 15% of its value. 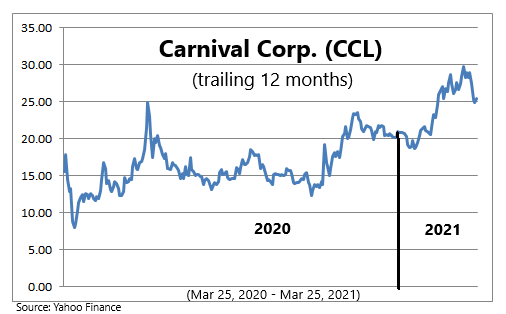 Despite that recent decline, Carnival was still up 17% this year. And since bottoming out below $8 last April, CCL has tripled in value.

Presumably, knowing the company will lose approximately $6 billion over the first 10 months of this year is preferable to the conjecture a year ago of how much money the company might lose.

I find that hard to believe. It is difficult to imagine a worse scenario for the cruise industry. By the time Carnival fully resumes operations, 18 months will have elapsed with no earned income to show for it.

I admit to being fascinated by the stock market’s reaction to the woes of the cruise industry. I first commented on Carnival four months ago when it swapped 57 million shares of its common stock for debt.

At the time, I thought that was a bad deal for Carnival’s debtors. They received stock valued at $18.05 per share. With CCL now trading near $25, thus far that exchange has turned out to be a bargain for them.

In early February, I once again opined on Carnival when it announced that it will offer sports betting on some of its cruises. I felt that was a sure sign of financial desperation.

Now, I am flummoxed as to why investors think that burning through $600 million a month will not be a problem for the company. That money is gone forever; it cannot be earned back.

Nevertheless, CCL has demonstrated remarkable resiliency this year. In part, that may be due to the “reopening trade” that has pushed many value stocks higher.

But the situation with Carnival is different. First, it will not reopen until the fourth quarter of this year at the earliest. Most other businesses in the travel & leisure industry are already opening back up. Last week, the daily TSA checkpoint count at airports was roughly half its pre-pandemic levels.

For that reason, I understand why airline stocks are on the rise. United Airlines (NSDQ: UAL), feared to be the major U.S. carrier most vulnerable to bankruptcy, is up 25% this year.

You can fly on a plane right now. But if you want to take a cruise, you’ll have to wait at least seven months before you can do that. Nevertheless, CCL is rebounding along with the rest of the travel industry.

I don’t like betting on a company to fail. When that happens, a lot of people lose their jobs. If it is a publicly traded company such as Carnival, a lot of investors get soaked.

In this case, I think the argument for betting against Carnival is so compelling that I bought put options on it that expire next month. A put option increases in value when the price of the underlying security goes down.

I will soon know if that trade pays off for me. Carnival is scheduled to release its Q1 results on April 2. At that time, the company may feel compelled to adjust its guidance for this year based on last week’s decision from the CDC.

The U.S. cruise industry would like to receive stimulus money from the federal government. I don’t think that is likely to happen. Most of the ships owned by Carnival are built in Europe and Asia. If the cruise industry went under, relatively few jobs in America would be lost as a result.

At this point, the fate of Carnival lies in the hands of its bondholders. As long as they are willing to continue lending money to the company then it can keep eating big losses. They may feel that they have no choice but to keep Carnival afloat until it resumes operations.

Right now, that date appears to be November 1. But if there is one more delay that pushes Carnival’s reopening into next year, this ship may run aground.

Editor’s Note: Our colleague Jim Pearce is the chief investment strategist of our flagship publication, Personal Finance. His above article just imparted useful investment advice. He has more to reveal. Jim believes that in the coming days, the #1 technology initial public offering of 2021 will start minting new millionaires. That’s why he’s calling his trade the “Tech IPO Retirement Stock.” Click here for details.