The Smart Way to Play The Crypto Craze

The key to making money is to read between the lines. Most people take headlines at face value. It’s my job to find the story behind the story. I try to adopt the contrary view. The biggest profits are made by betting against conventional wisdom.

With that in mind, I want to explore a “cool” tech trend that has become a hot investment topic: cryptocurrency. Digital currencies such as Bitcoin (BTC) are all the rage.

Problem is, when the blow-dried anchors on financial television (or, let’s say, your millennial son-in-law) start hyperventilating about an investment topic, it’s often a contrarian indicator that the bubble is about to burst. From 17th century Dutch tulip mania to the dot.com bust of 2000, the madness of crowds is a durable phenomenon.

Just remember one thing: investors who get their tips from cable TV or social media “memes” are sheep…and sheep get slaughtered.

However, I’ll show you a shrewd angle by which to profit from the ascent of cryptocurrency that the investment herd is largely ignoring.

Regardless of the waxing and waning of tech fads, one development has shown sustainable momentum: the post-election stock market rally.

Bitcoin slid by more than 5% on Thursday, pushing it below the $53,000 per coin threshold and well off its recent record highs. The mania for cryptocurrency appears to be fading lately, as retail investors lose interest, but if you invested early in Bitcoin you have my congratulations. Over the past 12 months, Bitcoin is up about 672% (see chart). 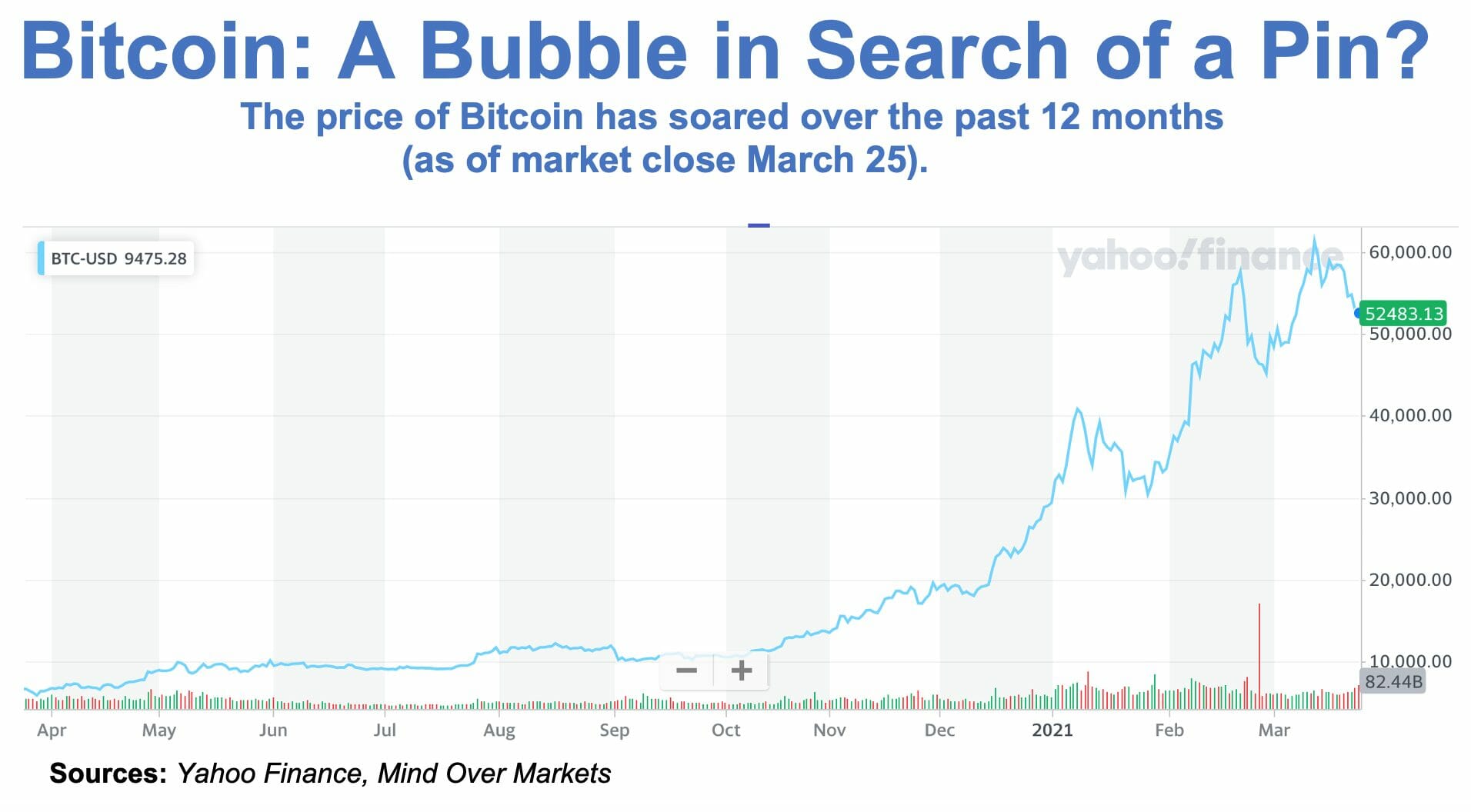 Question is, has Bitcoin reached unsustainable heights? Bitcoin has risen from $5,000 at the end of 2018 to highs above $40,000 in 2021. Bitcoin could still go higher for a while, but history tells us that an investment’s dizzying exponential rise is usually followed by a soul-crushing collapse.

Unless you live in a cave, you know that Bitcoin is a virtual, decentralized currency that circumvents government regulation. Bitcoin’s adherents aim to make it a universal electronic currency. Bitcoin is the pioneer and best known among thousands of cryptocurrency alternatives that include major competitors Ethereum (ETH) and Litecoin (LTC).

Bitcoin is both a digital currency and a payment system. It’s often compared to gold as a store of value that provides a crisis hedge. To get Bitcoins, you must first set up a digital “wallet.” A digital wallet is an app that stores many of the financial items you’d carry in a conventional physical wallet, but electronically. You then pay a willing seller the necessary hard currency to transfer the coins into that wallet.

Bitcoin was invented in 2008 by one or more computer programmers using the pseudonym Satoshi Nakamoto, identity still unknown. A growing number and variety of U.S. merchants are starting to accept Bitcoins as payment, which dovetails with the overall trend toward cashless mobile payment systems.

In a Securities and Exchange Commission annual report filing February 8, electric vehicle maker Tesla (NSDQ: TSLA) announced that it had bought $1.5 billion worth of Bitcoin. Company founder and CEO Elon Musk also said that his company would start accepting Bitcoin as a payment method for its products, to achieve “more flexibility to further diversify and maximize returns on our cash.”

Tesla is the first automaker to accept cryptocurrency. The news sent Bitcoin’s value soaring, although it has since pulled back. Billionaire entrepreneur Musk once again proved his ability to move markets.

Adherents of cryptocurrency praise its anonymity, transaction speed, versatility, and security. Critics of Bitcoin say it lacks intrinsic value; Bitcoin has value only because people agree that it has value. What’s more, governments could decide to ban cryptocurrencies, to protect their own traditional fiat currencies.

If you’re risk averse and Bitcoin and its “altcoin” counterparts seem too volatile and dangerous for you, consider investing in the crypto craze via blockchains. They represent a picks-and-shovels play on the trend.

There is a finite amount of Bitcoin, of which roughly 90% already has been “mined” (i.e., issued). You don’t need a doctorate in economics to understand a key factor behind Bitcoin’s rise: increasing demand combined with shrinking supply drives up the price.

But my main point is, blockchains have a multitude of real-world commercial uses and as such, they represent a dynamic growth area within the technology sector. The lightning-fast computing power of blockchains makes them useful for many tasks unrelated to crypto, notably those performed within the Internet of Things.

Blockchains have the potential to add to the growth of many established tech companies, especially chipmakers and systems integrators. According to research group Statista, worldwide spending on blockchain solutions is expected to grow from $1.5 billion in 2018 to an estimated $14.4 billion by 2023. Blockchains are proving their tangible worth as productivity-enhancing tools within the corporate enterprise. That’s where to put your investment money, not in the crypto tokens (or related index funds) themselves.

Tech breakthroughs such as blockchains are continuing to drive the economic recovery. The U.S. Labor Department reported Thursday that the number of new applications for unemployment benefits dipped below 700,000 in late March for the first time since the coronavirus outbreak.

Initial jobless claims filed traditionally through the states fell by 97,000 to 684,000 for the week ended March 20, exceeding estimates that new claims would fall to a seasonally adjusted 735,000. 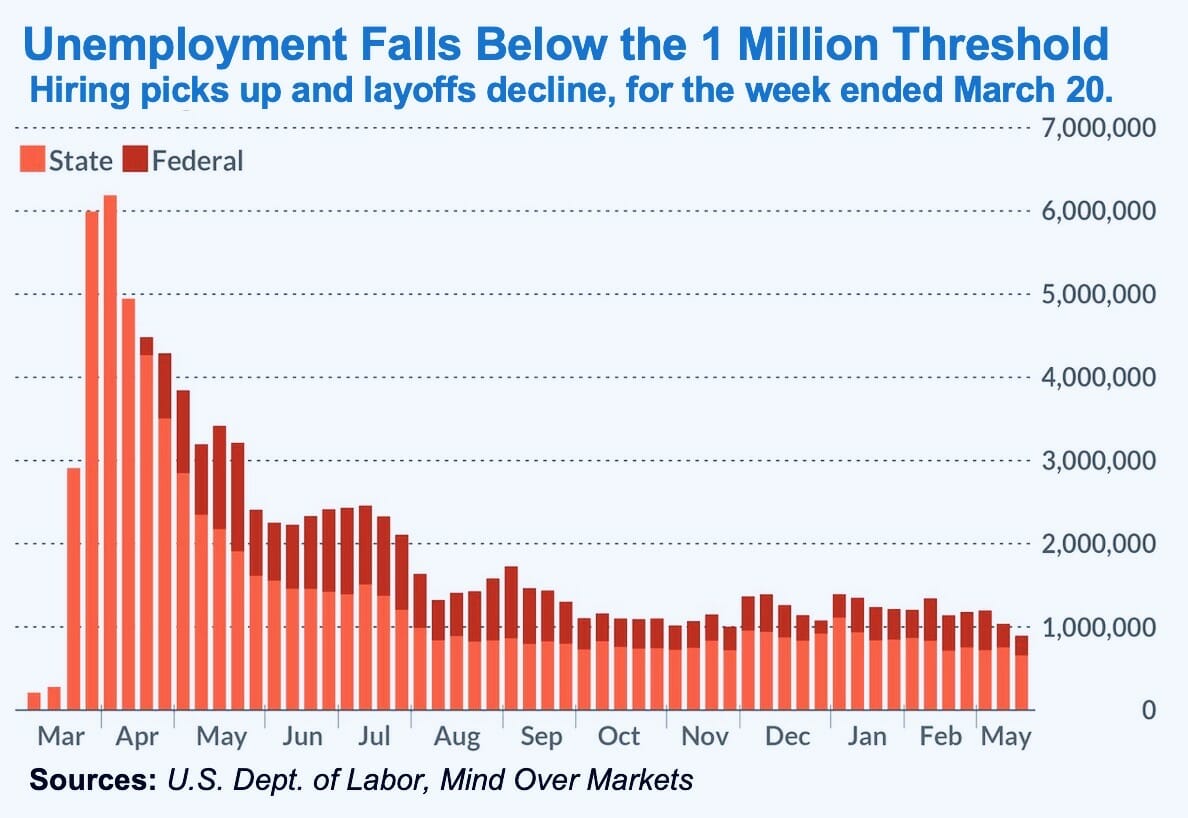 There’s also good news on the pandemic front. President Biden on Thursday announced a new goal for coronavirus vaccinations, saying his administration aims to have 200 million shots in arms by his 100th day in office.

Large-cap tech firms have been economic “winners” during the pandemic and they’re positioned to thrive even further in the post-COVID world, as consumers become accustomed to the digital and mobile capabilities of the work-at-home culture.

That’s why our investment team has put together a special report: “5 Red Hot Stocks to Own in 2021.” In this report, we provide the names and ticker symbols of the highest-quality stocks to buy this year. Click here for your copy.

PS: Are there any topics (e.g., cryptocurrency) that you’d like us to cover more often or in greater depth? Drop me a line and let me know: mailbag@investingdaily.com.