The Best Sector Bet This Year

The recent tech swoon might seduce you into thinking now is a good time to load up on names that seemed prohibitively expensive just a few months ago. For example, Tesla (NSDQ: TSLA) has dropped by a third since peaking at $900 just two months ago.

With the stock market at record highs, it is difficult to find growth stocks at reasonable prices. However, there is one sector of the market that appears undervalued to me. Even better, it may be about to get a $2 trillion infusion of cash from Uncle Sam.

To be sure, negotiating the particulars of a spending bill of that magnitude will be a bare-knuckle brawl in Congress. But in the end, it is likely that some form of Biden’s “Build Back Better” plan will be passed during the first half of this year.

Not all of that money will be spent right away. But the plan is front-end loaded so most of it is spent within the next couple of years. That’s a lot of money in a relatively short period of time. The impact it will have on the companies doing much of that work should be profound.

You might think infrastructure stocks would be soaring higher on that news. That is not the case. At the end of last week, the SPDR S&P Global Infrastructure ETF (GII) had gained only 2.7% thus far this year.

That tepid performance is not because infrastructure stocks jumped last year in anticipation of this development. In fact, GII finished last week almost precisely where it was 13 months ago when I last wrote about it. 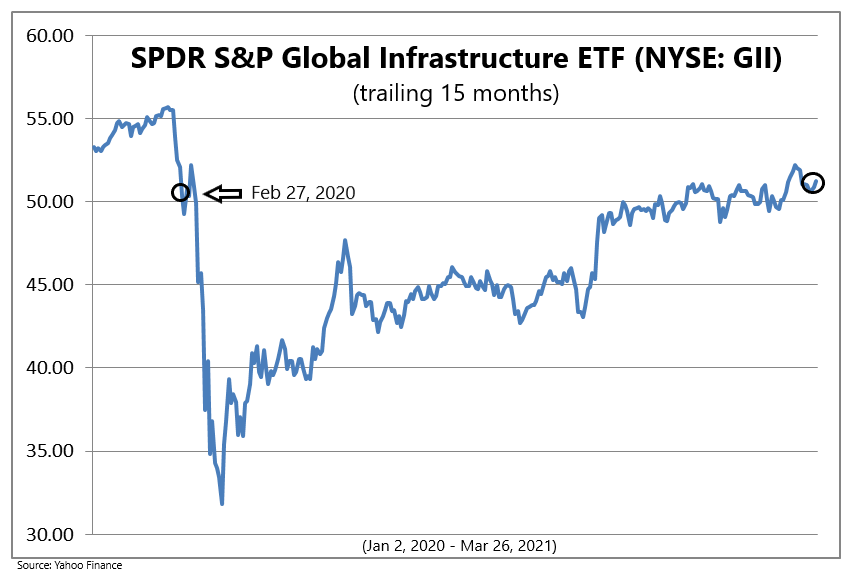 Utility stocks make up 36% of GII’s portfolio holdings. The energy sector comprises 20%, and industrial companies account for 44% of total assets.

The energy sector is hot. So far this year, the Energy Select Sector SPDR Fund (XLE) has gained more than 30%. Industrial stocks are doing pretty well, too. The Industrial Select SPDR Fund (XLI) is up 10% over the first three months of 2021.

Even “boring” utility companies are doing okay as evinced by the 5% return of the Utilities Select Sector SPDR Fund (XLU) so far this year. That works out to a 20% gain over an entire year.

Each of those funds has performed admirably. But for some reason, there just isn’t nearly as much love for a fund that consists of all three of those sectors.

While GII has gone nowhere over the past 13 months, the S&P 500 Index has gained 34%. It is as if Wall Street does not believe that the infrastructure sector is worthy of its attention

I don’t know why that is, but I believe it creates a short-term investment opportunity. The easy way to play the trend is to simply buy shares of GII. But there is another strategy that could generate significantly higher returns.

The strategy I suggest is using a call option to profit from a big move in infrastructure stocks. A call option increases in value when the price of the underlying security goes up.

You cannot buy call options on GII. But you can buy them on the iShares Global Infrastructure ETF (IGF). IGF is very similar to GII in both portfolio composition and performance.

A few days ago while IGF was trading near $44, a call option that expires on July 16 at the $45 strike price could be purchased for $2. For this trade to be profitable, IGF must rise above $47 by the expiration date. If IGF rises to $49 by expiration, this option would be worth $4.

That works out a 100% gain in less than four months on the option. But if you own shares of the fund, that same price movement would result in a gain of only 11%.

Of course, this option could also expire with no value if IGF does not appreciate at all. In this case, I think that is a risk worth taking.

Over the next few months, infrastructure spending will become a “front-burner” issue for just about every elected official in the country. It will be the lead story on the nightly news and the main topic of debate among talk show pundits.

All that attention can only be good for the sector. No matter how you choose to play it, the infrastructure sector looks like a safe bet in an otherwise risky market.

Among the key areas that Biden’s infrastructure plan targets is the roll-out of 5G (“fifth generation”) wireless technology. Our investment team has found a technology company that’s an indispensable part of the 5G ecosystem.

This 5G infrastructure play is little noticed by Wall Street. The time to buy shares is now, before the investment herd catches on. For details click here.