Gunfight at the CPI Corral

Back in 1993, bond traders led a sell-off in Treasury securities over the new Clinton administration’s proposals to boost government spending. The market action gave rise to a term: Bond Vigilante.

The so-called Bond Vigilante describes a bond market investor who “protests” (so to speak) monetary or fiscal policies he considers inflationary by selling bonds, which in turn boosts yields. In the bond market, prices move inversely to yields.

Bond Vigilantes sell bonds in response to signs that fiscal deficits might be getting excessive. As bond prices fall and yields rise, borrowing becomes costlier, which in turn encourages lawmakers to spend less.

From October 1993 to November 1994, 10-year Treasury yields climbed from 5.2% to over 8%, fueled by worries about federal spending under Clinton. It became known as the Bond Market Massacre.

In response, the Clinton administration abandoned its spending plans and worked with Congress to lower the federal deficit. It worked. By November 1998, 10-year yields dropped to about 4%. Calm was restored.

Reading the headlines these days, it’s déjà vu all over again. Below, I explain what it means for investors in 2021.

Yields on 10-year Treasury notes have dramatically climbed in recent weeks, a clear indication that traders are worried that the economy could overheat and spark inflation. The yield topped 1.7% Monday, lifting the U.S. dollar.

The White House recently won passage of a $1.9 trillion stimulus bill and now seeks to spend at least another $3 trillion on infrastructure, renewable energy technologies, education, and other social investments.

We’ve seen this movie before, when yields sharply rose in 1993 as the Clinton team weighed a similarly expensive package of government programs. Clinton capitulated and opted instead to cut spending.

A centrist Democrat in the Biden mold, Bill Clinton at the time bitterly complained to his advisors: “We’re all Eisenhower Republicans here, and we are fighting the Reagan Republicans. We stand for lower deficits and free trade and the bond market.” With sarcasm, Clinton added: “Isn’t that great?” (By today’s standards, Eisenhower Republicans were moderate.)

Watching the bond market lately has brought the Clinton era back to my mind. Yields on the 10-year Treasury note last week reached 1.75% before falling back. That’s a steep rise from less than 1% at the beginning of 2021.

But keep in mind, yields right now remain historically very low. Two years ago, the 10-year Treasury paid 2.5%. During the Clinton administration, as I previous noted, yields on 10-year Treasurys had risen to exceed 8%.

I don’t foresee a return to the Clinton years. Nor to the Nixon-Ford-Carter era, for that matter. To be sure, inflation was traumatic in the 1970s. I lived through “stagflation” and I can tell you, it was about as comfortable as a polyester leisure suit. 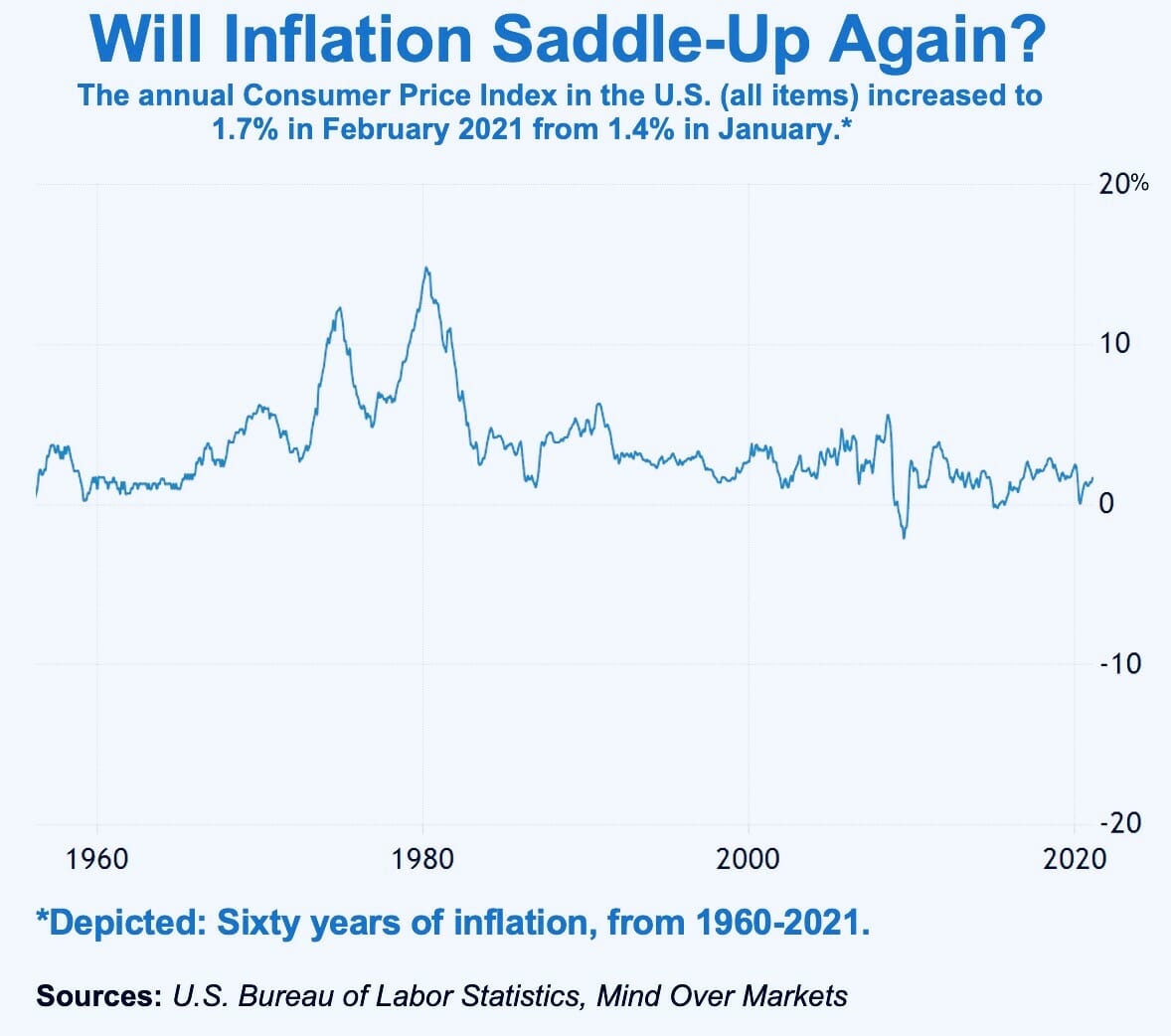 But that was then; this is now. Globalization and e-commerce nowadays make it considerably harder for companies to raise prices. The decline of labor unions, the spread of factory automation, and intense competition from overseas manufacturing keep a lid on wage growth. The oil shocks of the 1970s helped drive inflation, but since then we’ve become less dependent on foreign oil.

As the above chart shows, inflation is currently quite low. With the U.S. unemployment rate hovering at 6.2%, there’s plenty of slack in the economy to keep inflation tame into the foreseeable future.

Watch This Video: The Bull Case for 2021

It’s my view that fears of inflation are overblown. Interest rates are rising but within the long-term context they’re still scraping bottom. The bond vigilantes have limited fire power.

S&P Global recently predicted that Biden’s $3 trillion “Build Back Better” infrastructure plan would create 2.3 million jobs by 2024, pump $5.7 trillion into the economy (which would represent 10 times what was lost during the pandemic-induced recession), and boost per-capita income by $2,400.

If you get too cautious now as an investor, you’ll be leaving money on the table. To help you fully leverage the accelerating recovery, our investment team has put together a special report: “5 Red Hot Stocks to Own in 2021.”

In this report, we provide the names and ticker symbols of the highest-quality stocks to buy for the coming economic boom. Click here for your copy.

PS: Do you have any views, concerns or questions about The Great Inflation Debate? Send an email to: mailbag@investingdaily.com.