Weed’s gonna make a brand new start of it,

Apologies to Frank Sinatra. Marijuana wasn’t Frank’s anodyne of choice. But his iconic anthem New York, New York comes to mind right now, as the state of New York gets ready to legalize recreational marijuana. I had some fun with the lyrics, but serious business is at stake.

Marijuana legalization is on a fast track in New York State. Less than a week after a revised bill to legalize marijuana in New York was released, formal hearings have been scheduled for the proposal in three committees on Tuesday, March 30. Floor votes are poised to immediately follow action by the panels.

Canna-billions are up for grabs. According to Grandview Research, New York’s marijuana market could be worth $7.07 billion by 2025, up from $1.8 billion in 2018. Cuomo’s administration has estimated legalization could bring the state about $350 million every year in tax revenue. Just in New York City alone, legalizing marijuana could rake in tens of millions for the city budget through taxes.

As with California, New York is a cultural and economic bellwether. Marijuana legalization in New York will probably encourage other states to take similar actions, especially when Cuomo’s counterparts witness the jobs and tax revenue generated by legalization.

The New York Assembly Codes and Ways & Means Committees and the Senate Finance Committee are scheduled to start considering the legislation on Tuesday. Both the Assembly and Senate are controlled by Democrats, a political party that’s marijuana-friendly.

Assembly Majority Leader Crystal Peoples-Stokes (D), chief sponsor of the bill in the Assembly, said on Monday that she expects a vote in her chamber will take place Tuesday after the committees move the bill. Gov. Cuomo will sign the measure “right away,” she assured the press. Her March 29 tweet broke the news: 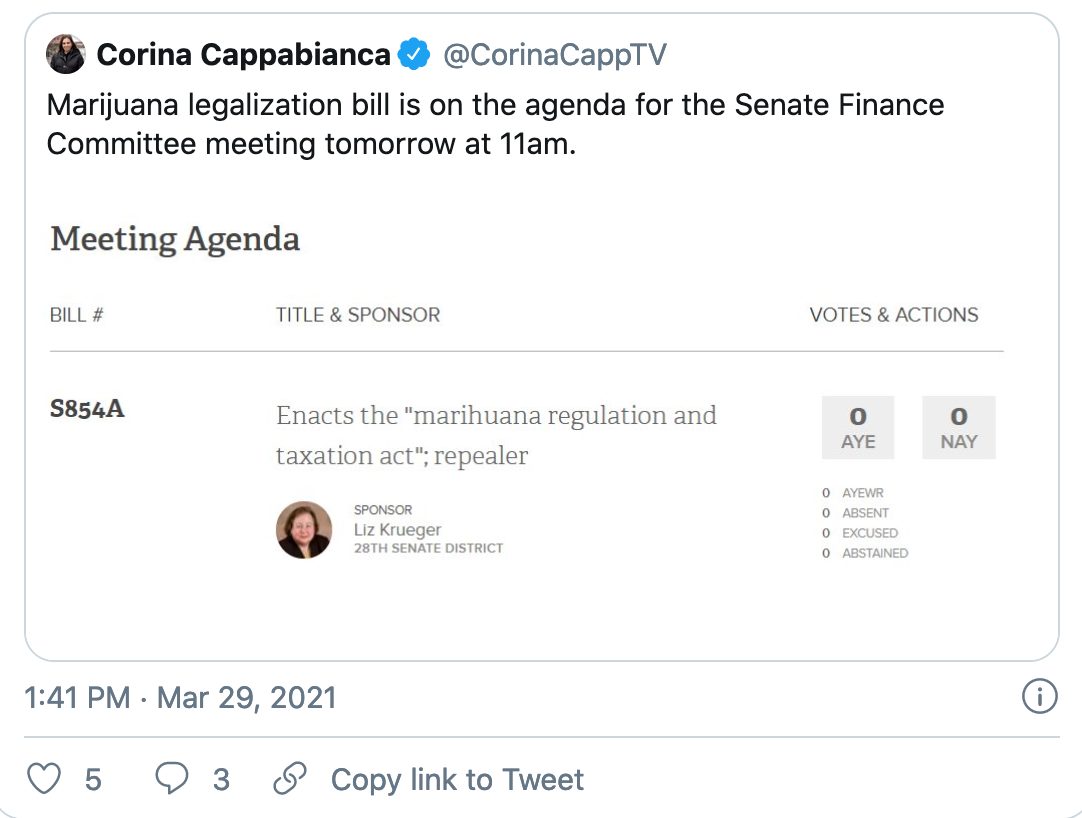 After weeks of negotiation between Cuomo and lawmakers in the Assembly and Senate, the new legislation to legalize marijuana in New York was released on Saturday. Called the Marijuana Regulation and Taxation Act (MRTA), the bill legalizes the production, distribution, and use of marijuana.

The bill states: “The MRTA restricts vertical integration to provide the maximum amount of space for new companies to develop and contribute to a New York–focused market. Similar to New York’s craft wine and beer industry, which has seen phenomenal growth, the MRTA also encourages small-scale production and sale via micro-license.”

Use of cannabis is legal in New York State for medical purposes, whereas recreational use is not. Cuomo has long pushed for adult-use legalization.

Upon release of the bill’s details on March 27, Gov. Cuomo emphasized the social justice aspect:

“For generations, too many New Yorkers have been unfairly penalized for the use and sale of adult-use cannabis, arbitrarily arrested and jailed with harsh mandatory minimum sentences.

After years of tireless advocacy and extraordinarily hard work, that time is coming to an end in New York State. Legalizing adult-use cannabis isn’t just about creating a new market that will provide jobs and benefit the economy, it’s also about justice for long-marginalized communities and ensuring those who’ve been unfairly penalized in the past will now get a chance to benefit. I look forward to signing this legislation into law.”

Looking to profit from the trends that I’ve just described? Investment opportunities in marijuana abound, but you need to pick the right stocks. Download our special report on marijuana investing.