“The Hype Cycle” as an Investment Tool

As FDR said during the depths of the Great Depression: “The only thing we have to fear, is fear itself.”

Case in point: The fear of inflation is proving more pernicious than actual inflation. The major U.S. stock market indices are under pressure, as bond yields rise amid worries that the latest spending plan from the White House, coming on top of previous stimulus measures, will ignite inflation.

President Biden is expected on Wednesday to unveil a more than $2 trillion package focused primarily on physical infrastructure, with huge investments in housing, clean energy, and advanced manufacturing.

Biden’s plan is assured of eventual passage in the Democratic-controlled House and stands a good chance in the 50-50 Senate, where Democrats have indicated they’ll get it passed through a legislative process known as reconciliation if the bill lacks sufficient GOP support to overcome a filibuster.

I’m not worried that we’ll see runaway inflation, but let’s put aside the inflation argument for today. I’ve amply covered that topic in previous articles.

Read This Story: Reader Forum: Is Inflation a Major Threat?

There’s another fear I want to address today. There’s a talking point finding expression in the media and on the floor of Congress that President Biden’s multi-trillion-dollar “Build Back Better” plan will squander taxpayer money on pie-in-the-sky technological concepts. The notion is that federal funds will be used to pursue a socialistic industrial policy that picks economic winners and losers. That’s wildly inaccurate.

In reality, the ambitious spending plan targets areas already on the productive slope of the development bell curve. For answers, let’s turn to the Gartner Hype Cycle. Below, I’ll explain how the cycle works and how to use it as an investment tool.

The Hype Cycle is a graphical presentation developed and used by technology research and advisory firm Gartner for representing the maturity, adoption and social application of specific technologies. 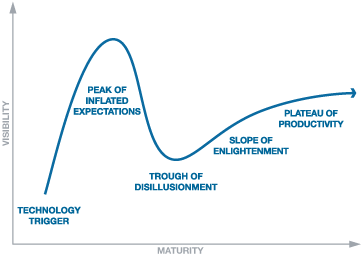 2) Peak of Inflated Expectations: Early publicity spawns a flurry of success (and failure) stories. Some companies adapt; others fall by the wayside.

3) Trough of Disillusionment: Interest diminishes as reality fails to live up to the hype. A shake out ensues, but the smartest early adopters survive and continue to invest and experiment.

The Biden plan focuses on industries that have already passed through their “hype” period and now occupy phases four or five, which in turn translates into sustainable, long-term growth.

The Hype Cycle can be incorporated into your investment toolkit to take advantage of momentum. Fear and greed always move markets, but in the early developmental stage of a technology where information can be lacking, the effect of these emotions are considerably amplified in share prices.

If an industry is in the hype phase, you could decide to take on more risk by riding the momentum. Of course, some companies will be winners; others won’t. Is a segment in a “phase three” trough of despair? If yes, short the momentum and buy on the dips.

There’s no precise formula as to how you can leverage the Hype Cycle. However, billionaire super-investor Warren Buffett probably put it best: “Opportunities come infrequently. When it rains gold, put out the bucket, not the thimble.”

Under the Biden plan, poised for a shot in the arm are proven but still growing segments such as solar and wind power; EVs; robotics; 5G (“fifth generation”) wireless; and the Internet of Things.

An instructive example is solar power. The infrastructure for the solar industry is now pervasive and entrenched, leading to a “price decoupling” of solar and fossil fuels. Solar and other renewable energies are now part of the energy status quo and no longer need high oil and gas prices to attract users.

Another example is ultra-fast 5G wireless technology. In previous articles, I’ve devoted ample editorial coverage to the roll-out of 5G wireless and the money-making opportunities it provides.

Our investment team has found one little-known company with the fix for 5G’s “fatal flaw.” The firm’s stock could hand you a windfall within the next six months. Click here for details.