Welcome to my video presentation for Monday, April 5. The article below fleshes out my themes in greater detail.

In coming weeks, the pace of economic recovery and political events in Washington will help determine whether investors should pull back or whether, to cite a Cajun expression, it’s time to laissez les bons temps rouler.

In the first quarter that just ended, all three major U.S. stock market indices rose: the Dow Jones Industrial Average by 7.8%, the S&P 500 by 5.8%, and the tech-oriented NASDAQ by 2.8%. The small-cap Russell 2000 rose in Q1 by 12%. When small-caps outperform, it’s a sign that investors are optimistic about economic growth.

The first quarter witnessed a broad rally, with all 11 S&P 500 sectors posting a positive return. The top performing sector was energy (+30.8%), an indication that the overall economy is on the mend. Energy has rotated from laggard to leader.

The Biden rally rolls on, exceeding to date the market’s performance during the last two presidents. The S&P 500 rose by 4.6% during the first 50 trading days of the Biden presidency, from market close on January 19 to market close on March 31. Trump’s first 50-day increase was 4.4%, whereas President Obama was down 6.1%. Obama had the disadvantage of coming into office during the Great Recession.

Negative scenarios that could trigger a sell-off include a worsening of the pandemic, the failure of Biden’s proposed infrastructure plan to pass, or a significant rise of inflation.

Regardless, the holiday-shortened week provided an upbeat ending to the robust first quarter, with the S&P 500 on Thursday surpassing the 4,000-point mark for the first time ever. Stocks are maintaining their post-election momentum (see chart). 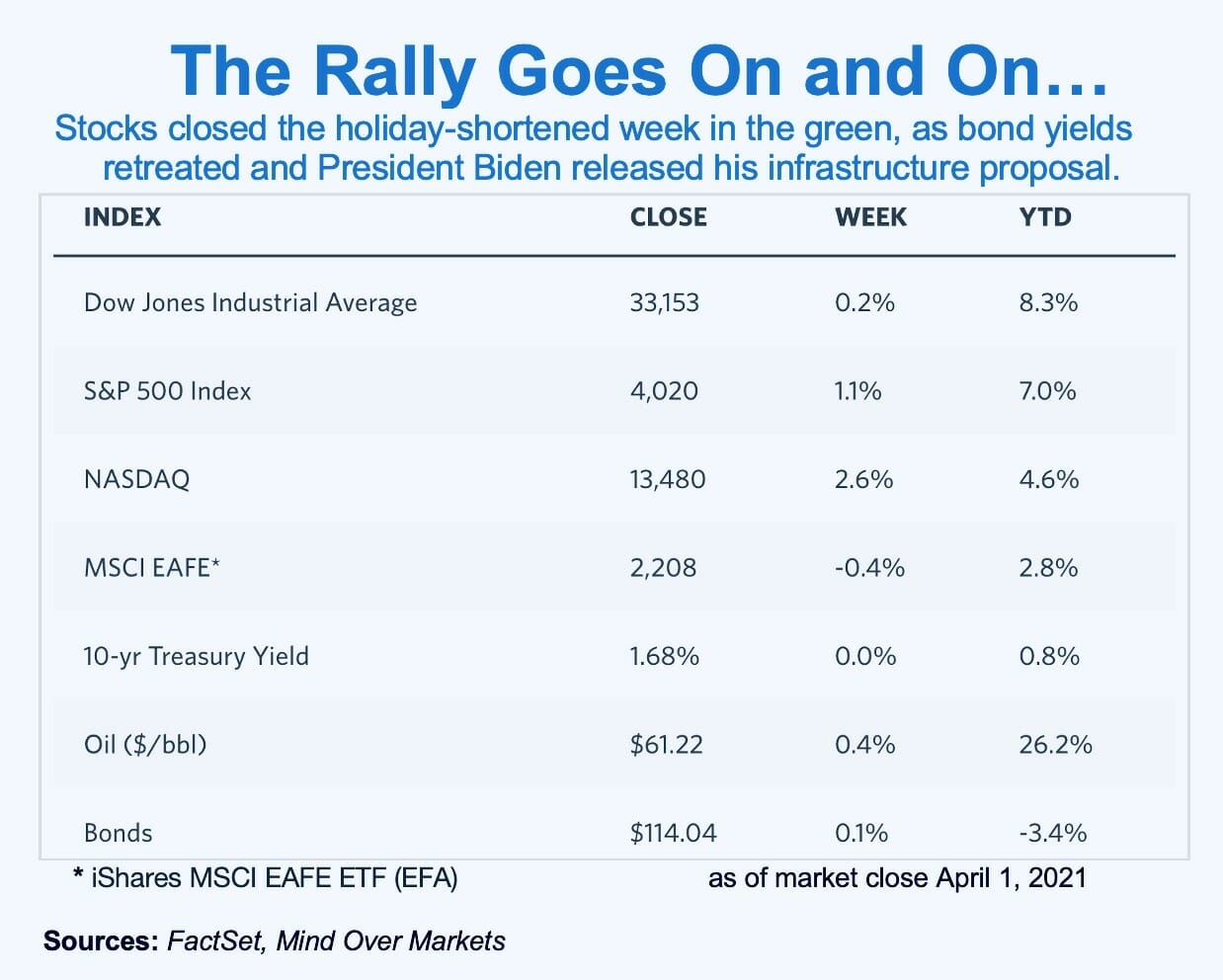 Economic reports last week were indeed encouraging. Consumer confidence climbed to its highest level since the coronavirus outbreak and manufacturing activity expanded in March at the fastest rate since 1983.

Monetary stimulus also is shoring up the bull market. The Federal Reserve has repeatedly indicated that it has no intention of removing the proverbial punch bowl from the party anytime soon.

Americans already are getting back to work, as lockdowns are eased and businesses reopen. The U.S. Bureau of Labor Statistics reported Friday that nonfarm payrolls rose by 916,000 in March and the unemployment rate declined to 6% (see chart). 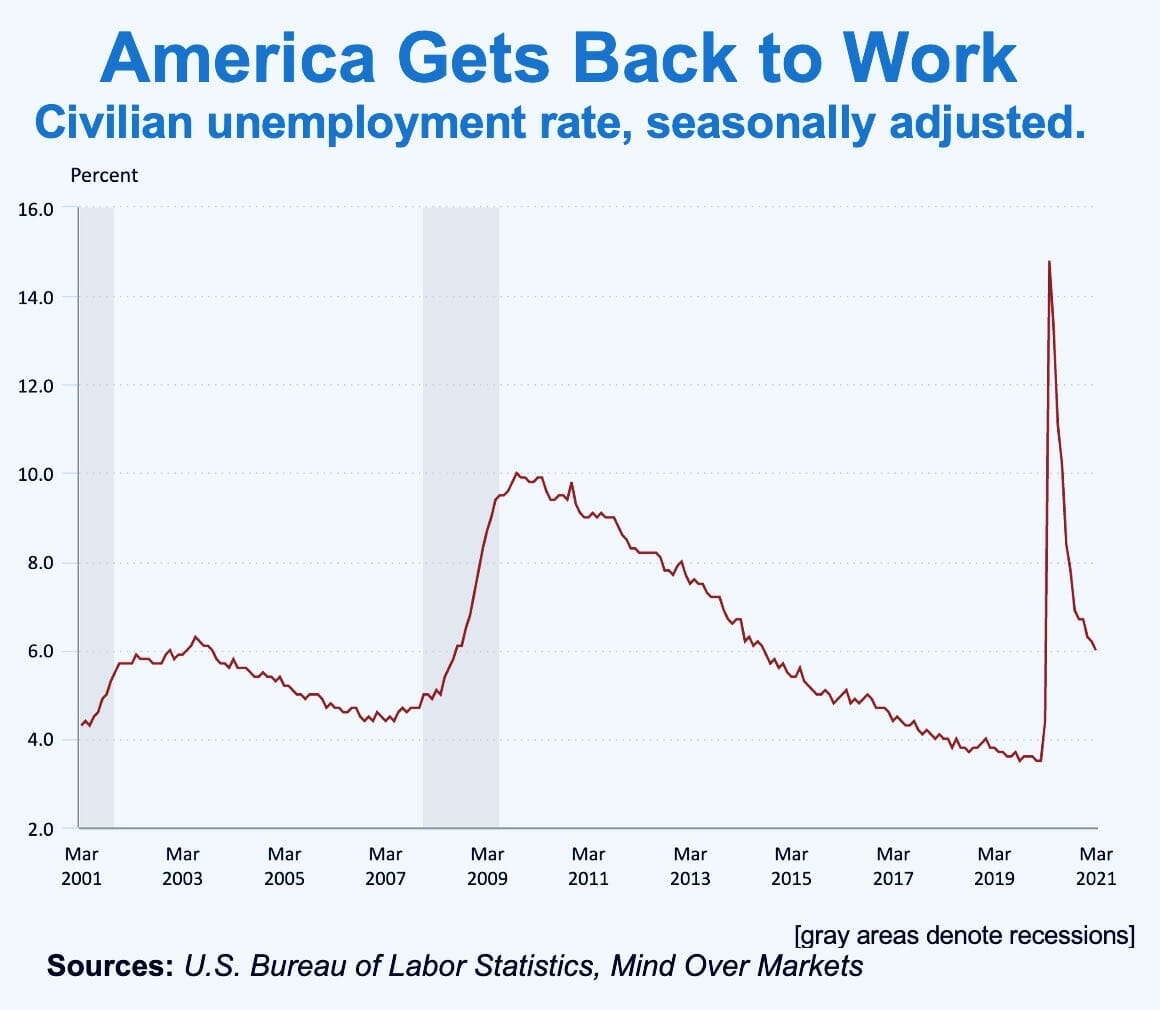 Jobs growth blew past the consensus estimate for 675,000, representing the fastest since August 2020. Gains were strongest in leisure and hospitality, while construction soared by 110,000. Revisions also added 156,000 jobs to the totals for January and February. It’s important to note that this data was compiled before stimulus checks arrived and increasing vaccinations prompted the opening of more businesses.

The government also reported a 0.1% decline in average hourly earnings for March compared to the expected gain of 0.1%. Compared to March 2020, average hourly earnings increased 4.2% versus an expected gain of 4.5%. That means the jobs market is mending but not at an inflationary rate. It’s the sort of “Goldilocks” balance (not too hot, not too cold) that keeps the bond market calm.

Paving the road to profits…

Biden’s “Build Back Better” package is focused primarily on physical infrastructure, with huge investments in housing, clean energy, and advanced manufacturing. A large chunk of the spending would go to transportation (see chart). 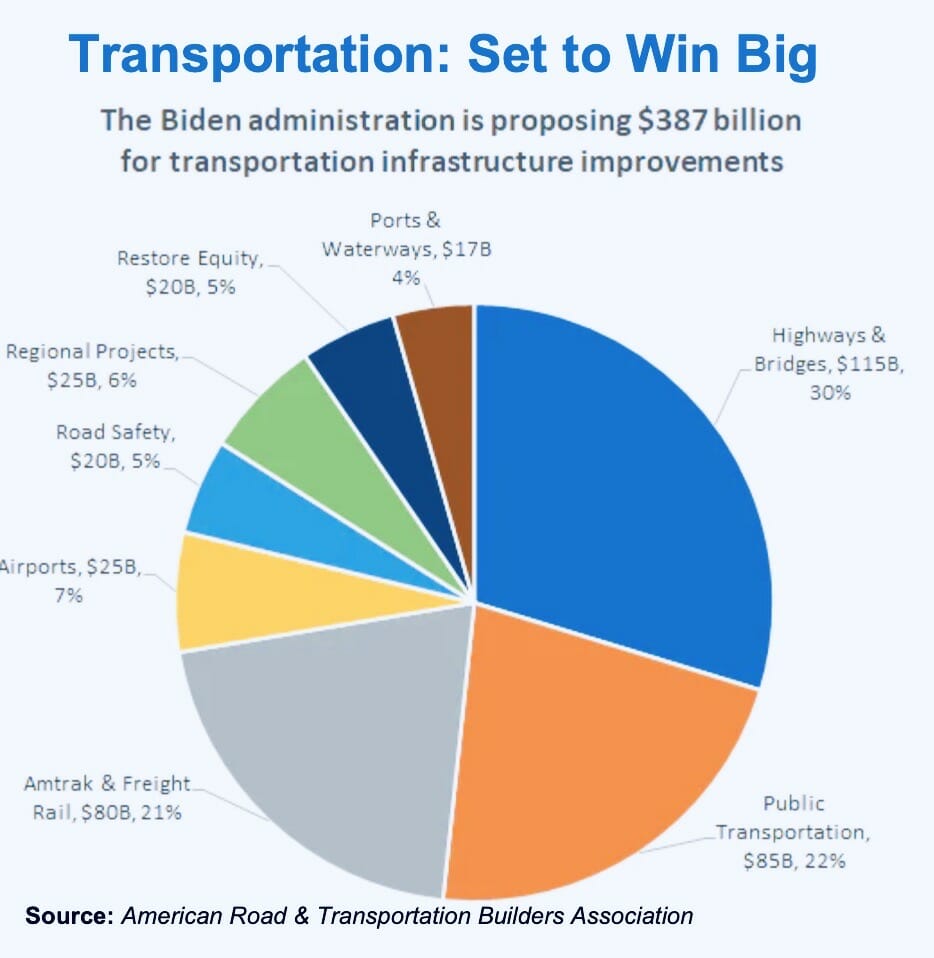 Deteriorating roads, rail lines, and airports are a global problem, which makes spending on transportation an investment trend with multi-year momentum.

The non-partisan group Building America’s Future reports that one third of America’s major roads are in poor or mediocre condition and 45% of major urban highways are congested.

A recent analysis from the American Road & Transportation Builders Association has found that over 47,000 bridges in the U.S. are falling apart because they’re “structurally deficient.”

Federal infrastructure spending will pave the road to profits for companies involved in public works. But it’s not just in America. China and several other nations are stepping up their spending on public works, a major investment theme for 2021 and beyond. And yet, many construction sector stocks are undervalued, which means you should consider them now.

Editor’s Note: Looking for gains that don’t just beat the market…but crush it? Turn to my colleague J.R. Butts.

J.R. Butts is chief investment strategist of our premium trading service, Maximum Profit. After months of painstaking research, he has discovered an odd blip that regularly occurs in the markets. He calls it the “Alpha Anomaly” and he has leveraged it to generate gains for his followers of 183%, 242%, even 331% or more.