In the words of legendary investor Jesse Livermore, who lost his fortune during the 1929 stock market crash: “There is nothing new in Wall Street. There can’t be because speculation is as old as the hills. Whatever happens in the stock market today has happened before and will happen again.”

The financial melee over “meme” stocks, the Archegos Capital debacle, the wave of SPACs, the cryptocurrency craze…are we witnessing the classic signs of a speculative bubble?

Due to massive monetary and fiscal stimulus, the markets are awash in liquidity. Investors are eager to put all that cash to work, pushing equities to record highs.

I’m generally bullish over the stock market’s prospects this year, as the economic recovery picks up steam and corporate earnings rebound.

However, we’ll probably witness intense volatility and a few dips along the way. Below, I show you a protective measure to take now, in case we face trouble ahead.

The Institute for Supply Management (ISM) reported Monday that its non-manufacturing activity index rebounded to a reading of 63.7 last month, a record high and beating expectations. The U.S. Bureau of Labor Statistics reported last Friday that nonfarm payrolls rose by 916,000 in March and the unemployment rate declined to 6%.

The march of the lemmings…

The rally likely enjoys long-term momentum, but over the short term, several recent manifestations of manic investor behavior suggest that the market is heading toward a cliff. Case in point: In late January, shares of video game retailer GameStop (NYSE: GME) suddenly skyrocketed following a buying binge organized by retail investors seeking to defend GME from funds shorting the company.

Shares of GameStop have since fallen back to earth, but the lemming-like behavior of the GameStop enthusiasts raises disturbing questions about speculative investment funds and online trading platforms. Inexperienced day traders continue to plow their stimulus checks into social media-driven stocks, regardless of underlying fundamentals.

The collapse of the Archegos fund is another example of how extreme liquidity can generate volatility and disastrous outcomes. Archegos began to collapse in late March when its bets on certain stocks unraveled, prompting investment banks that had lent the hedge fund money to call for more margin. The fund didn’t have sufficient liquidity to meet the call and several large banks are on the hook for billions.

Then there’s the proliferation of special purpose acquisition companies (SPACs). These are shell companies formed solely to merge or acquire another business and take it public. It’s a cheaper, faster alternative to an initial public offering (IPO ). Investors get a piece of the action by writing what amount to blank checks to SPACs, which can take years to eventually find and make acquisitions.

Early investors can make a fortune, but as opposed to the situation with IPOs, there’s scant regulatory oversight. Hedge funds and Wall Street insiders tend to get a much sweeter deal than average retail investors. You’re also flying blind, because you don’t know what kind of company will eventually get acquired. SPACs raise funds before they identify acquisitions.

Another red flag: the dizzying rally in cryptocurrency. The best-known cryptocurrency, Bitcoin (BTC), has risen from $5,000 at the end of 2018 to highs above $40,000 in 2021. But there’s no inherent value to cryptocurrency. Bitcoin and its thousands of counterparts have value because people agree that they do. If governments decide to ban crypto to protect their fiat currencies, it’s game over for crypto’s adherents.

All of these examples reflect how the tsunami of liquidity is driving reckless behavior on Wall Street. The Federal Reserve continues to pursue ultra-dovish monetary policy and its balance sheet currently approaches $8 trillion (see chart). 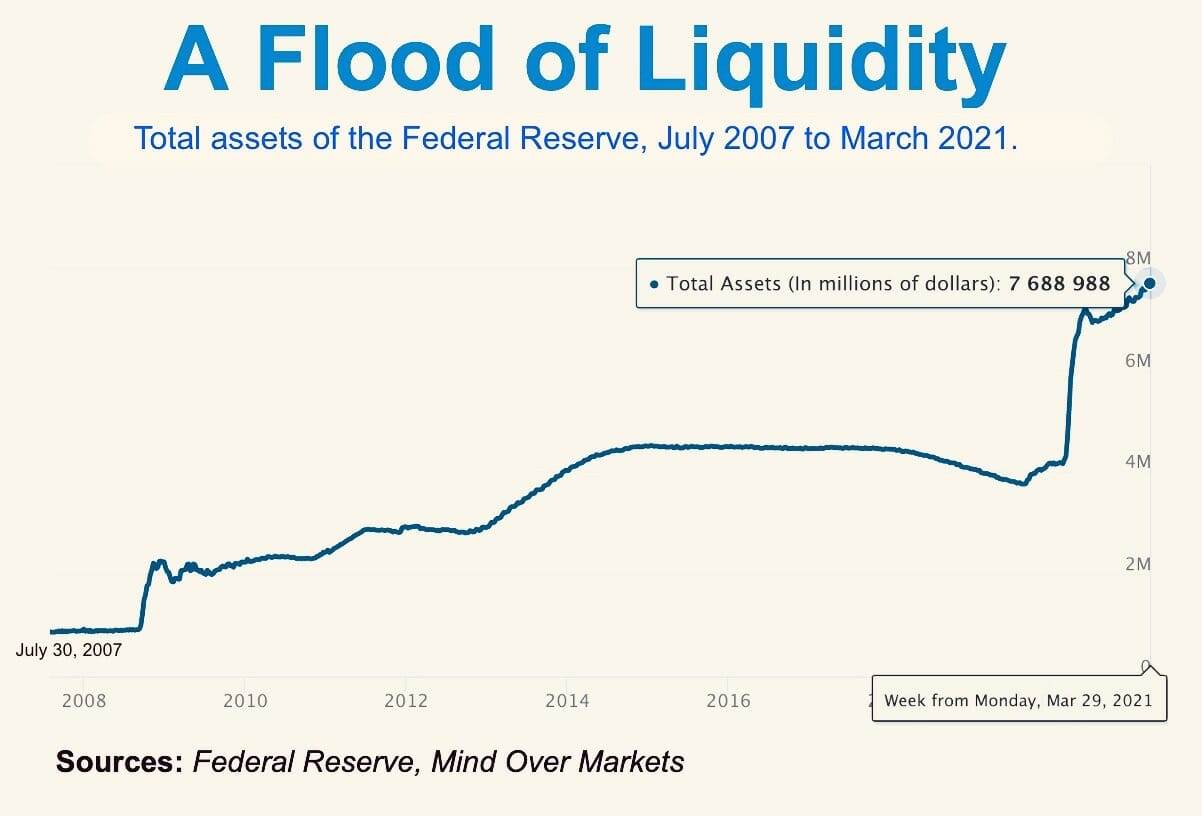 Also inflating the asset bubble is fiscal stimulus on a scale unseen since the New Deal. To combat economic damage caused by the coronavirus pandemic, President Joe Biden and his predecessor Donald Trump signed huge spending packages, with probably more to come in the form of Biden’s newly unveiled $2 trillion infrastructure plan.

Much of the liquidity-fueled speculation I’ve just described entails little transparency. That’s a big worry. But you can protect your portfolio by increasing exposure to a time-proven safe haven: dividend stocks.

You don’t have to be an income investor to love dividend-paying stocks. Dividend-payers are vehicles for long-term wealth building, but they’re also hedges against risk because companies with robust and rising dividends by definition boast the strongest fundamentals.

Reasonably valued, high-yielding equities offer the trifecta of income, growth and safety, if you pick the right ones. For our list of rock-solid dividend stalwarts, click here now.