Until the 1990s, when marijuana laws started to loosen, getting busted for possession of pot in some states carried the potential of a multi-year prison sentence. As a teenager in Massachusetts during the Nixon-Carter era, I witnessed friends getting tossed into the hoosegow just for holding a few joints.

But nowadays, even the nation’s top cops are clamoring for the normalization of marijuana laws.

Recent case in point: Three state attorneys general and the top prosecutor for Washington, DC sent a letter on April 1 (no, it wasn’t an April Fool’s Day joke) to congressional leaders, stating their strong support for legislation that would protect banks that serve state-legal cannabis markets from being penalized by federal regulators.

Rep. Ed Perlmutter (D-CO) is the chief sponsor of the Secure and Fair Enforcement (SAFE) Banking Act in the House, while Senators Jeff Merkley (D-OR) and Steve Daines (R-MT) are sponsoring their chamber’s version. Both were reintroduced last month with significant bipartisan cosponsor lists.

As Rep. Perlmutter puts it: “Thousands of employees and businesses across this country have been forced to deal in piles of cash for far too long.” 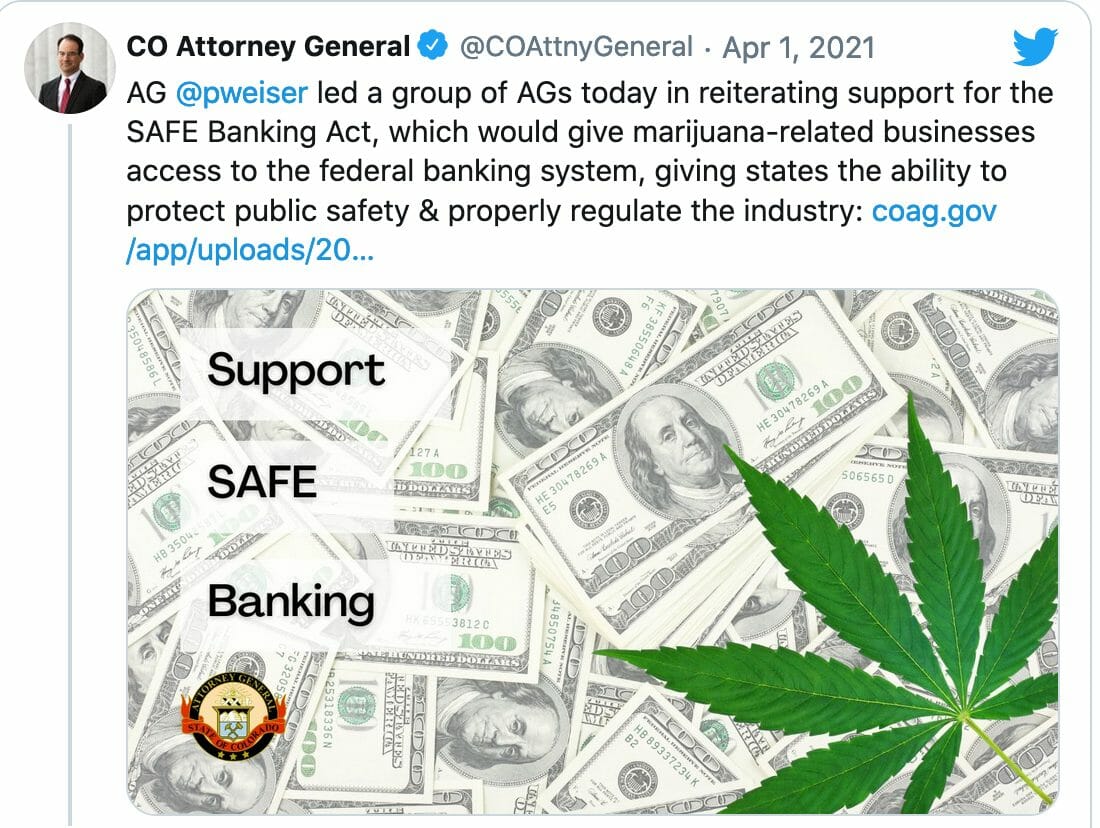 “To address an untenable status quo and recognize on the ground realities, we strongly urge the House of Representatives and Senate to promptly take up and act upon the SAFE Banking Act. Our states’ ability to protect public safety and properly regulate this new and growing industry depends on Congress enacting this vital legislation.

“Without access to traditional financial services, [state-legal marijuana businesses] operate exclusively or primarily in cash, making those businesses targets for criminal activity and hindering efforts to ensure regulatory and tax compliance and track financial flows. This status quo, a rapidly expanding, multibillion-dollar national marketplace without access to the national banking systems, is untenable.”

The Republican attorneys general of North Dakota and Ohio, as well as the Democratic attorney general of Washington, DC, joined Weiser in signing the letter.

The House passed the marijuana banking bill in the previous session of Congress, but it stalled in the Senate when the chamber was under the control of Sen. Mitch McConnell (R-KY), who is ardently anti-marijuana.

McConnell, who has proudly referred to himself as “The Grim Reaper” for his ability to block popular Democratic bills, currently finds himself in the minority. Now that pro-marijuana Sen. Chuck Schumer (D-NY) is Majority Leader, the SAFE Act faces considerably better odds of passage. President Joe Biden is expected to sign the bill if it reaches his desk.

Marijuana companies also face hassles with filing their taxes. Unlike most U.S. businesses, which pay electronically or by check, most marijuana-product firms are compelled to pay their federal and state taxes in cash.

Banks are reluctant to conduct financial dealings with cannabis enterprises, because pot remains banned at the federal level. Bankers are wary of unexpected legal liabilities. Lenders are by nature cautious and they worry about a potential regulatory backlash against pot. This dilemma highlights the industry’s need for legislation to bring marijuana into the financial mainstream.

With cannabis-friendly Democrats in charge of the White House and both chambers of Congress, SAFE’s passage seems assured. The support expressed last week of top law enforcement officials is icing on the cake.