Send in the (Investment) Clowns

Regular readers of my column know that I have a penchant for quoting famous songs that are apropos of current market behavior. Today, rising to the top of my playlist is Stephen Sondheim’s standard, Send in the Clowns.

The three-ring antics of a new wave of inexperienced traders indicate a dangerous juncture in the markets. When social media gossip creates wild market swings, it’s time to get wary.

Neophyte investors whose trading decisions are guided by financially illiterate chatter on message boards have been wreaking havoc in the markets. Bored by lockdowns and quarantines, they’re using their stimulus checks to play the stock market like a lottery. This volatile trading is likely to continue as the appetite for risk-on assets gets stronger.

Don’t get me wrong: I’m generally bullish over the stock market’s prospects in 2021. The economic recovery is accelerating, the job market is improving better than expected, the Federal Reserve has vowed to maintain its accommodative stance, and new fiscal stimulus is probably on the way in the form of President Biden’s infrastructure plan.

Economies are re-opening and consumers are in the mood to spend. The latest manufacturing data show that factories are starting to hum again around the world, especially in the global growth engine of China.

However, the emergence of the “dumb money” is worrying. These are the sorts of investors who run for the exits at the first whiff of bad news, a dynamic that could create a downdraft for the broader market, which hovers at record levels and remains vulnerable to a pullback.

The instant paper wealth generated by “meme” stocks, despite their poor underlying fundamentals, is a contrarian indicator. Hype on financial television encourages the recklessness.

I expect the CBOE Volatility Index (VIX), aka “fear gauge,” to rise in coming months, as anxious investors grapple with an admixture of optimism and fear. Stay invested but stay on your toes. Below, I’ll show you strategic moves that can generate growth but also keep your portfolio on an even keel when the markets get choppy. 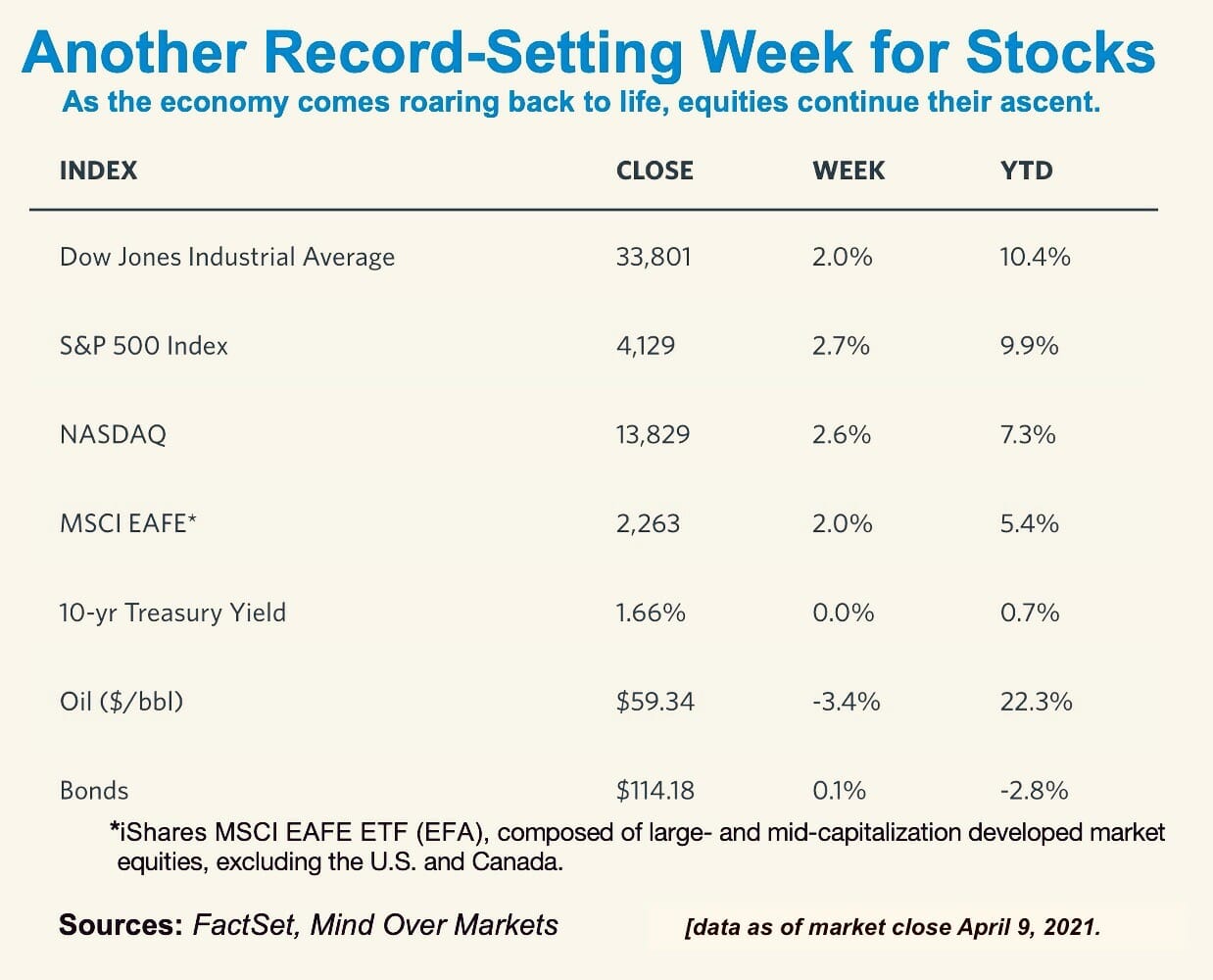 Nonetheless, you should hedge your portfolio against the risk of temporary sell-offs. The quickening pace of vaccination is encouraging but the coronavirus pandemic hasn’t gone away. New variants of COVID-19 are popping up that concern health experts. Unexpectedly bad news about the virus could send highly valued stocks into a temporary tailspin.

There are a growing number of red flags that the bull market is overheating, with indicators of investor risk-taking reaching the highest levels since the fateful years of 2007 and 1999.

According to data from the Financial Industry Regulatory Authority, by the end of February investors already had leveraged their portfolios with borrowed money to the tune of $814 billion, a record number. That’s a 49% year-over-year increase, the largest jump since 2007. The previous high was during the dot-com bubble in 1999. The following chart shows the sharp rise in leverage: 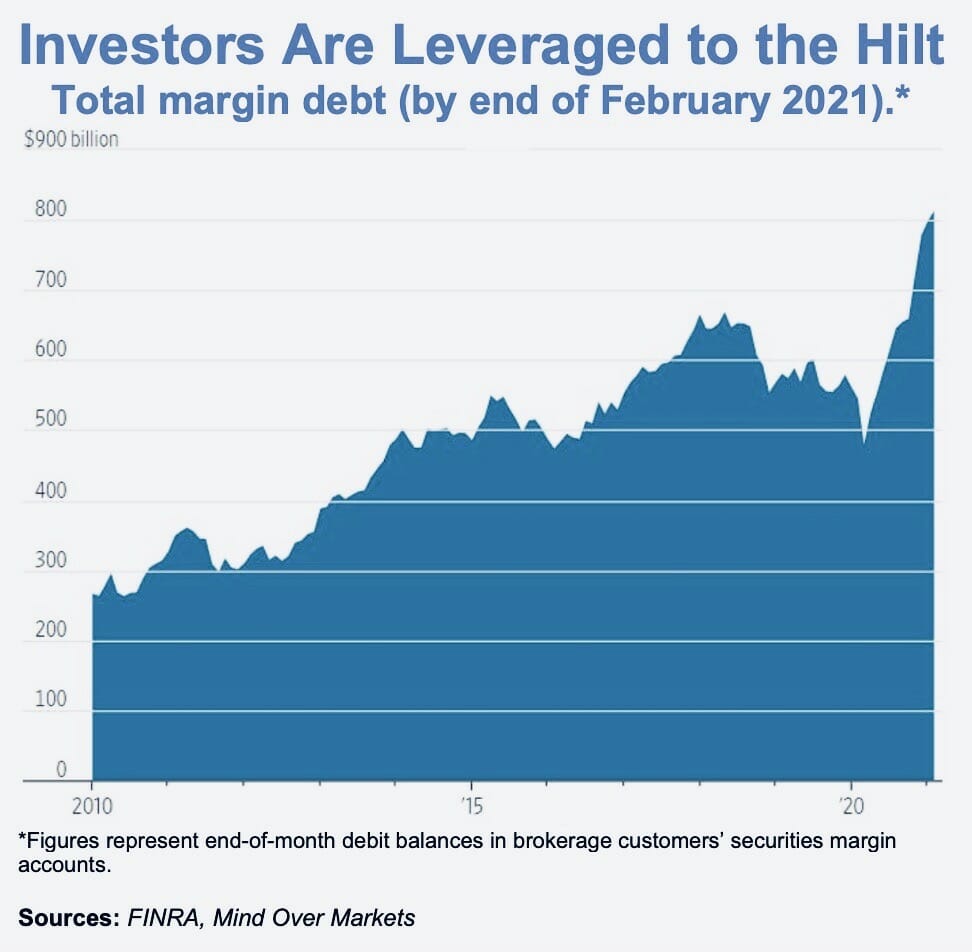 Over the past four months alone, margin debt has surged by $154 billion, a record increase that has helped push equities to historic highs.

And yet, valuations aren’t too far out of whack. For the first quarter of 2021, the estimated earnings growth rate for the S&P 500 is 24.5%. What’s more, the U.S. economy is strongly bouncing back. Federal Reserve data indicate that U.S. gross domestic product growth could hit 10% in Q1 and that’s even before passage of Biden’s infrastructure plan.

The verdict: Bullishness is warranted but so is caution. Make sure your portfolio is properly diversified, with the right allocations. Put aside plenty of cash. Under current conditions, sensible allocations (as a general rule of thumb) would be 45% cash, 30% stocks, 15% hedges, and 10% bonds.

Value outperformed growth by 10 percentage points in Q1 and I expect the movement toward value to continue in Q2. I recommend that you rotate toward undervalued sectors (e.g., basic materials, consumer cyclicals, and communication services) and away from overbought large-cap “darlings” in hot but generally still appealing sectors (e.g., technology and health care).

You should also consider the investment strategies of our colleague Robert Rapier. If you’re looking for a way to stay bullish without undue risk, his methods are for you.

Up, down, sideways… even in the face of rising interest rates… tech selloffs… imploding hedge funds… and anything else Mr. Market throws at you, Robert’s trades are income-generating machines.

We’re about to unveil an exciting new offer from Robert Rapier. His phenomenal track record makes a lot of so-called “experts” on Wall Street look like, well, clowns. Watch for details, soon.