Inflation, The Next Big Villain?

Early in the movie, henchmen of the evil syndicate SPECTRE sit in a briefing room and report their profits from nefarious activities. The sums are laughably small (hence the running joke in the Austin Powers spoofs). Even the big scheme, to ransom two stolen atomic bombs for 100 million British pounds, seems pitiful. I decided to crunch some numbers.

The real villain here is inflation.

The following chart depicts the equivalence of $100 throughout the years due to inflation and CPI changes: 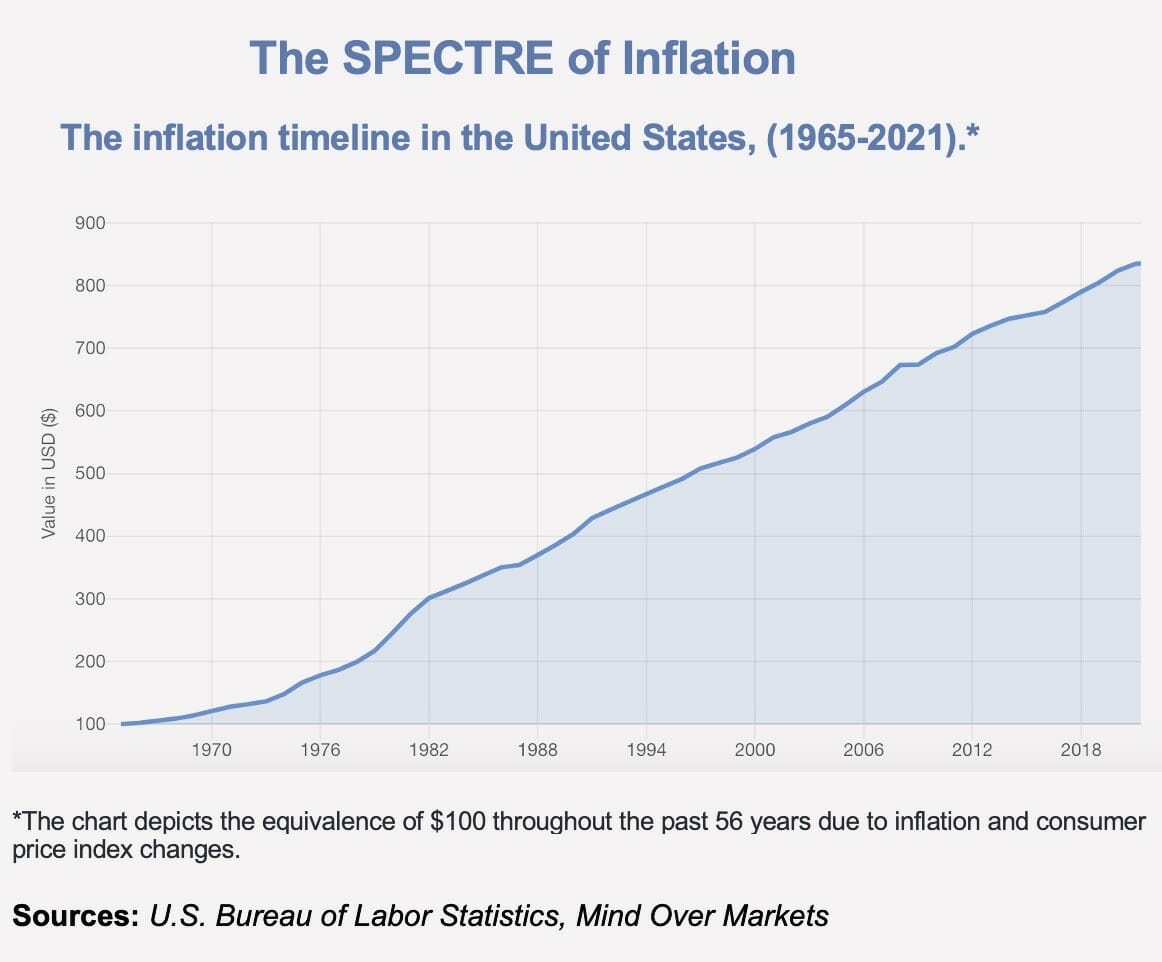 The lesson, courtesy of the 007 franchise: Over time, inflation can devastate your nest egg and erode your investment returns. A dollar today only buys about 12% of what it could buy back in 1965. And that’s criminal.

You should constantly remain aware of what large investment houses and asset managers are thinking, because they tend to set new trends given the sheer size of their trades.

The major institutional investors are now buying investment hedges in anticipation of inflation, which means that independent investors who act too late may get crowded out of buying inflation-proof securities at reasonable values.

While each individual investment should always be evaluated using an objective method (such as price-to-earnings, discounted cash flow or return on equity), it’s also shrewd to follow the trends that are shaping the investment universe.

I think current fears that we’ll witness hyperinflation are overblown. Despite massive fiscal and monetary stimulus, there’s still sufficient slack in the economy to keep a lid on prices. That said, inflation is on the rise and you should incorporate inflation protection in your portfolio.

Read This Story: Prepare Now For Inflation (Before It’s Too Late)

The good news is, inflation projections for 2021 remain low. The Federal Reserve projects that core inflation, which excludes the volatile costs of food and energy, will run at about 2.2% in 2021, up from 1.6% at the end of 2020.

The major driver behind inflation right now are rising energy prices, but the recovering of the energy patch is beneficial for the overall stock market because it denotes a return to economic health. Corporate top and bottom lines are getting stronger, as economies re-open and consumers resume activities that had been prohibited during quarantines.

Corporate earnings on the rebound…

FactSet estimates that S&P 500 companies will report earnings per share (EPS) growth of at least 28% for the first quarter of 2021, which would be the highest EPS growth reported by the S&P 500 in more than 10 years.

The S&P 500 stock index hovers at a record high and on April 8 surpassed 4,000 for the first time. However, according to the consensus on Wall Street, stocks haven’t peaked yet. Industry analysts in aggregate predict the S&P 500 will rack up a price increase of nearly 10% over the next 12 months (see chart). 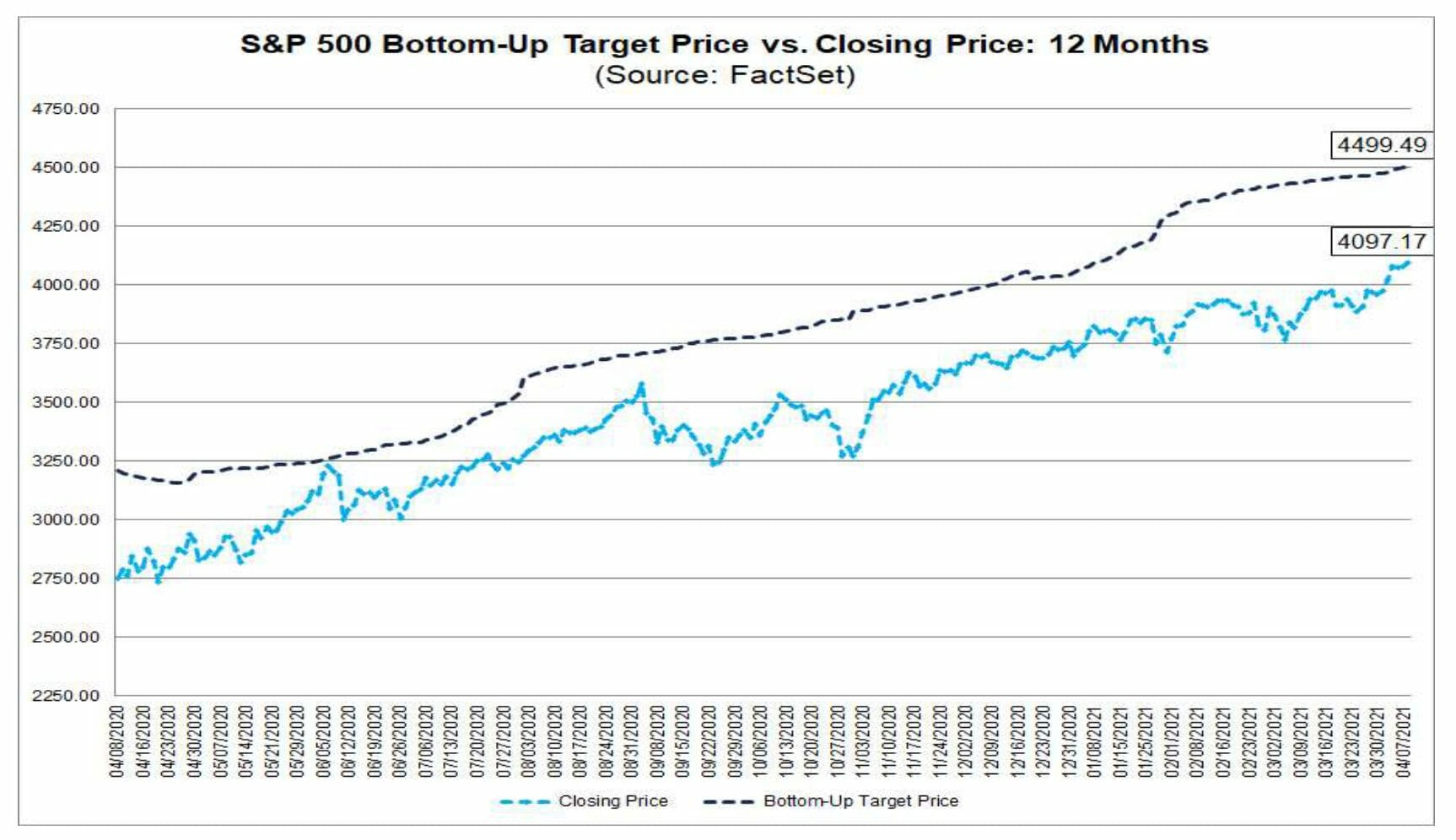 Better-than-expected corporate report cards have helped fuel the post-election stock market rally. During the past three quarters (Q2 2020 through Q4 2020), actual EPS reported by S&P 500 companies have exceeded projected EPS on average by 19%.

That said, if you’re looking for a way to stay bullish and at the same time minimize risk, you should keep an eye out for an exciting offer from Investing Daily. It’s the unveiling of a new premium trading service under the aegis of our colleague Robert Rapier. Watch for details, soon.