The Ministry of Silly Stocks

I admire the surrealistic satire of the British comedy troupe Monty Python. There seems to be a Python analogy for every occasion.

“The Ministry of Silly Walks” is a famous Python sketch involving John Cleese as a bowler-hatted civil servant in a fictitious British ministry who applies government grants to develop eccentric ways of walking.

First, let’s get our acronyms straight. A SPAC is essentially a shell company created strictly to raise capital through an IPO for the purpose of acquiring an existing company. Subsequently, an operating company can merge with or be acquired by the publicly traded SPAC and become a listed company without going through the regulatory rigors of its own IPO.

An NFT is a form of cryptocurrency that uses blockchain technology to represent a digital image. Many NFTs are one-of-a-kind or limited and they’re selling for millions of dollars. Meanwhile, social media chatter still whipsaws certain stocks, such as video game retailer GameStop (NYSE: GME).

Wednesday was a watershed for cryptocurrency fans as Coinbase (NSDQ: COIN) made its NASDAQ debut. Coinbase is an American cryptocurrency exchange platform that operates remotely without an official physical headquarters. (For further details about Coinbase, visit this page.)

Coinbase closed its first day of trading with a share price of $328, which represented a 31% gain from the $250 reference price set by NASDAQ. By Wednesday evening, the newly public company had reached a valuation of more than $85 billion.

Will Coinbase turn out to be a silly stock that crashes and burns, or a lasting vehicle for the mainstreaming of crypto? Too soon to say. But for now, the stock’s debut has made scores of people instantly rich (on paper). Coinbase CEO Brian Armstrong’s 40 million shares became worth $16 billion.

Through it all, the stock market continues to break records.

The granddaddy of all cryptocurrencies, Bitcoin (BTC), spiked nearly 2% on Thursday to close at $63,637.316 per token, as tailwinds from the Coinbase IPO continued to lift the cryptocurrency segment. In pre-market futures contracts Friday, stock were cooling off and trading mixed.

The economy walks the walk…

According to FactSet, the S&P 500 is expected to report year over-year earnings growth of 24.5% for the first quarter, the highest growth rate in 10 years. As they emerge from pandemic lockdowns, companies are not only more profitable but also leaner and more efficient. The estimated net profit margin for the S&P 500 for Q1 2021 is 10.9%, which is above the five-year average of 10.5% and above the year-ago net profit margin of 9.4%.

The U.S. Commerce Department reported Thursday that retail sales jumped 9.8% in March, versus the consensus estimate of a 6.1% gain and a decline of 2.7% in February (see chart). 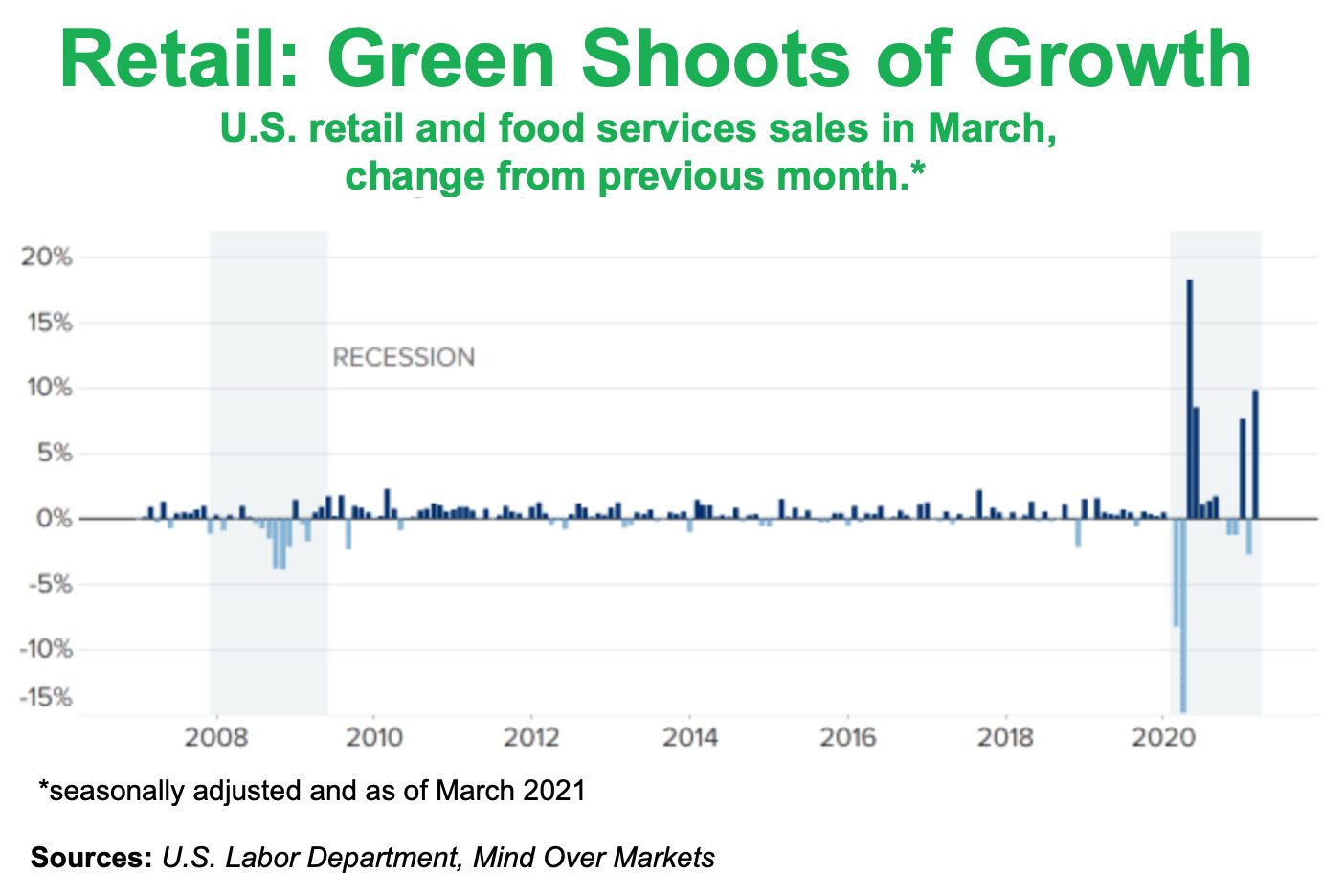 A separate Labor Department report on Thursday showed first-time filings for unemployment insurance plunged, with 576,000 new jobless claims for the week ended April 10. That was by far the lowest total since the early days of the pandemic and a dramatic decline from the previous week’s total of 769,000.

Global growth is picking up as well. China reported Friday that its gross domestic product surged 18.3% in the first quarter versus the same quarter last year, a record rate of growth.

After a faltering start in the early days of the outbreak, China was the first country to contain the coronavirus pandemic and its public health efforts are bearing fruit. In addition to China, other economies in Asia and Europe are showing renewed vigor.

Despite some of the stock market’s silliness, the economic fundamentals in the U.S. and around the world remain sound.

Editor’s Note: As I’ve just explained, I’m optimistic about the stock market this year. That said, you need to be wary of investor excesses that could trigger temporary market swoons.

If you’re looking for a way to stay bullish and at the same time minimize risk, consider a new trading service from our colleague Robert Rapier. It’s called Rapier’s Income Accelerator and it’s your way to steadily boost income, regardless of the ups and downs of the broader market.

Forget GameStop. Forget Coinbase, Bitcoin, NFTs, and SPACs. Robert has devised a safe way to generate cash on demand, without touching dangerous assets that can devastate your portfolio. Click here for details.