Welcome to my video presentation for Monday, April 19, 2021. For greater details, read my article below.

Consumer spending accounts for about 70% of U.S. gross domestic product (GDP), so much rides on the shoulders of the shopper. As wallets reopen, the spring season is bestowing economic rebirth. Amid the backdrop of a reinvigorated American shopper, stocks surged last week to close at record highs (see table). 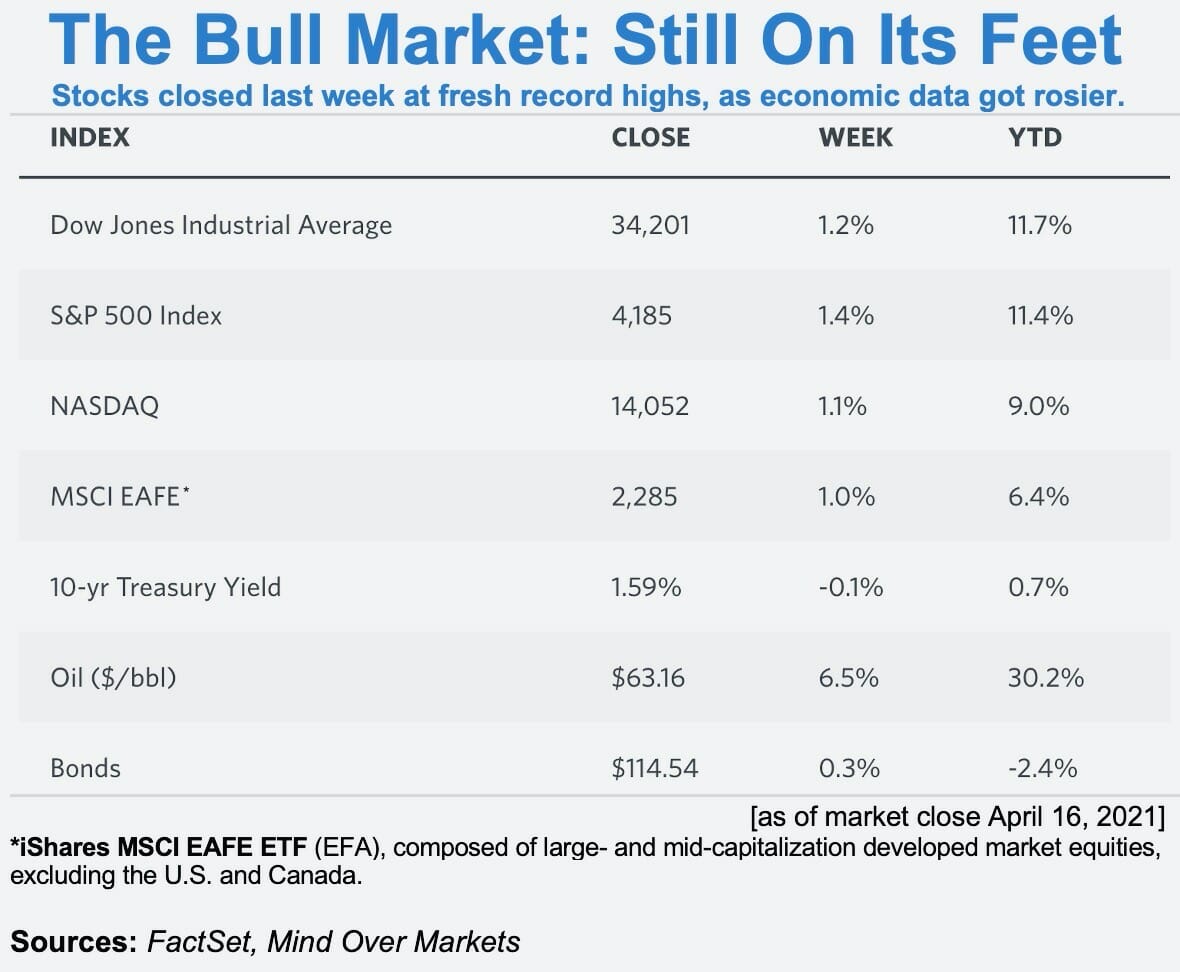 The U.S. Commerce Department reported Thursday that retail sales jumped 9.8% in March, versus the consensus estimate of a 6.1% gain and a decline of 2.7% in February.

After a weak holiday season, U.S. consumer spending roared back in January 2021, when retail sales spiked 7.7% from the December total on a seasonally adjusted basis. Following a temporary retreat in February, consumer spending snapped back in March, climbing to $619 billion, as consumers eagerly spent their $1,400 stimulus checks.

The latest spending spree pushes total retail sales for January through March to 14.3% above the same year-ago period (see chart). 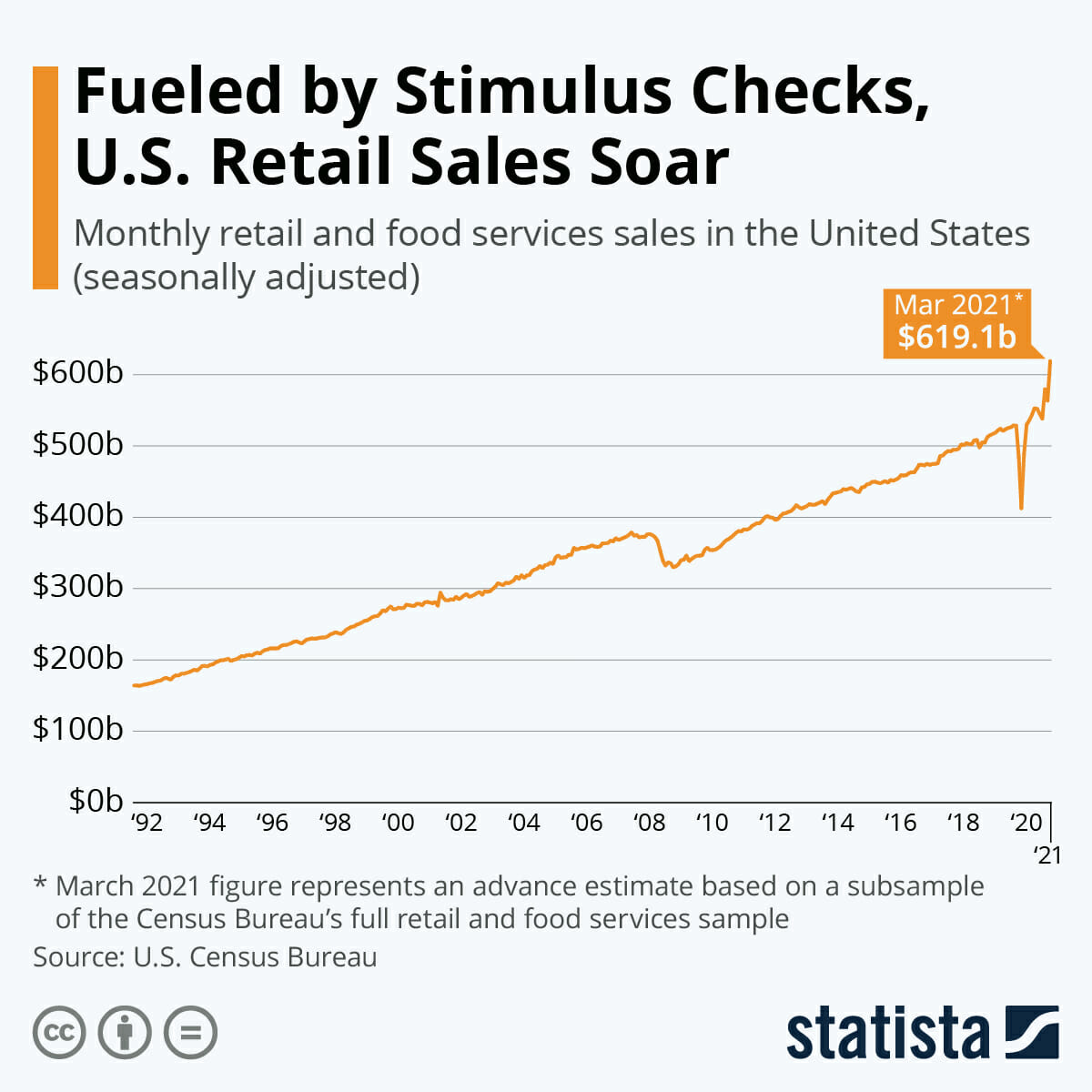 The retail sales increase in March was broad-based and included big ticket items such as cars. Analysts expect the pace of shopping to accelerate as the year progresses and more people get vaccinated.

The Conference Board recently reported that its Consumer Confidence Index surged in March to post its largest one-month gain in nearly a decade, driven by jobs growth, higher income, and expectations that vaccines would soon vanquish the coronavirus.

Consumers are even confident enough to board airplanes. The major U.S.-based airlines, which had been brutally battered by the pandemic, are bounding back with a strength that’s surprising analysts. Notably, American Airlines (NSDQ: AAL) announced last week that it expected to sell 90% of the number of tickets this summer in the U.S. than it did in the summer of 2019.

Equities in the retail sector have been on a tear and face further appreciation. The smartest retail investment bets now are big box chains that have successfully adopted e-commerce best practices. The following chart depicts the increasing share of e-commerce in global retail sales. 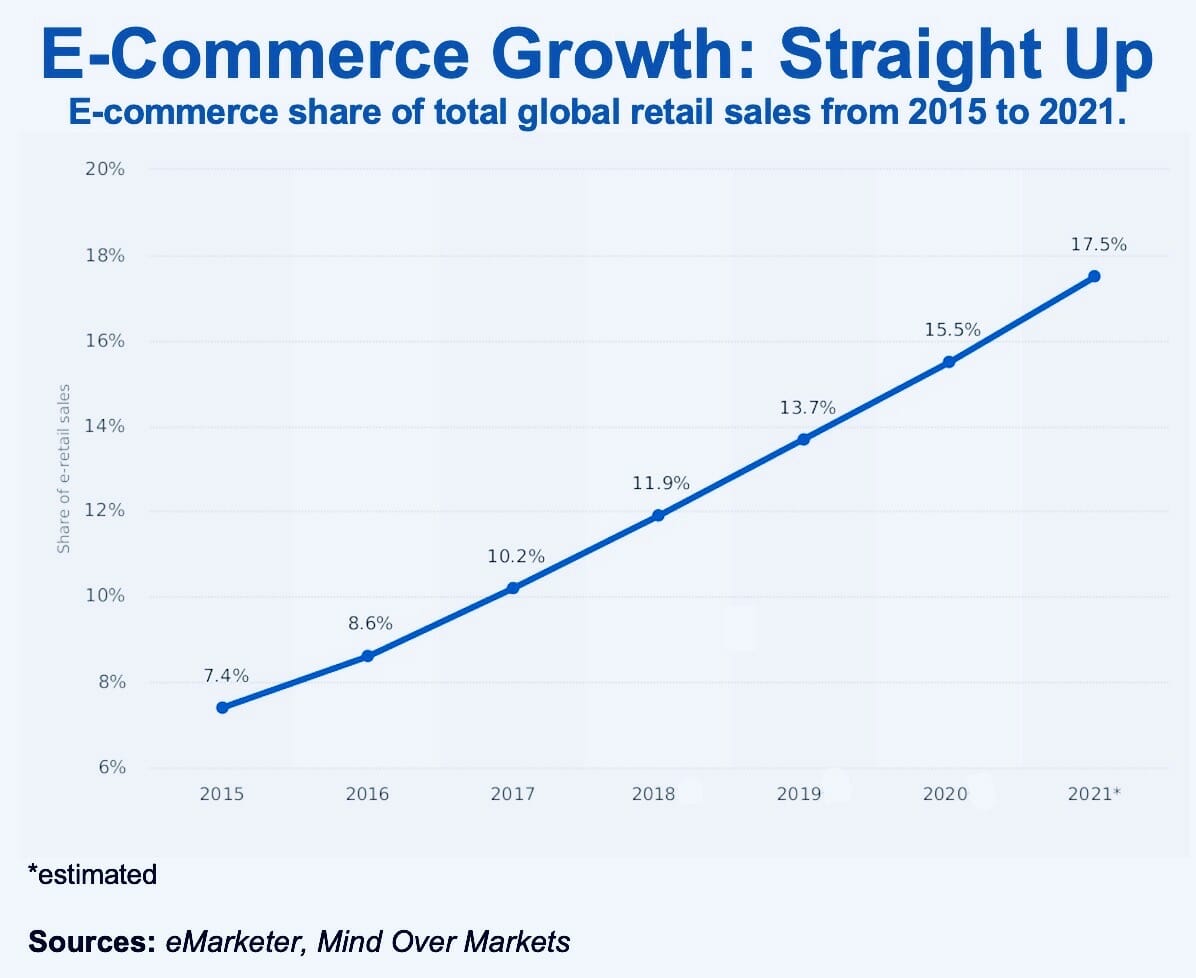 Economists currently expect U.S. GDP to grow between 7% and 8% in 2021, which would represent the strongest full-year growth rate since the 1950s.

The Organisation for Economic Co-operation and Development predicts that global GDP will grow by 5.6% in 2021 compared to the previous year. Meanwhile, corporate earnings are posting double-digit year-over-year increases.

And yet, despite the quickening growth, inflation remains tame. We could be experiencing the much-coveted phenomenon of a “Goldilocks” economy, whereby growth isn’t too hot nor too cold.

The U.S. Bureau of Labor Statistics reported on April 13 that the Consumer Price Index (CPI) for all urban consumers increased 0.6% percent in March on a seasonally adjusted basis, after rising 0.4% in February.

Read This Story: Inflation, The Next Big Villain?

Inflation is indeed picking up, but the rise remains modest by historical standards. Despite the braying of the fear-mongers, I don’t envision a return to the sort of hyper-inflation we saw in the 1970s (see chart). 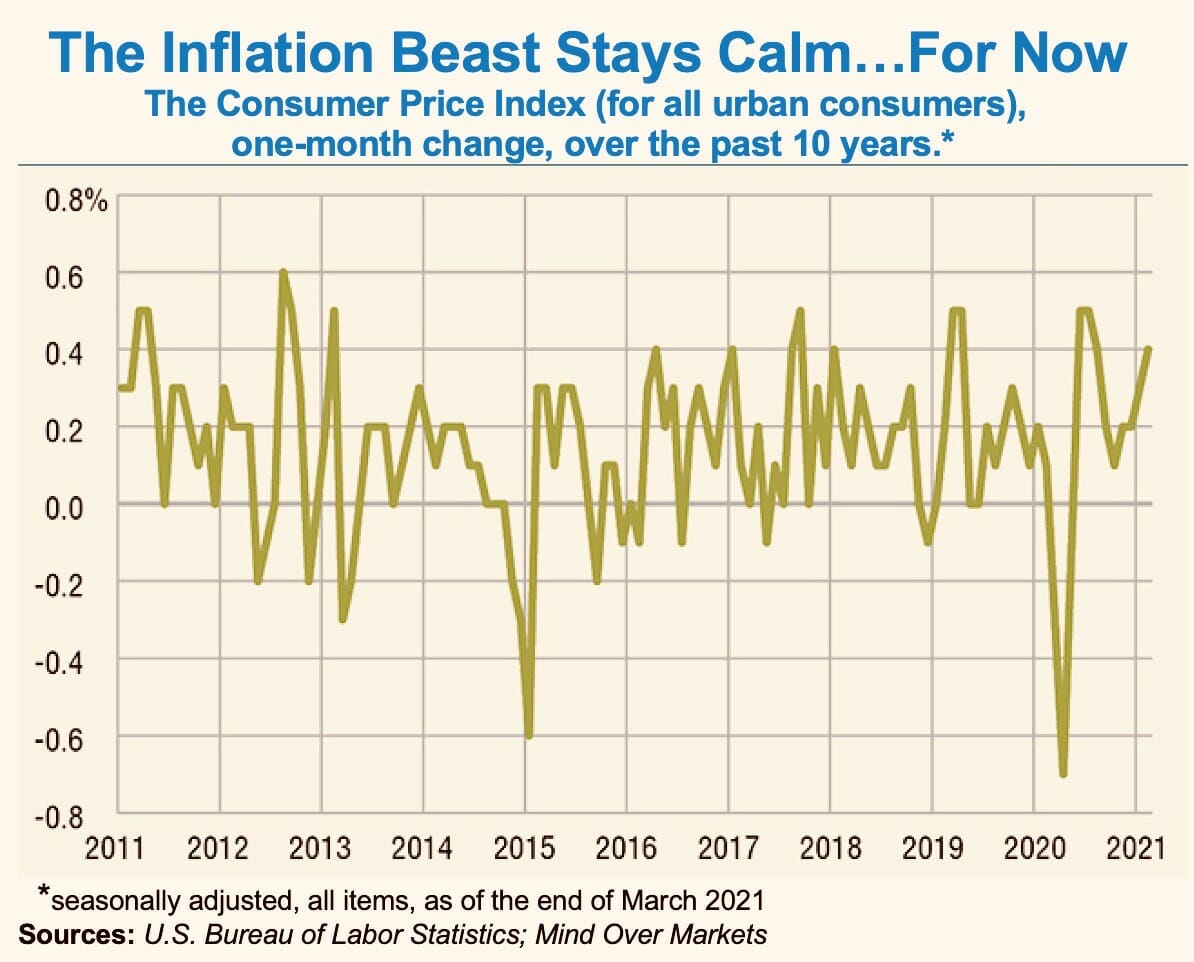 The CPI for all items less food and energy rose 0.3% in March. The analyst consensus is that CPI inflation will hover within the range of 1.6% to 2.8% in 2021 and average about 2% in 2022. The Federal Reserve has targeted a long-term inflation rate of 2% and vows not to raise interest rates if we witness a brief burst of inflation. This Goldilocks environment has made a chump out of the bears.

Editor’s Note: If you’re looking for a way to stay bullish and at the same time minimize risk, you should keep an eye out for an exciting offer from Investing Daily. It’s “the next big thing” from our colleague Robert Rapier: a new trading service called Rapier’s Income Accelerator.

Up, down, sideways… even in the face of rising interest rates… tech selloffs… and anything else Mr. Market throws at you, Robert’s trades are income-generating machines.

Robert has devised a new, safe way to generate cash on demand, without touching toxic assets that can wipe out your nest egg in the blink of an eye. Click here now for details.