A Smarter Bet on Infrastructure

A few weeks ago, I named infrastructure stocks “The Best Sector Bet This Year.” President Biden had just introduced a $2 trillion proposal that included a wide range of spending initiatives.

Republicans have counter-proposed an $800 billion spending plan that is narrower in scope. It’s too soon to tell how those negotiations will turn out. However, it is probably safe to assume that some sort of spending bill will eventually be approved this year.

In that article, I used the iShares Global Infrastructure ETF (IGF) as an example of one way to play this sector. Specifically, I suggested buying a call option on IGF that expires on July 16 at the $45 strike price. At that time, that option could be bought for $2.

You can still execute that trade if you like. Although IGF appreciated 3% over the first half of this month, the price of the call option has remained flat.

That surprises me. Those ratios would make sense if the option will be expiring in less than a month. At that point, there isn’t much time remaining for the stock to appreciate.

At the end of this week, there will still be 12 weeks to go until this option expires. That is plenty of time for IGF to surge if a major infrastructure spending bill is passed by then.

It occurred to me that IGF may be suffering due to its global portfolio. Most of its top holdings are domiciled overseas. Some of them would benefit from the Biden plan. Many of them may not see any of that money.

For that reason, I believe the Global X U.S. Infrastructure Development ETF (PAVE) may be a better way to play the Biden spending plan. According to the fund sponsor, this ETF “seeks to invest in companies that stand to benefit from a potential increase in infrastructure activity in the United States.”

Among its 10 largest holdings, eight of them are domiciled in the U.S. The other two are former U.S. companies that are now based in Ireland for tax purposes.

It’s no accident the fund was founded in March 2017. That’s when then-President Trump first announced his intention to spend heavily on infrastructure. That didn’t happen. Nor did it happen one year later when Trump took another run at an infrastructure proposal. There wasn’t enough political will on either side of the aisle to get a deal done. Unemployment was low and the economy growing.

All that changed last year when the coronavirus pandemic all but shut down the global economy. Unemployment soared while economic productivity nosedived.

Now, there’s a lot more motivation in Congress to pass an infrastructure spending bill. What’s more, the infrastructure-friendly Democrats control the White House and both chambers of Congress.

Rising to the Occasion

It appears that the stock market has been anticipating a major infrastructure spending plan ever since COVID-19 upset the economy. Over the past 12 months, PAVE has more than doubled in value while IGF is up less than a third of that amount. 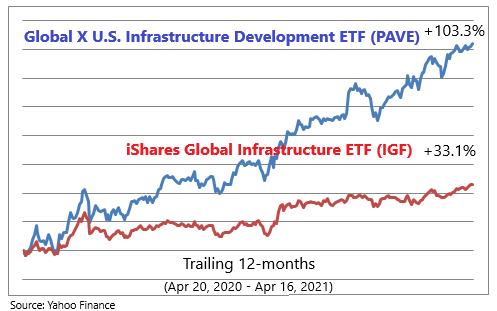 That suggests that the expected near-term benefit of the Biden Plan is already reflected in its share price. If so, selling a covered call option may be the better way to go this time.

It works like this. For every 100 shares of PAVE that you own, you can sell to someone else the right to buy your shares at a set price within a specified period of time.

For example, a few days ago while PAVE was trading at $25.50, the option that expires on June 18 at the $26 strike price could be sold for 90 cents. That equates to an options premium yield of 3.5%. For that stock to get called away from you, PAVE would have to appreciate 2%.

Combined, the share price appreciation and options premium adds up to a return of 5.5% over the next eight weeks. On an annualized basis, that works out to a gain of 35%.

If you think that sounds too good to be true, think again. My colleague, Robert Rapier, just issued a new trade alert this week with an annualized gain potential of 40%. In fact, the first six trades for his new service, Rapier’s Income Accelerator, have an average annualized profit if called of 38.8%.

Want to tap those kinds of gains? You should consider Rapier’s Income Accelerator. As I write this, his trading methodology is pumping cash into the portfolios of his followers. Click here now for details.