Welcome to my video presentation for Monday, April 26, 2021. My article below provides greater details.

Fear and greed animate all markets, causing stocks to be either overvalued or undervalued. Even during this long bull run, you can find opportunities to buy stocks below intrinsic value, and to sell when they’re at or above that level.

I typically don’t look for relative value (i.e., against other stocks in the same sector) but instead focus on absolute value.

In the stock market, today’s laggards can be tomorrow’s winners. We’re currently in the midst of a market rotation, whereby value stocks are outpacing growth stocks. 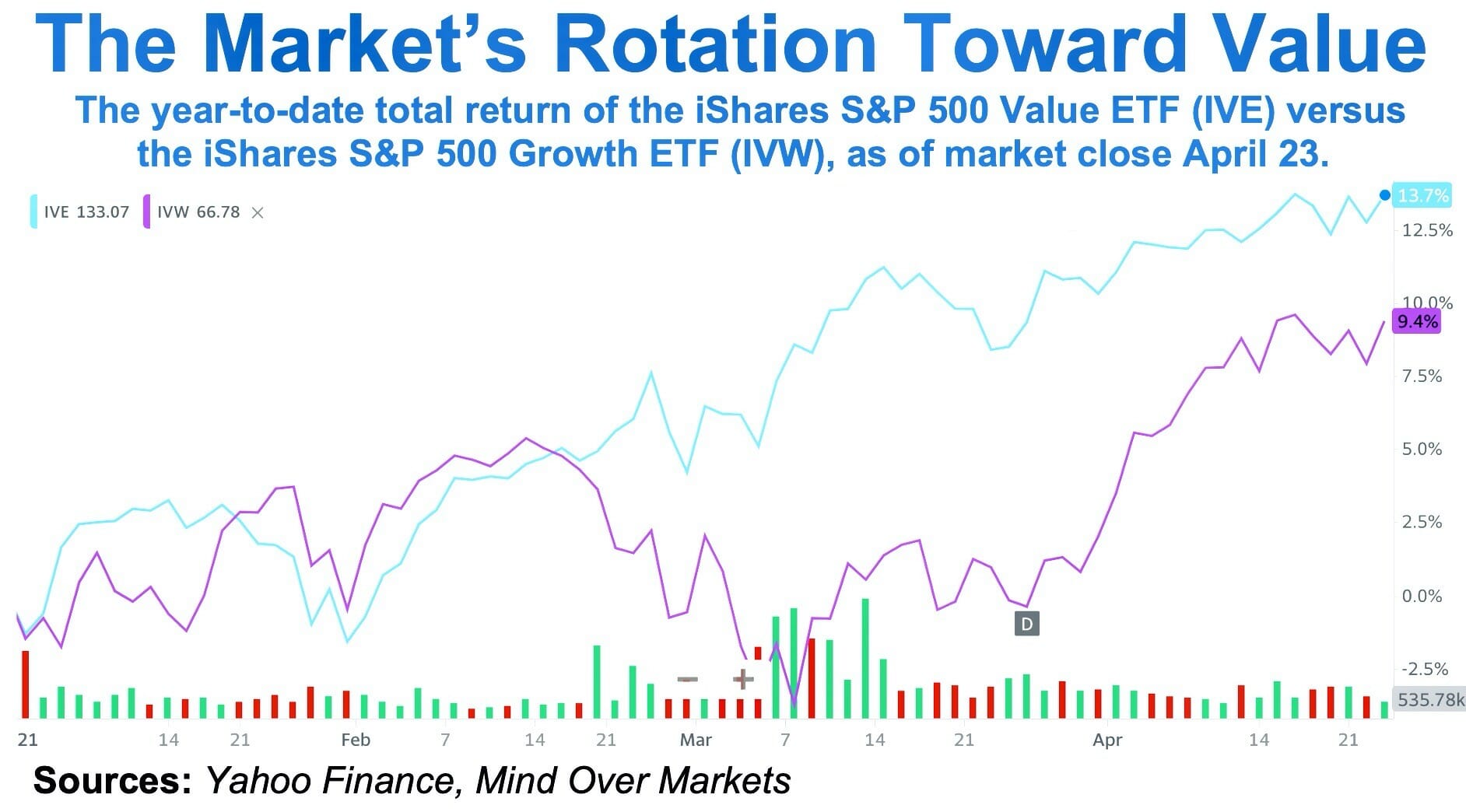 Value should continue beating growth this year. I consider myself a traditional value investor and also a contrarian. I’m always seeking out negative news. When others move out of an intrinsically sound stock because of a short-term hiccup, I consider that a buying opportunity and relish this type of bad-news induced volatility. You should, too.

We saw a quick news-triggered decline last Thursday, when President Biden announced that he would seek new taxes on the wealthy, including a near doubling of the capital gains tax for people earning more than $1 million a year. The revenue would pay for the next phase in his $4 trillion plan to retool the U.S. economy.

Biden also said he would propose boosting the top marginal income tax rate to 39.6% from 37%, the level to which it was cut by President Trump’s tax overhaul in 2017. The proposals make good on Biden’s campaign promises to raise taxes on the rich but not on households earning less than $400,000. The president will unveil the full proposal, dubbed the American Family Plan, this week.

When news of the proposed tax hikes broke, stocks immediately tanked. But the next day on Friday, investors shrugged off the prospective tax hikes and the market sharply rebounded. Nonetheless, stocks ended the week lower due to lingering coronavirus fears (see table). 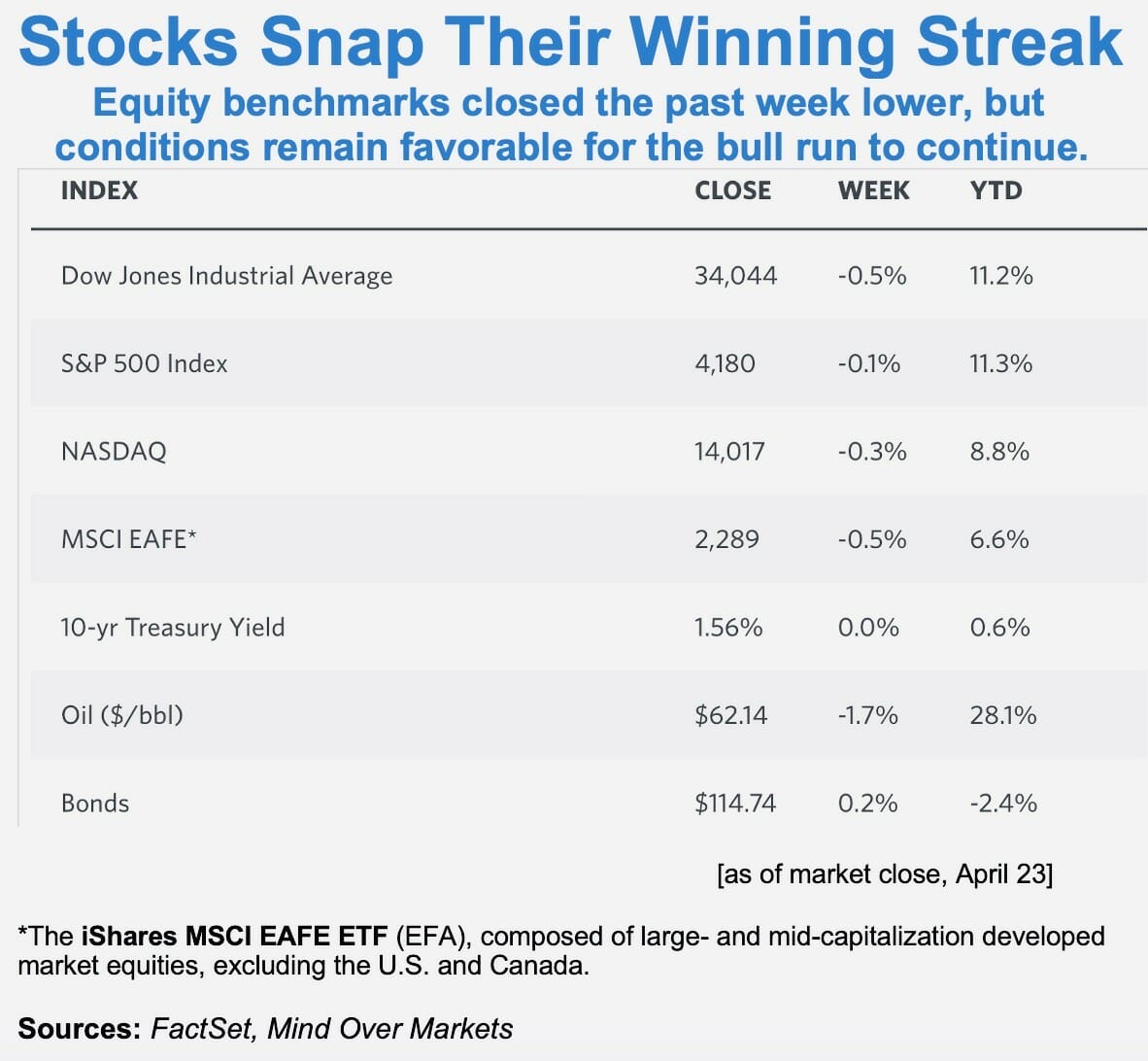 The table shows that oil prices have made a substantial comeback year to date, on rising hopes for economic growth. For most energy companies to produce oil profitably, crude needs to trade at around $50 per barrel. Current oil prices of about $62/bbl are a far cry from the negative price of -$37.63/bbl on April 20, 2020.

International equities have been rising this year along with U.S. benchmarks, reflecting the implementation from overseas central banks of aggressive stimulus measures. Also lifting overseas equities have been better-than-expected manufacturing data from Europe and Asia, particularly China.

In the U.S., unemployment continues to fall, a trend that’s helping sustain the stock market rally. The Labor Department reported last Thursday that first-time claims for unemployment insurance totaled 547,000 for the week ending April 17, below the 603,000 consensus estimate. The total represented a low since the coronavirus outbreak in the U.S. (see chart). 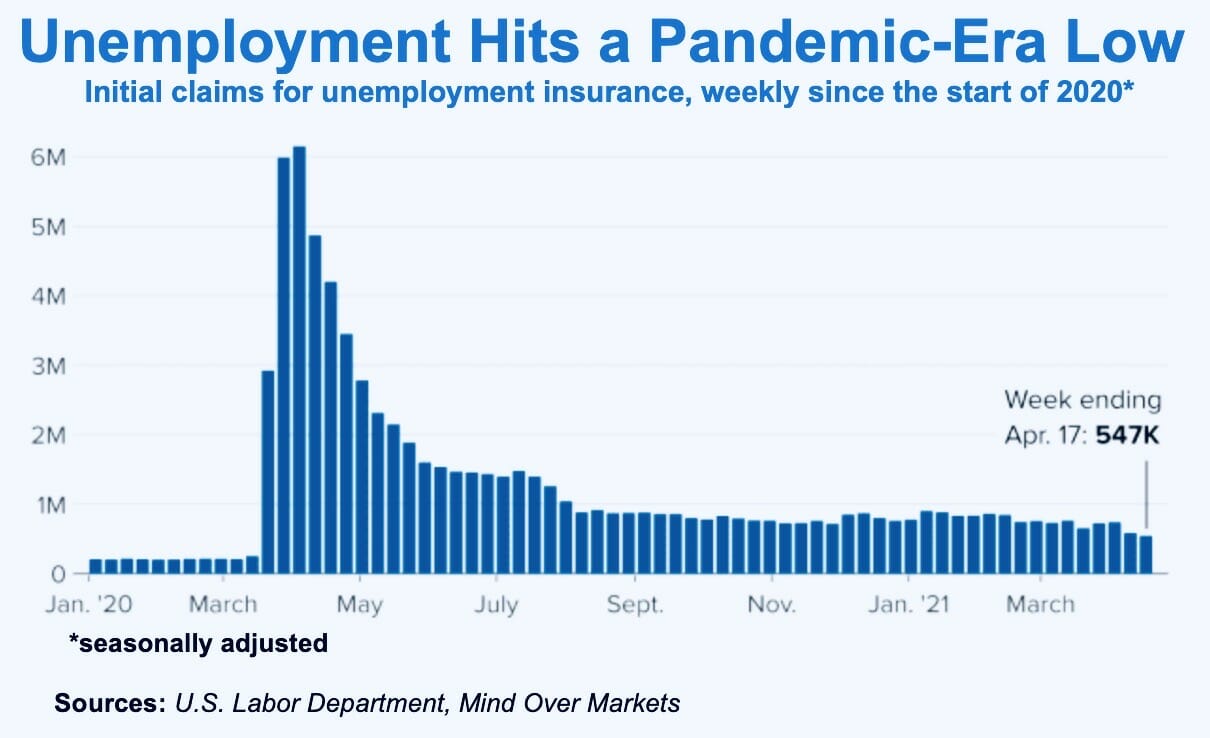 The brightening jobs picture in the U.S. is manna for the financial services sector, which had gotten clobbered during the pandemic but is now bouncing back.

Read This Story: As The Economy Recovers, Banks Shine Through

For context, jobless claims reached a jaw-dropping 6.2 million in early April 2020 in the initial days of the pandemic-induced economic shutdown. As consumers and businesses get stronger this year, bank stocks represent an appealing value proposition.

The confluence of these factors point to an economic and stock market boom in 2021, even if taxes are increased. Sure, Wall Street hates higher taxes. Most of us do. However, as Friday’s stock market rebound indicates, the financial community is giving greater credence to Biden’s proposed infrastructure spending. Don’t overreact to short-term headlines; keep your eye on long-term stimulus.

In the meantime, if you want to stay bullish but at the same time lower risks, consider Rapier’s Income Accelerator. It’s a new trading service run by my colleague Robert Rapier.