Tesla’s Day of Reckoning has Arrived

The good news didn’t stop there. Tesla delivered 184,800 new cars during the quarter. That is more than double the number of new vehicle deliveries during the same period last year. The company also widened the gross margin on its automotive division by 95 basis points.

You might think news that good would send Tesla’s share price higher. After all, TSLA soared more than 700% last year on results considerably worse than that. As I noted three months ago, Tesla CEO Elon Musk “is the man that can do no wrong in a stock market that will only go up.”

That is no longer the case. Since peaking at $900 on January 25, TSLA is down 20%. Over the same span, the NASDAQ Composite Index is up nearly 4%. It appears that King Midas may have finally lost his golden touch. 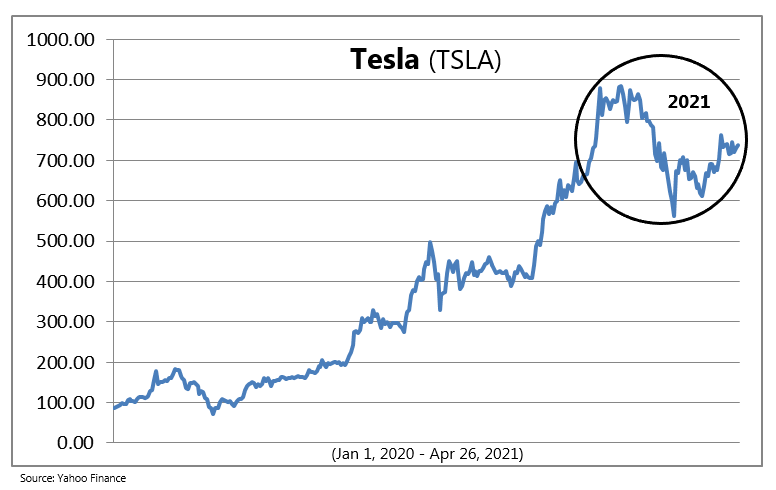 Betting against Elon Musk thus far has proven to be a losing proposition. Perhaps more so than any other stock, Tesla has been a short seller’s nightmare. Just when you think TSLA has become grossly overvalued and ripe for a correction, it usually does just the opposite.

This time, it may not be as easy for Tesla to escape the hangman’s noose. Despite its recent fall, the stock is still valued at roughly 170 times forward earnings and 25 times sales.

Those metrics would be okay for a small-cap stock with huge upside potential. However, with a market cap of nearly $700 billion Tesla is now the seventh most valuable company in the S&P 500 Index.

As for Tesla’s upside potential, that depends on how much market share you believe the company will capture as the EV market grows. There is no argument that the EV market is on the verge of a massive expansion.

Over the next six years, EV sales are projected to grow at a compound annual growth rate (CAGR) of 45%. By 2027, global demand for EVs is estimated to exceed $1 trillion.

The problem for Tesla is that it now has a lot of competition. Last month, Volkswagen (OTC: VWAGY) announced its intention to deliver more EVs in 2025 than Tesla. Late last year, General Motors (NYSE: GM) said that it will launch no fewer than 30 new EV models by the same year.

Suddenly, the EV market is getting crowded. Every major automobile manufacturer in the world is getting into the game. The trillion-dollar question is, which ones will end up with the biggest market share?

Tesla’s biggest asset, Elon Musk, is also its biggest liability. Musk is notoriously unpredictable, with a penchant for overpromising and underdelivering.

He could get away with it while the EV market was in its nascent stages and competition was scarce. But now he, and the business he created, is being held to a higher standard.

Perhaps the best thing Elon Musk can do is step away from the company. At this point, what Tesla needs most is a CEO who is focused on execution more than vision.

Read This Story: The Ministry of Silly Stocks

That’s what Amazon.com (NSDQ: AMZN) founder and CEO Jeff Bezos just did. Three months ago, Bezos announced that he will step down as the company’s CEO later this year.

Musk’s attention is diverted by his equally strong interests in SpaceX and The Boring Company. For Musk, the idea of sending a man to Mars and building underground travel tubes are too irresistible to ignore.

We may get a sneak preview of Musk’s future plans when he hosts Saturday Night Live on May 8. Who knows, he may announce during his opening monologue that he will spend the rest of his life on a mountaintop in Tibet.

But regardless of what Musk says he will do, the only thing that matters is what actually happens. There will be no more free passes for Musk to smoke pot on air or troll federal regulators on social media.

What Tesla needs now is mature leadership in the face of rapidly growing competition. Based on the stock market’s reaction to Tesla’s first-quarter results, it appears that Elon Musk may not be that person.

Editor’s Note: Our colleague Jim Pearce just provided you with invaluable investing insights. But his article only scratches the surface of our expertise. You also should consider Robert Rapier, chief investment strategist of Rapier’s Income Accelerator.

Regardless of bull or bear markets, Robert Rapier’s trades are income-generating machines. With Rapier’s Income Accelerator, Robert shows you how to generate cash on demand. Click here now for details.