A few days ago, I discussed the danger of relying on stock market appreciation as your primary source of income in retirement. As I noted then, a major stock market correction could put you at risk of running out of money.

Another financial risk in retirement is spiraling expenses. And I’m not just talking about the cost of health care, which is constantly going up.

A recent CNBC article pointed out that the 1.3% cost-of-living adjustment (COLA) made to Social Security payments this year falls woefully short of what most retirees are actually experiencing.

The article noted that the fastest-growing retiree cost over the past year was car and truck rentals, up 31.2%. Fortunately, that is a cost that most retirees can avoid if necessary.

However, the cost of many food items including beef, pork, and citrus fruits climbed roughly 10% over the past 12 months. Although each of those items could be replaced by something cheaper, the overall jump in grocery prices can’t be avoided altogether.

Another rising cost that could hit retirees hard in the pocketbook is lumber. In California, the average cost of a new home increased by more than $24,000 over the past year due primarily to skyrocketing timber prices.

Buying a recreational vehicle (RV) instead of a house in retirement may avoid rising timber costs. But surging demand for RVs combined with higher fuel prices has makes that a more expensive option, too.

The point being, retirees need to think hard about how to manage expenses in retirement to avoid rising inflation. The reality is that the cost of living for many retirees is going up far faster than the COLA adjustment would suggest.

In the three years of 2009, 2010, and 2015, there was no COLA increase at all. Over the past six years, the total COLA adjustments to Social Security benefits amounted to just 8%. 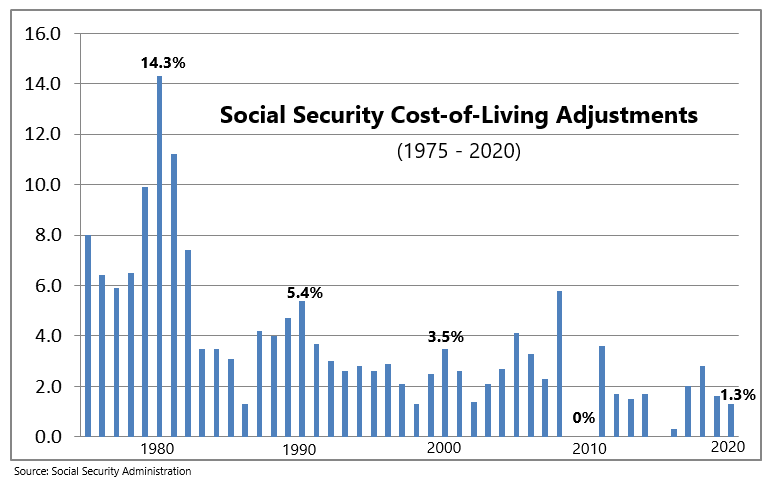 That’s a scary number if you are about to retire and have limited funds to invest. As a former financial planner who is only a few years away from retirement age, I feel your angst.

There isn’t much you can do to control your health care costs other than doing whatever you can to remain in good health. But there are some things you can do to limit your risk exposure to the other major expense item.

For many retirees, the cost of housing is their single biggest liability. Back in my financial planning days, I was surprised by the number of clients who intended to buy a new home in retirement with a sizable mortgage.

If you are a current homeowner, I advocate using the equity in that property to pay cash for your next home in retirement. That may necessitate going down in size and away from major employment hubs, where housing costs are higher.

If that is not an option, renting may be the better way to go. In that case, the monthly rent should not exceed one-third of your household income.

At the start of this year, the average Social Security benefit was $1,542 per month. That’s not a lot for one person, but for a two-person household that should be sufficient to lease a decent property in most localities.

If those numbers won’t work for you, generating more investment income in retirement may be the only solution. In that case, it is critical that you do so in a manner that does not expose you to the risk of being wiped out by the next “black swan” event.

For that reason, it is critical that you fully evaluate both the upside and downside potential of an investment strategy. Fortunately, I know of a system that delivers consistently high returns in every type of market environment. Devised by my colleague Robert Rapier, it’s immune to rising inflation and any other risks that Mr. Market can throw your way.