I stumbled across a movie last weekend called The Formula (1980), starring Marlon Brando as a murderous oil company tycoon who’s trying to hide from the world a long-lost Nazi recipe for synthetic oil. This mediocre melodrama reminded me that “Big Oil” executives are usually portrayed as villains in the movies.

But lately, it’s not just Hollywood. Wall Street also has developed a dubious view of oil companies, at least from an investment standpoint.

Symbolic of this attitudinal change came in August 2020, when the Dow Jones Industrial Average replaced oil super major Exxon Mobil (NYSE: XOM) with cloud services provider Salesforce (NYSE: CRM). Removal from the 30-stock Dow was a humbling moment not just for Exxon Mobil but for the entire oil industry.

Big Oil is running out of friends in Washington, too. In his address to a joint session of Congress on Wednesday night, President Biden emphasized his administration’s efforts to combat climate change and transition the nation away from fossil fuels and toward clean energy. The sun appears to be setting on the fossil fuel industry.

And yet, the globe’s biggest exploration and production companies are on track this week to start reporting impressive year-over-year earnings growth for the first quarter of 2021. Energy stocks have been surging. Will it be enough, though, to win back investors over the long haul?

To be sure, fossil fuels will remain the world’s principle energy source for years to come. But trends indicate they’ll continue to lose market share to renewable energy.

Back from the dead…

The coronavirus pandemic clobbered oil and gas prices, weighing on the profits and stocks of energy companies. Energy demand imploded and the price per barrel of West Texas Intermediate (WTI) actually dipped into negative territory in April 2020. Dividend paying stalwarts were forced to cut payouts and debt burdens ballooned.

But this week, the super majors as a whole are projected to report higher revenues, profits and cash flows for Q1 2021, due to the rebounding global economy and higher energy demand. The following chart shows the remarkable resurgence in crude oil prices, year to date: 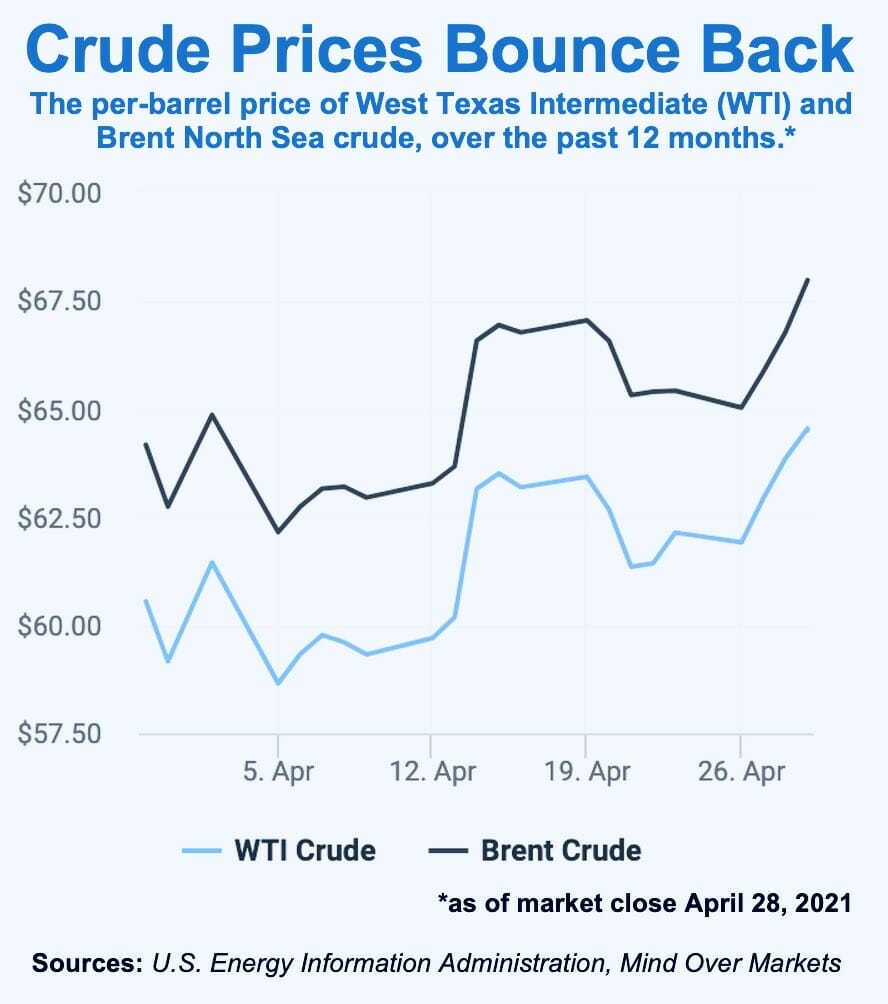 Energy stocks have gone from laggards to leaders. They were the worst performing sector in 2020 and so far this year they’re out in front.

However, many investors remain skeptical about the future fortunes of the energy patch. The focus remains on technology, now and into the post-COVID world.

Energy stocks are in the ascendancy this year, but keep in mind, they fell pretty hard during the nadir of the coronavirus pandemic in 2020. Overall, the outbreak shattered confidence in the long-term growth prospects of the fossil fuel industry. The world is still dependent on fossil fuels, but Wall Street no longer views Big Oil as a particularly appealing investment proposition.

We’ve reached a tipping point whereby renewables and work-at-home technologies are enjoying an upward trajectory at the expense of fossil fuels. The pandemic has accelerated this trend.

Biden’s plan is assured of eventual passage in the Democratic-controlled House and stands a good chance in the 50-50 Senate, where Democrats have indicated they’ll get it passed through a legislative process known as reconciliation if the bill lacks sufficient GOP support to overcome a filibuster.

Pandemic-induced damage last year to the energy patch underscored the inherent volatility and vulnerability of the industry. The energy giants booked massive quarterly losses, laid off tens of thousands of workers, and cut their dividends. Energy super major Royal Dutch Shell (NYSE: RDS.A, RDS.B) cut its dividend for the first time since 1945, slashing its payout by two-thirds. A wave of bankruptcies washed over the energy sector.

The quickening adoption of energy technologies that reduce carbon output is a challenge to the oil giants, which have been slow to get on the green bandwagon. Despite a strong first quarter, regaining investor confidence in Big Oil on a lasting basis will be a tough sell.

In the meantime, if you want to stay bullish but at the same time lower risks, consider Rapier’s Income Accelerator. It’s a new trading service run by Robert Rapier.

I closely work with Robert on his other service, Utility Forecaster, so I know firsthand that Robert’s trades are income-generating machines. They make money regardless of changing government policies, economic ups-and-downs, or pandemic uncertainties.

As chief investment strategist of Rapier’s Income Accelerator, Robert has devised a new, safe way to quickly generate cash on demand, without touching toxic assets that can wipe out your nest egg. Click here for details.