I have liberal friends who dumped stocks after Donald Trump got elected in 2016. Similarly, many of my conservative friends dumped stocks after Joe Biden won in 2020. Bad investment decisions, both times. After each election, stocks went on a prolonged tear.

Repeat after me: Never make investment moves based on your electoral preferences.

Stocks have continued to rally since the November 2020 election and they hover at record highs. Of course, to justify further significant stock price appreciation this year, we’ll need to see strong corporate earnings growth. Looks like we’ll get it.

The forward 12-month price-to-earnings (P/E) ratio is 22.3, above the five-year average of 17.9 but not wildly in front of projected earnings growth.

The economy is humming along, too. The Commerce Department reported Thursday that U.S. gross domestic product (GDP) grew in Q1 at a robust year-over-year rate of 6.4%, fueled by consumer spending. Estimates are that Q2 will be even better. For CY 2021, analysts expect GDP to expand by nearly 7%, which would represent the fastest CY growth since President Reagan’s “morning-in-America” year of 1984.

Q1 2021 corporate earnings so far are generally exceeding expectations, providing a tailwind for equities. On Thursday, the three main U.S. stock market indices soared: the Dow Jones Industrial Average by 239.98 points (+0.71%), the S&P 500 by 28.29 points (+0.68%), and the tech-heavy NASDAQ by 31.52 points (+0.22%). The S&P 500 hit a new record. In pre-market futures contracts Friday, the three indices were trading lower as investors worried about an uptick in COVID-19 cases around the world.

The spotlight this week is on blockbuster earnings from Big Tech, especially bellwether stock Apple (NSDQ: AAPL). The Cupertino giant has been on a roll (see chart). 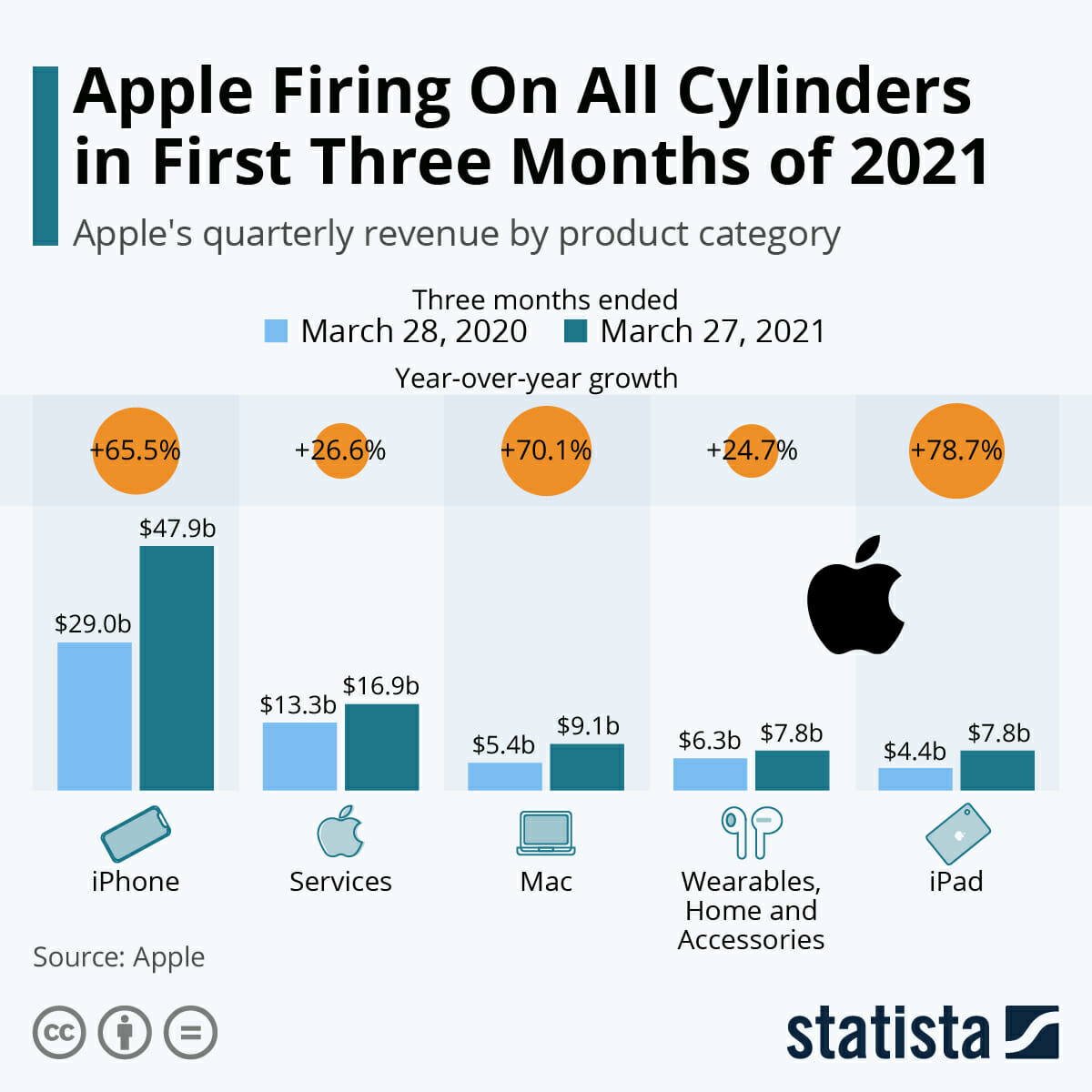 Many earnings beats have been accompanied by optimistic commentary and guidance. The market’s rise also has been showing greater breadth, as smaller stocks in industries other than technology join the rally.

I’ve written extensively about how the FAANG stocks have been supporting the overall market. As a market weighted index, the S&P 500 places greater weight on larger stocks. This method generates a winner’s bias because stocks that are climbing witness a concomitant rise in their market caps. In turn, these rising stocks wield greater influence on the S&P 500’s performance.

However, as the economic recovery gains traction, a more diverse variety of equities have risen as well. Year to date, the small-cap Russell 2000 has gained 16.3% compared to 11.4% for the S&P 500 (as of market close April 29). That’s a sign that the rally has legs.

To be sure, quickening growth has been fueling inflation fears. The U.S. consumer price index (CPI) rose 2.6% year-over-year in March, versus a 1.7% year-over-year increase in February. That represents the highest month-over-month increase (2.6% vs. 1.7%) in the CPI since 2009. Higher producer prices are driving the increase in consumer inflation.

During earnings calls for the Q1 season, a greater number of S&P 500 companies (47) have expressed the term “inflation” through this point in time in more than 10 years. Supply chain disruptions from the pandemic are stoking those fears. But with unemployment still relatively high, I’m not overly concerned about inflation (although it warrants a wary eye).

Rising producer prices beg the question: How are profit margins faring for the S&P 500 in Q1? A low profit margin indicates a low margin of safety and raises the risk that a decline in revenue will wipe out profits and result in a net loss, or a negative margin.

Trends indicate, however, that margins are improving in tandem with the recovering economy. Accordingly, Wall Street remains bullish. 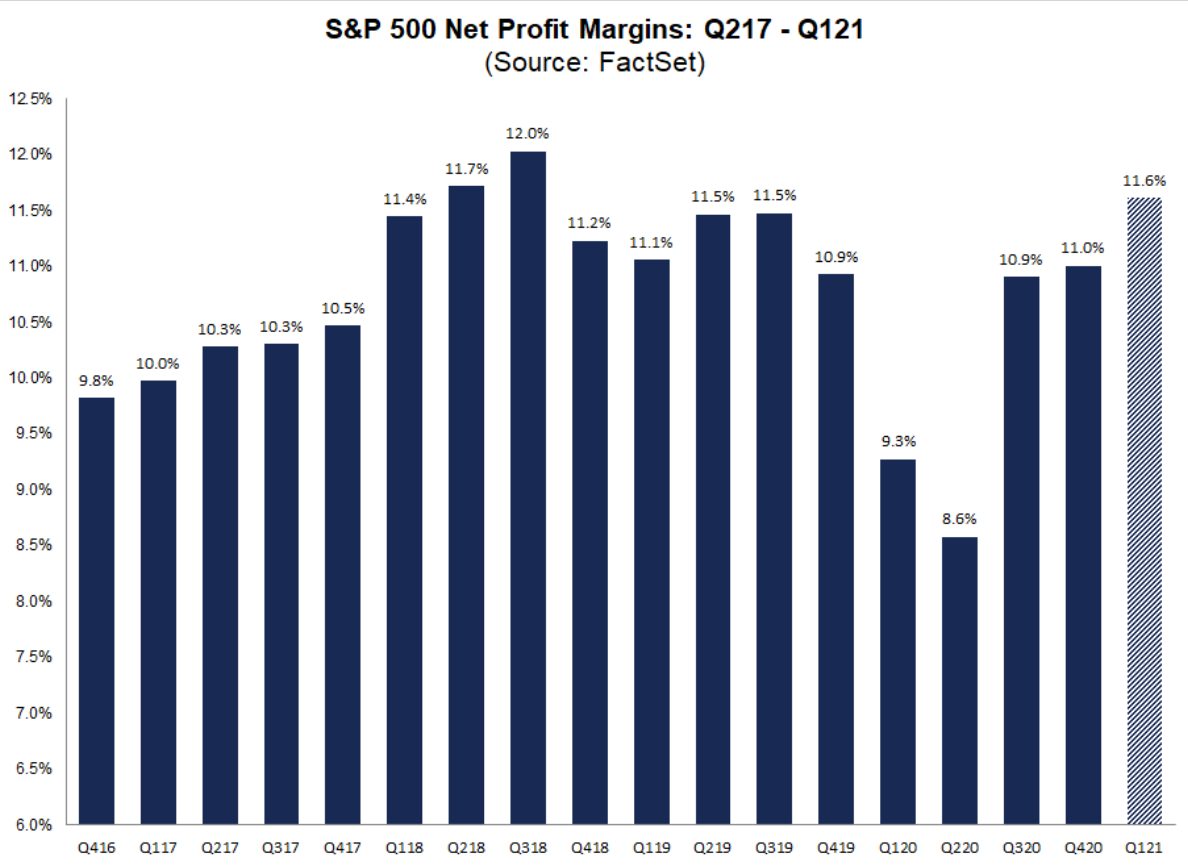 If 11.6% turns out to be the actual net profit margin for the quarter, it will mark the third-highest reported by the index since FactSet began tracking this metric in 2008.

The market is rotating from growth stocks toward value stocks, which means it makes sense to pocket at least partial gains from red-hot tech shares and increase your exposure to cyclical value plays. The bear isn’t likely to come roaring out of his cave anytime soon, but money is shifting into different asset classes. Also make sure your portfolio contains inflation hedges.

In the meantime, if you want to stay bullish but at the same time lower risks, consider Rapier’s Income Accelerator. It’s a new trading service run by Robert Rapier.

Do you have any comments or questions? Let’s start a dialogue: mailbag@investingdaily.com.