When Bad News Is Good News

Wall Street sometimes lives in an upside-down world, where bad news on the economy is viewed as good news…and vice versa.

It reminds me of Bizarro World in the DC comic books that I read as a kid, where black is white, up is down, bad is good, and wrong is right. (I particularly enjoyed the misadventures of “Batzarro, the World’s Worst Detective.”)

We’re seeing this bad-is-good dynamic currently unfold on Wall Street. Last week, we got unexpectedly horrible news on the jobs market that provoked collective gasps of shock in Washington.

But on Wall Street, the bad jobs data provoked cheers. That’s because the negative numbers assuaged fears of rising inflation and a concomitant rise in interest rates.

The U.S. Bureau of Labor Statistics reported last Friday that nonfarm payrolls in April increased by 266,000, versus the consensus estimate of 1 million. That’s quite a shortfall (see chart). 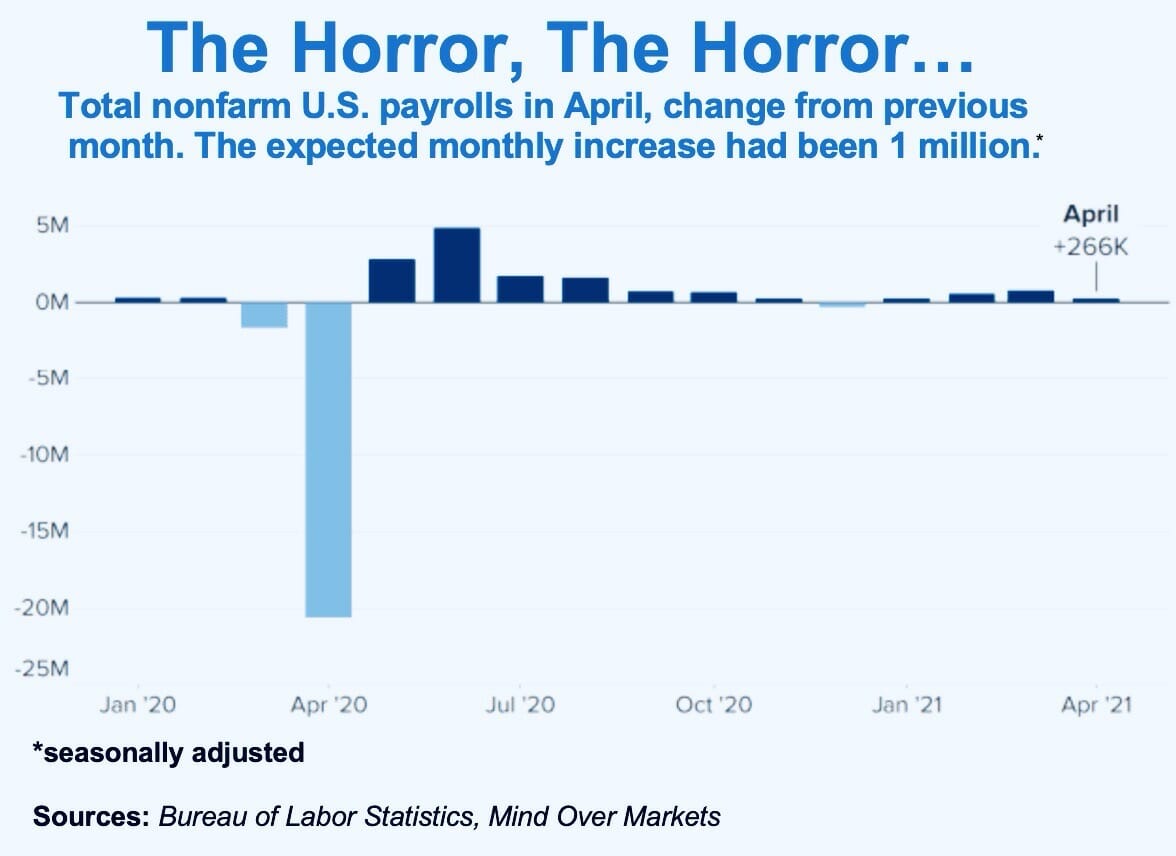 The lack of qualified workers was the major reason behind the unexpectedly meager employment growth. Several industries are encountering trouble in filling positions, in large part because pandemic jitters are making management reluctant to offer higher wages. Workers are confident enough to weigh their options, instead of rushing to low-paying jobs.

However, the day before on Thursday, weekly initial jobless claims during the week ending May 1 put in a decent showing. They fell sharply compared to the previous week, slipping below 500,000 for the first time since the pandemic-induced economic crisis. That marked the fourth straight week of declines, which means the longer-term employment trend is moving in the right direction.

Watch This Video: The Trend Is Your Friend

That said, Friday’s jobs report stole the media spotlight and provoked a lot of tongue-clucking from the political class in Washington. But stocks soared on Friday, as investors interpreted April’s horrible jobs picture as a positive sign that inflation won’t get out of control and the Federal Reserve will remain dovish.

On Monday, stocks retreated from their record highs in the wake of the Colonial Pipeline cyberattack. The Dow Jones Industrial Average fell 34.98 points (-0.10%), the S&P 500 slipped 44.17 points (-1.04%), and the tech-heavy NASDAQ declined 350.34 points (-2.55%). The Dow snapped its five-day winning streak. Tech stocks took the worst beating, as investors sold growth to raise cash for value. In pre-market futures trading Tuesday, the three major indices were trending lower as the energy pipeline remained out of commission for the fifth straight day.

Understanding when the long-term unemployed will return to the workforce has become, particularly in the last few months, the central issue among economists as to when the Federal Reserve should begin looking at raising interest rates in anticipation of higher inflation.

But the problem is that economists are in deep disagreement as to when, or even if, the long-term unemployed will have a material impact on putting pressure on wages. Workforce participation has undergone a multi-decade decline. Even if the rate substantially picked up in coming months and wages rose, it’s unlikely to cause the sort of intense wage growth that would trigger meaningful inflation.

I’ve been hearing certain pundits lately on cable television warn about 1970s-style inflation because of massive fiscal and monetary stimulus. That’s baloney, dished out by partisan hacks who know nothing about economics.

During the 1970s, globalization was less prevalent and developing economies were smaller. Countries such as China weren’t putting the same pressures on wage growth as they are today. Fifty years ago, labor unions still had powerful, albeit diminishing, influence to push for higher wages. Also, during the 1960s, the federal government was paying for both the Vietnam War and The Great Society without raising taxes, a deficit-increasing prescription for inflation. The Middle East oil embargoes of the early 1970s stoked inflation as well.

As measured by the Consumer Price Index (CPI), inflation spiked from 3.4% in 1972 to 12.3% in 1974. By 1980, inflation was at 14%. It took Federal Reserve Chair Paul Volcker’s medicine in the form of brutal interest rate hikes to finally kill the inflation beast in the early days of Ronald Reagan’s first term. Volcker allowed the fed funds rate to rise to more than 20%, the sort of “vig” charged by Mafia leg-breakers.

In 2021, we’re not even close to these kinds of conditions. Inflation has been rising in tandem with the recovering economy, but the bad news of last Friday’s employment report is the good news you needed to hear. Economic growth continues, but there’s less risk that it will overheat. The CPI currently hovers at only about 2.6%. The “hyper-inflation” argument you hear on the TV gabfests is a straw man.

How can stocks thrive with so many people unemployed? No matter how many times I repeat it, many people just won’t believe it: the stock market is not the economy.

The stock market is about one segment of the economy, namely future corporate profits. Research firm FactSet expects double-digit earnings growth for the remaining three quarters of 2021, with earnings growth projected to peak in Q2 2021 at 58.3%. The table is set for further stock market gains this year. Stay invested, with a rotation toward value.

Editor’s Note: Looking to tap this bullish momentum with a specific investment opportunity? Consider the rise of cashless payment systems. During the pandemic, the cashless society has risen to technological heights once only imagined in science fiction.

After months of research, we’ve pinpointed an innovative company that’s in the vanguard of cashless payments. Few analysts cover this company and that’s good news for you. The time to buy is now, before you see the company covered on CNBC and its shares are bid to the moon. Click here for details.