Medical Pot: Haven’t Got Time For The Pain

To what extent has marijuana flipped the narrative about drugs? Weed has gone from Reefer Madness to…Reefer Gladness.

Cannabis is increasingly viewed as a highly effective way to not only alleviate physical pain, but also fight addiction to deadly drugs such as opioids. Indeed, marijuana is far less toxic than many of the drugs routinely prescribed by doctors.

An average of 38 people die each day from overdoses involving prescription opioids, totaling more than 14,000 deaths annually. The most dangerous drug pusher isn’t your local marijuana seller; it’s the health-industrial complex. Below, I explain how marijuana is addressing the opioid scourge and entering the mainstream of pain management.

The legalization of marijuana in the U.S. has been accelerating, particularly for medical cannabis. As of this writing, 16 states and the District of Columbia are home to adult-use (i.e., recreational) cannabis markets, while 36 states have established medical markets.

We’re witnessing a Golden Age of scientific research into the medical efficacy of marijuana. New reports attesting to the health benefits of pot are continually coming to light. Patients with chronic ailments and diseases that are unresponsive to conventional therapies are increasingly looking to marijuana as an alternative. That’s especially true in relation to invasive and addictive therapies.

The report revealed how medical cannabis users are not only resorting to pot for pain management but also making the substance an integral part of conventional therapies.

As such, medical cannabis poses a threat to the market share of Big Pharma and has the potential to undercut sales of non-marijuana blockbuster drugs. That’s a problem for the major drug companies but a huge opportunity for marijuana investors. It’s a trend you need to watch, in your efforts to find the right marijuana investment.

Read This Story: 12 Criteria for Picking The Right Pot Stock

According to the New Frontier report, pain management is the number one application cited by medical cannabis consumers as motivation for pot use, coming in at 59% of respondents (see chart). 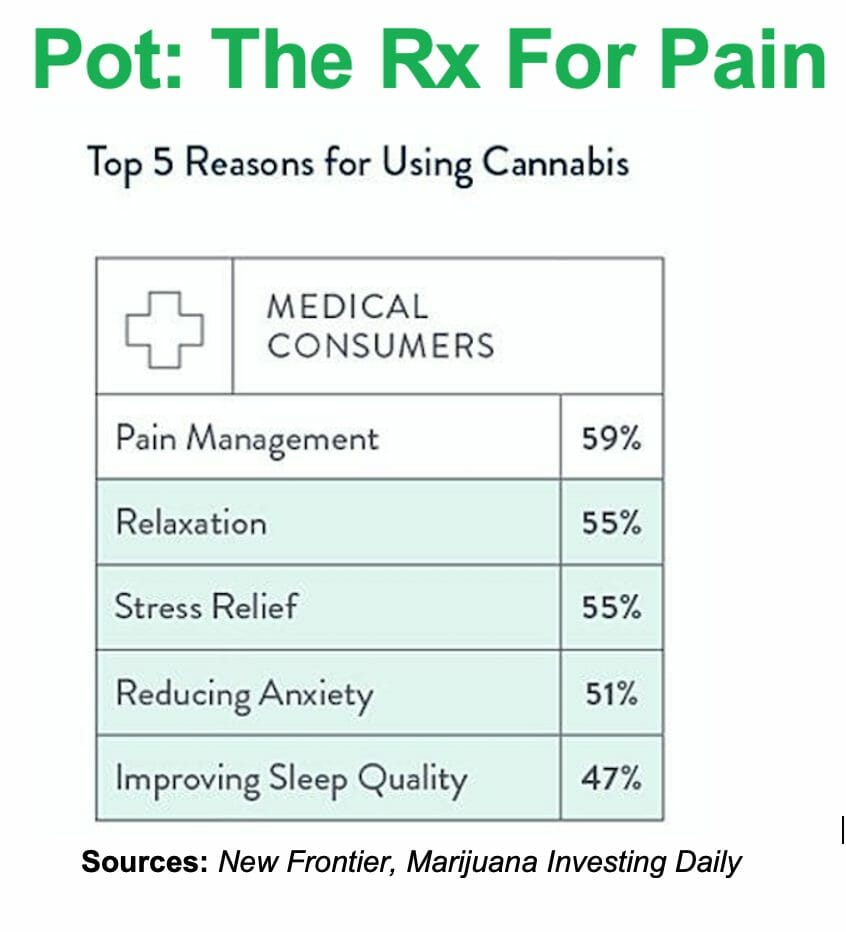 Research underscores the value of cannabis as an analgesic and anti-nausea remedy. What’s more, with the epidemic of deadly opioid addiction over the past two decades, medical cannabis has shown promise as an alternative, non-addictive (and non-deadly) technique for pain management.

The study’s results come on top of an increasing body of research proving that medical cannabis accessibility significantly reduces statewide opioid use and even opioid deaths.

As the medical benefits of marijuana become all too clear, an increasing number of states are legalizing cannabis.