The Rush Is On For Hard Assets

My wife and I have most of our money sitting in cash right now. Normally, I’d take at least half of it and put it in the stock market. But with stocks trading at high multiples to earnings, I don’t want to risk taking a big loss if the market goes through a sudden correction.

However, I am also not thrilled with the very low interest rate on our savings account. I understand why banks cannot afford to pay much interest at the moment. They don’t need more deposits; they need more loans!

For that reason, we have been considering putting some of our money in hard assets such as precious metals and real estate. If inflation picks up steam, they should continue to appreciate even if the stock market reverses direction.

It looks like a lot of other investors are beginning to think the same way. Since bottoming out below $1,700 an ounce at the end of March, the price of gold broke above $1,800 last week.

Perhaps most tellingly, the Fidelity Global Commodity Stock Fund (FFGCX) is up more than 27% since the end of January. This fund’s assets are roughly equally divided among energy, agriculture, and mining stocks. 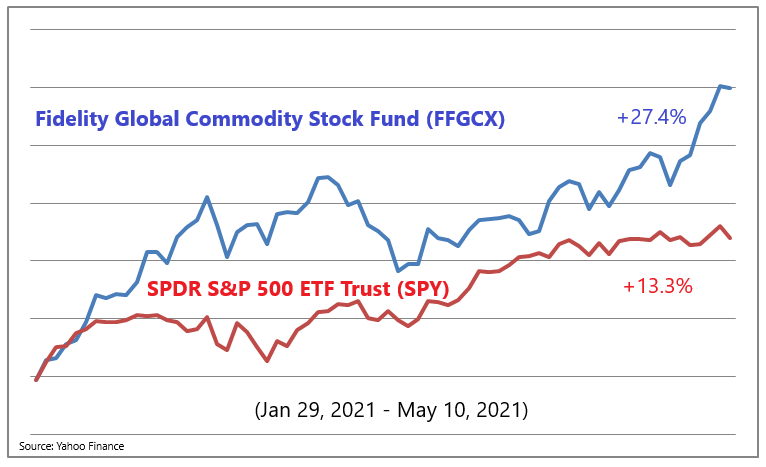 Over the same span, the SPDR S&P 500 ETF Trust (SPY) has gained less than half that amount. This fund’s performance is dominated by giant tech stocks that are consumers of hard assets.

As you can see, most of that differential in performance has occurred over the past three weeks. While FFGCX has spiked in value, SPY has gone nowhere.

The message the stock market is sending is clear. Higher commodity prices are on the way and will become a dominant theme on Wall Street in the months to come.

However, it isn’t just commodity producers that are benefiting from the rotation towards hard assets. Shares of home improvement retailers are also rising. Consumers are scrambling to purchase lumber and other materials that are skyrocketing in price as supplies run low.

During the past week, Lowe’s Companies (NYSE: LOW) and The Home Depot (NYSE: HD) both rose while the S&P 500 Index was falling. At the same time, the iShares Global Timber & Forestry ETF (WOOD) reached an all-time high.

Normally, rising timber prices would be viewed as bad news since that depresses demand and squeezes profit margins for the retailers that sell lumber. But these aren’t normal times, and rapidly escalating home values make upgrading your current home cheaper than buying a new one.

Lowe’s and The Home Depot are both scheduled to release their first-quarter results next week. Based on their recent performance, it is apparent that Wall Street is expecting to hear good news from both companies.

I do not doubt that their Q1 results will be impressive. With most stores fully reopening this spring, I can easily believe that many homeowners spent a lot of money sprucing up their properties.

What I am not so sure about is what type of guidance these companies will give for the remainder of the year. Sooner or later, rising commodity prices will most likely suppress demand for many of the goods sold by these stores.

At the start of this week, LOW and HD were valued at 27 and 28 times forward earnings, respectively, compared to a multiple of 23 for the S&P 500 Index. That implies strong earnings growth over the remainder of this year, and beyond.

A PEG ratio of less than 1.0 means that a company has been able to grow earnings at a faster rate than the stock market is valuing them. Those are the types of “growth at a reasonable price” (GAARP) stocks that Lynch used to rack up a 29.7% average annual return at the Fidelity Magellan Fund (FMAGX) from 1977 through 1990.

At present, LOW has a PEG ratio of 2.0, and HD’s is even higher at 3.7. Those multiples suggest that neither company will be able to grow earnings at a fast enough rate to justify their current share prices.

So far this year, we have seen the stock market careen from one asset class to another in search of value. Over the past four months, money has flowed in and out of you only live once (YOLO) stocks, cryptocurrencies, special purpose acquisition companies (SPACs), and now commodity plays.

Rather than chase after the next trendy investment concept, consider tapping long-term growth trends that will be around for a long time.

One such “mega-trend” is the rise of telemedicine. During the pandemic, quarantined consumers got accustomed to telemedicine, more than ever before, because of lockdowns and social distancing. As COVID restrictions ease, this development will accelerate.