Peloton Shareholders Are Being Taken For a Ride

In September, I commented on the soaring interest in exercise bike manufacturer Peloton Interactive (NSDQ: PTON). Over the previous four months, PTON doubled in value to reach a then-record share price of $90.

I said then, “I believe PTON has become overbought. Currently valued at more than 200 times forward earnings, the stock is priced for perfection.” Turns out, PTON still had farther to go before hitting a wall.

After cresting above $170 in December, PTON fell below $90 last week before leveling off. In short, the stock has taken a giant spin around the block and is back to where it was eight months ago. 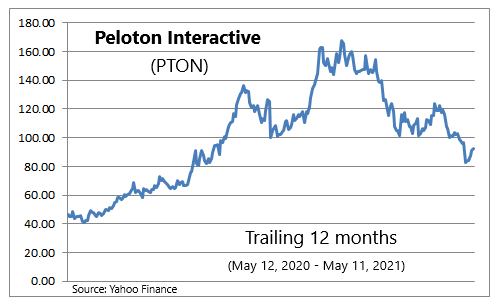 I wish I could say that Peloton’s stock market swoon was due to nothing more than a simple reversion to the mean. Last year, PTON soared in value as the coronavirus pandemic increased demand for at-home exercise equipment.

That motivated Amazon.com (NSDQ: AMZN) to team up with a private company that offers a product much cheaper than Peloton’s pricey exercise equipment. That alone would be sufficient reason to push its share price lower.

Sadly, there is much more to the story than that. A six-year-old child died in March after being pulled under a Peloton treadmill.

Initially, Peloton refused to recall that model after being advised to do so by the Consumer Product Safety Commission (CPSC). Three weeks later, Peloton issued a recall and admitted that it should have done so sooner.

As you might expect, dozens of law firms are jockeying to file a class-action shareholder lawsuit against Peloton. The company is being accused of making false and misleading statements and failing to act in a timely manner.

We’ve seen this type of event play out many times in the past. Last month, two people died in a crash while operating a Tesla (NSDQ: TSLA) vehicle in autopilot mode.

In that case, the victims were adults and to some degree were responsible for the hazardous conditions that contributed to the accident. Also, the company previously issued a warning against operating the vehicle without anyone occupying the driver’s seat.

For those reasons, there is little basis for a class-action lawsuit against Tesla. In Peloton’s case, its potential culpability is considerably less clear.

The lack of clarity about how the company’s current crisis is likely to play out creates a short-term investment opportunity. If it turns out that Peloton knew it had a problem prior to the accident that it failed to act on, its share price could fall much farther.

But if this was nothing more than a tragic event that could not reasonably be anticipated, Peloton should eventually recover. In that case, its share price could soar higher if it can successfully fend off Amazon.

In a situation like this, a “long options straddle” may be the best way to go. To do so, you would need to buy both a call and a put option with the same strike price and expiration date.

A few days ago while PTON was trading near $90, the call option that expires on September 17 at the $90 strike price could be bought for $13. At the same time, the corresponding put option could also be bought for $13.

For this trade to be profitable, the PTON would have to move at least $26 in one direction or the other within the next four months. That equates to a move of about 30%.

If you think a price change of that magnitude in just four months is unlikely, consider this. During the past year, PTON has moved more than plus or minus 30% in six of the nine rolling four-month periods.

Of course, that is no guarantee that it will happen this time. But it does illustrate how quickly its share price can move under certain conditions.

Read This Story: Don’t Fear Volatility; Ride It For Profits

Those conditions include more than Peloton’s potential legal liability and the threat of Amazon. The severe quarantine restrictions that sent everyone indoors last year are being lifted. That means people can start exercising in gyms again.

Last summer, I speculated that we may see a lot of used Peloton bikes hit the market this year. If that happens, demand for new bikes may soften.

However, an unexpected resurgence of COVID-19 in the United States this summer could send exercisers scurrying back into their homes. In that case, there could be a surge in demand for new Peloton bikes.

That kind of uncertainty is what makes investing in the stock market so challenging. Even when you know what the risks are, they can be difficult to quantify. That’s why I suggest you consider using a proven investment strategy that works in all types of market environments.

As the mastermind of Rapier’s Income Accelerator, Robert has devised a new, safe way to quickly generate cash on demand, regardless of the market’s ups and downs. Click here for details.