The GOP Gets Mellow on Weed

Marijuana legalization has achieved such enormous strides, many people are starting to take access to weed for granted. The historical context of the War on Drugs is being forgotten.

The lifting of restrictions against cannabis remains a social, political and economic revolution and as such, the “green rush” still represents the investment opportunity of a lifetime.

For a quick refresher course in marijuana history, I bring you Henry J. Anslinger.

Anslinger served as the first commissioner of the Federal Bureau of Narcotics during the presidencies of Hoover, Roosevelt, Truman, Eisenhower, and Kennedy. The bureau was the precursor of the modern-day Drug Enforcement Administration. Anslinger played the key role in the introduction and passage of the Marijuana Tax Act of 1937, which outlawed possessing or selling pot. Anslinger once told the nation:

“There are 100,000 total marijuana smokers in the U.S., and most are Negroes, Hispanics, Filipinos and entertainers. Their Satanic music, jazz and swing, result from marijuana usage. This marijuana causes white women to seek sexual relations with Negroes, entertainers and any others.​​”

So, when Republican members of Congress introduce a bill to federally legalize marijuana, I still find it a big deal. You should, too.

On May 12, two GOP members of the U.S. House of Representatives introduced a new bill to lift the federal ban on marijuana. Other bills to accomplish the same goal have been sitting in Congress for a couple of years, but this proposed legislation goes much further. In fact, this bill is unprecedented in scope.

In addition to removing the federal ban, the bill seeks to protect banks that service state-legal cannabis businesses. It also wants to ensure that military veterans are permitted to use marijuana in compliance with state laws. 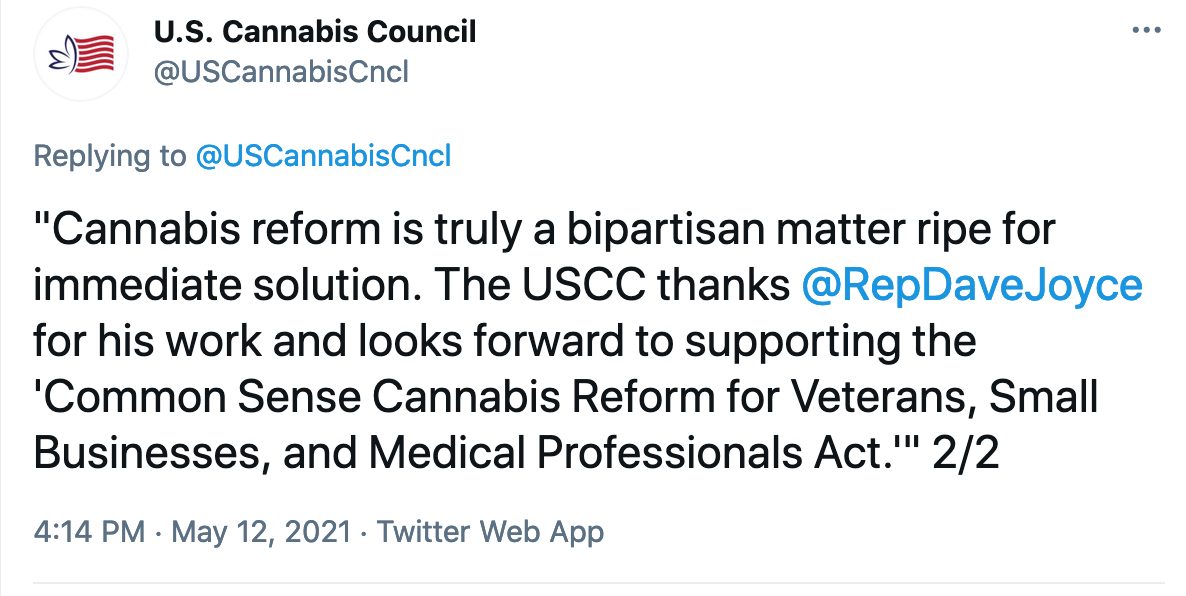 It’s significant that the sponsors of the legislation are conservative Republicans. The Democratic party has long embraced marijuana legal reform, usually against the opposition of the GOP. The bill that was introduced Wednesday reflects the changing political dynamic for weed and is yet another signal that the federal ban on pot is doomed.

The main pillar of the legislation is to federally deschedule cannabis, similar to previous bipartisan proposals. However, this bill goes several steps further by providing additional legal protections, as well as mandates for federal studies into medical cannabis.

“With more than 40 states taking action on this issue, it’s past time for Congress to recognize that continued cannabis prohibition is neither tenable nor the will of the American electorate,” Joyce, co-chair of the Congressional Cannabis Caucus (CCC), said in a press release.

Into the 21st century…

Under the proposal, marijuana would be removed from the Controlled Substances Act. Marijuana could be imported and exported across states, although transporting marijuana to states where such activity is illegal would remain federally banned.

The task of developing regulations for marijuana would fall to the Food and Drug Administration and the Alcohol and Tobacco Tax and Trade Bureau. Those regulations would have to be “similar to federal rules regulating alcohol,” the bill stipulates.

“For too long, the federal government’s outdated cannabis policies have stood in the way of both individual liberty and a state’s 10th Amendment rights,” Young, also co-chair of the CCC, said. “It is long past time that these archaic laws are updated for the 21st century.”

Another provision of the proposed legislation stipulates that financial services institutions with state-legal marijuana businesses as customers can’t be penalized by federal regulators.

In addition, the legislation allows military veterans to use, possess and transport medical cannabis in compliance with state law. It also allows doctors to discuss medical marijuana use with veterans in states where pot is legal and they can “recommend, complete forms for, or register veterans for participating in a treatment program involving medical marijuana.”

“This bill takes significant steps to modernize our laws by removing cannabis from the Controlled Substances Act and allowing the VA to prescribe medical cannabis to veterans, in addition to finally permitting state-legal cannabis businesses to utilize traditional financial services,” Young said. “I call on my colleagues on both sides of the aisle to stand with us in this crucial effort.”

Marijuana advocates have placed particular energy in easing the restrictions that military veterans face in trying to get access to medical marijuana. Already pending in the House and Senate is the Veterans Medical Marijuana Safe Harbor Act, a bill that would make it legal under federal law for military veterans to use, possess, or transport medical marijuana in state-legal systems.

Veterans suffering physical or emotional distress are increasingly turning to medical cannabis as an effective alternative to opioids and other conventional medications. In addition to treating body wounds, marijuana is effective in treating depression. Veterans represent 7% of the American population, yet account for 20% of the national suicide rate.

Indeed, as the medical benefits of marijuana become all too clear, an increasing number of states are legalizing cannabis.

Cannabis investments are a must for your portfolio, but the trick is finding the right pot stocks. Some cannabis stocks are stellar investments. Many others are not. You need to conduct due diligence. The good news is, we’ve done the homework for you. Looking to make money on marijuana legalization? For our latest research on the most profitable pot stocks, click here.