Airbnb: No Room for Error

It isn’t easy to do, but sometimes a business will lose more money than it brought in as revenue. That’s what happened to Airbnb (NSDQ: ABNB) during the first quarter of this year. The company lost $1.17 billion dollars, which equates to 132% of its gross revenue.

In this case, Airbnb took substantial write-downs during the quarter. Those items included $377 million to pay off debt and $292 million in adjustments to warrants. The company also incurred a $113 million impairment related to office space.

If you back out those one-time expenses, the quarter actually wasn’t so bad. Airbnb is still operating at a loss, but its adjusted EBITDA (earnings before interest, taxes, depreciation, and amortization) was only 7% less than revenue compared to shortfalls of 40% in 2020 and 30% in 2019.

This is the first set of quarterly results Airbnb has released since going public in December. At that time, I commented on some of the risk factors confronting the business. In particular, I was concerned that many of the property owners that list on Airbnb might go under without additional federal financial assistance.

I said then, “Airbnb’s business model is dependent on its hosts to provide properties for its customers to rent. Without them, the entire business goes down the drain.” Unfortunately, there is still no way to determine how many properties are no longer operating as Airbnb rental properties.

What we do know is that the number of “nights and experiences booked” during Q1 this year was 21% less than in 2019 before COVID-19 upended the vacation market. Due to higher rental rates, the “gross booking value” of those stays was 3% more than it was two years ago.

Even if we knew what the average booking value was this year versus two years ago, we could not accurately estimate how many properties have been removed from Airbnb’s inventory. Some property owners may have decided to temporarily suspend hosting guests until COVID-19 is fully eradicated.

In that case, it may not be until next year that we get a more accurate picture of exactly how much damage has been done to Airbnb’s housing supply. This year’s numbers are inflated by a combination of longer stays and higher rental rates.

The company acknowledged that this year’s revenue bump was “driven by strength in North America and higher Average Daily Rates (ADRs) during the quarter.” But once demand for vacation property subsides to historically normal levels, those numbers could change dramatically.

For that reason, ABNB has come full circle since its initial public offering six months ago. Although officially priced at $68 per share, the stock started trading publicly on December 10 at $146. Two months later, it peaked near $220 before leveling off. Since then, it has gradually receded before falling below $132 last week. 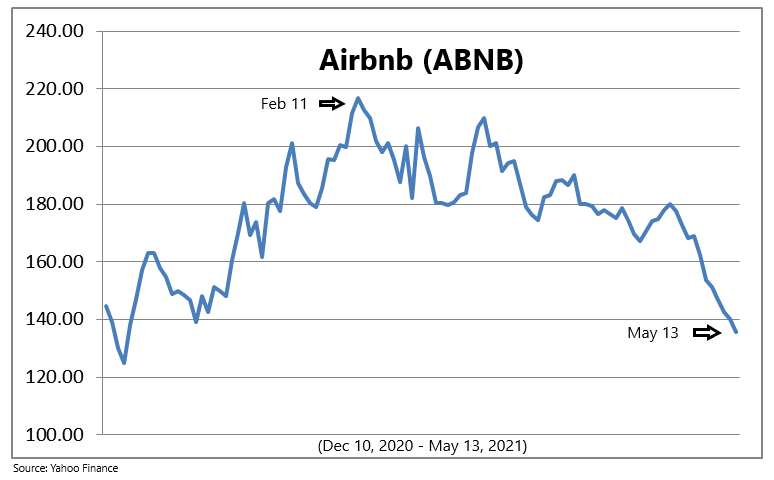 It appears that the number-crunchers on Wall Street aren’t sure what to make of Airbnb’s prospects. If they were confident that the company would soon be back on its pre-COVID growth curve, its share price would not be languishing.

My guess is they have the same concern that I do. If Airbnb has lost a lot of its hosts, once the average length of stays and ADRS decreases, the company’s revenue model could take a big hit.

Long story short, two things need to happen for Airbnb to get back on an upward growth trajectory:

On May 24, Airbnb will make a special announcement that it describes as “the most comprehensive update to Airbnb’s service in 12 years.” The company goes on to say that it will “share insights on how travel is not only recovering, but fundamentally changing.” Finally, it promises to “unveil a simpler and more inspiring guest experience, and upgrades that make it even easier for anyone to be a Host.”

That sounds like a sales pitch to me. Specifically, this appears to be an effort to recruit more property owners to become Airbnb hosts. The company’s performance in 2022 may depend on how successfully Airbnb can rebuild its depleted inventory.

The coronavirus pandemic has disrupted the travel industry like no other event in my lifetime. COVID-19 has disrupted many other industries, too. Consider the fast rise of telemedicine. When it comes to remote medical consultations, new technology is showing people what’s possible.

During the pandemic, quarantined consumers got accustomed to telemedicine, more than ever before, because of lockdowns and social distancing. As COVID restrictions ease, this development will accelerate.