Consumers are clamoring for hemp products, but federal regulators have been slow to mainstream the plant. That may soon change, as Congress loses patience with bureaucratic recalcitrance.

In this instance, two liberal Democrats have joined hands with a conservative Republican, showing once again that efforts to legalize marijuana and hemp are creating strange political bedfellows.

The Hemp Access and Consumer Safety Act, introduced on May 19 by Sens. Ron Wyden (D-OR), Rand Paul (R-KY) and Jeff Merkley (D-OR), would exempt “hemp, hemp-derived cannabidiol, or a substance containing any other ingredient derived from hemp” from certain restrictions that have prevented the emergence of legal consumable hemp products.

For its part, the U.S. Food and Drug Administration (FDA) has been missing-in-action when it comes to enacting hemp regulations, which prompted the bipartisan action of the three senators.

The bill also stipulates that federal officials may “establish labeling and packaging requirements” for hemp-derived products, especially in regard to cannabidiol (CBD).

“CBD products are legally being used and produced across the nation. Yet because the FDA has failed to update its regulations, consumers and producers remain in a regulatory gray zone,” Senator Wyden said in a press release. “It’s been more than two years since I worked with colleagues to have Congress legalize hemp and hemp-derived products. It’s long past time for the FDA to get with the program, for the sake of American consumers and farmers.”

Senator Paul said that “hemp-derived CBD products and businesses have earned their recognition in the marketplace, but the FDA, unfortunately, hasn’t treated them like any other food additive or dietary supplement.” Paul added that the new bill “provides a huge relief to hemp farmers, processors, and merchants.”

Senator Merkley stated: “Every day that the FDA drags its feet to update its CBD regulations, hemp farmers are left guessing about how their products will be regulated, and real economic gains for workers and business owners in Oregon and across the country are left on the table. Hemp-derived CBD products are already widely available, and we all need FDA to issue clear regulations for them just like they do for other foods, drinks, and dietary supplements.”

Cannabis the drug and hemp the industrial product both contain tetrahydrocannabinol (THC), the substance that gets users high, but they are distinct strains with unique chemical compositions and uses. Hemp is naturally high in CBD and low in THC; the reverse is true of cannabis.

Growing industrial hemp was banned in the 1970s when the federal government toughened the criminal code on marijuana. Hemp was ensnared in the “War on Drugs,” but it contains little of the psychoactive component THC found in marijuana.

But these days, hemp is legal, thanks to the 2018 Farm Bill. Large corporations are infusing the newly legal plant within a myriad of commonly found consumer products.

Hemp is the strongest natural fiber in the world and boasts up to 50,000 uses, many of them in the industrial sector. Hemp also conveys several food, beverage, health, and personal care applications. See the following chart: 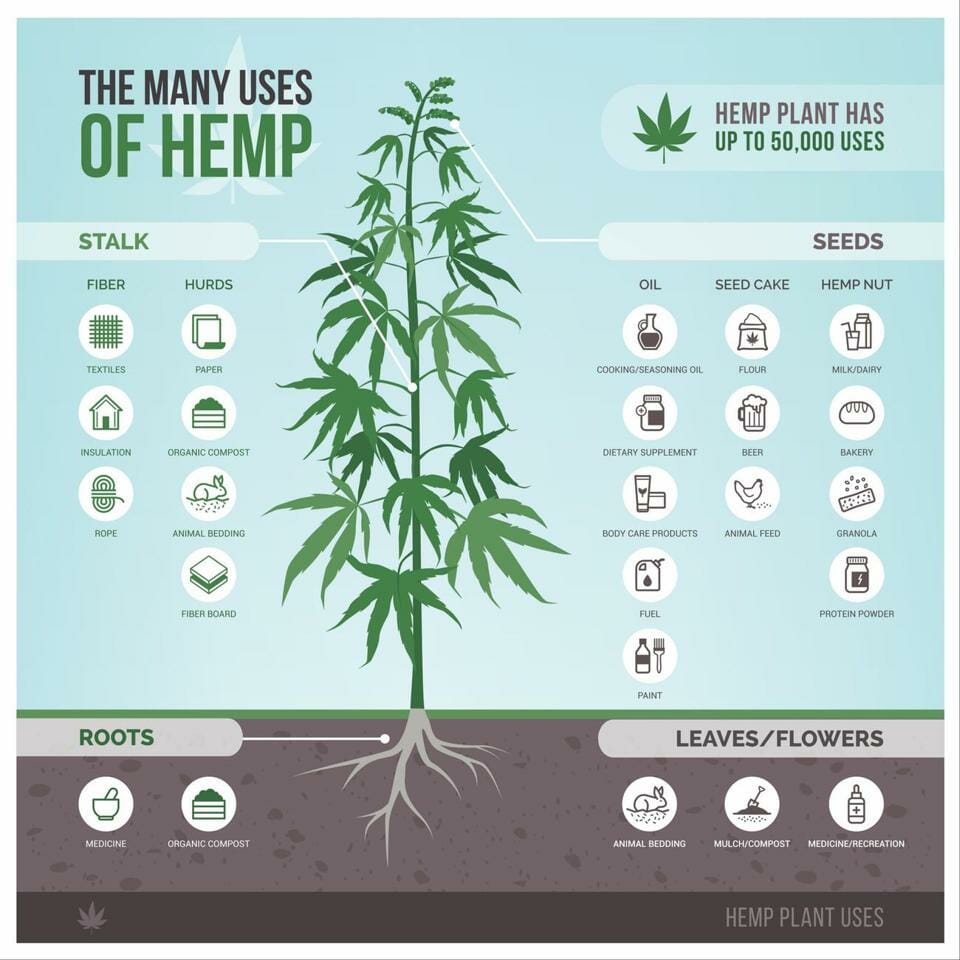 As the hemp industry gets bigger and invades the consumer retail market, an increasing number of marijuana companies are branching out into hemp and making it a part of their product menus.

However, federal regulations governing the plant have lagged behind. It’s indicative of hemp’s widespread popularity that, in this politically polarized world, Republicans and Democrats could come together on this issue. We’re seeing a similar political dynamic with marijuana, as conservative “red states” increasingly legalize cannabis.

Hemp and marijuana are symbiotic markets. Marijuana tends to get most of the media attention, but don’t give short shrift to the booming hemp industry. Indeed, hemp is becoming a nationwide consumer fad.

Want to make money from the trends that I’ve just described? For our latest report on the best investment opportunities in cannabis, click here.