Welcome to my video presentation for Monday, May 24, 2021. For greater details on the video’s investment theme, see my article below.

We’ve witnessed an uptick in volatility, as mixed economic reports combined with fears over inflation and rising interest rates have whipsawed investor emotions. However, the economy overall is accelerating and corporate profits are surging, placing a sound foundation beneath the stock market rally.

First-quarter 2021 earnings have come in strong and analysts project double-digit earnings growth for the remaining three quarters of 2021, with earnings growth expected to peak in Q2 at 54.6%.

Interest rates are getting higher, sure, but historically they’re still not high. During the previous five stock market peaks, the benchmark 10-year U.S. Treasury note averaged 6.8%; it currently hovers at only 1.6% (see chart). 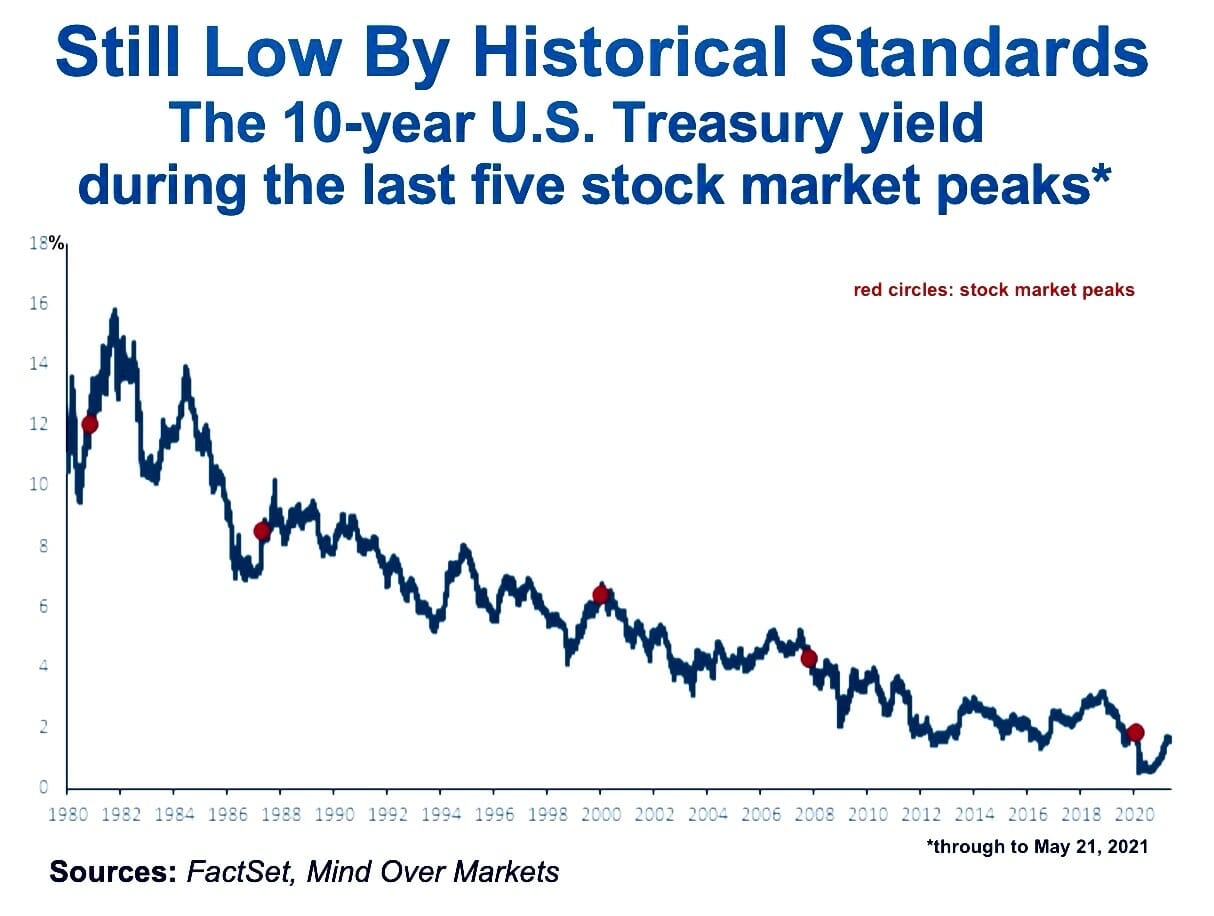 Looming large in the coming week will be the personal consumption expenditures (PCE) index, a key inflation indicator that’s scheduled for release on May 28 by the U.S. Bureau of Economic Analysis. Inflation numbers have been running hot and if the PCE for April shows a big year-over-year jump, it could spook investors.

But with the hotter economy comes an improving jobs market. Despite the hand-wringing about inflation in certain political circles, most economists as well as the Federal Reserve steadfastly argue that recent inflationary spikes represent a necessary (and temporary) price to get the economy back on its feet.

The Labor Department reported Thursday that initial claims for jobless benefits totaled 444,000 last week, below the consensus expectation of 452,000. The total marked a decline from the previous week’s 478,000 and was the lowest since the nadir of the coronavirus pandemic in late March 2020.

The mixed economic scenario put stocks on a roller coaster last week, with sharp sell-offs followed by powerful rebounds. When the dust settled by the closing bell on Friday, the major indices hadn’t moved all that much for the week. Global stocks and the tech-heavy NASDAQ finished in the green (see table). 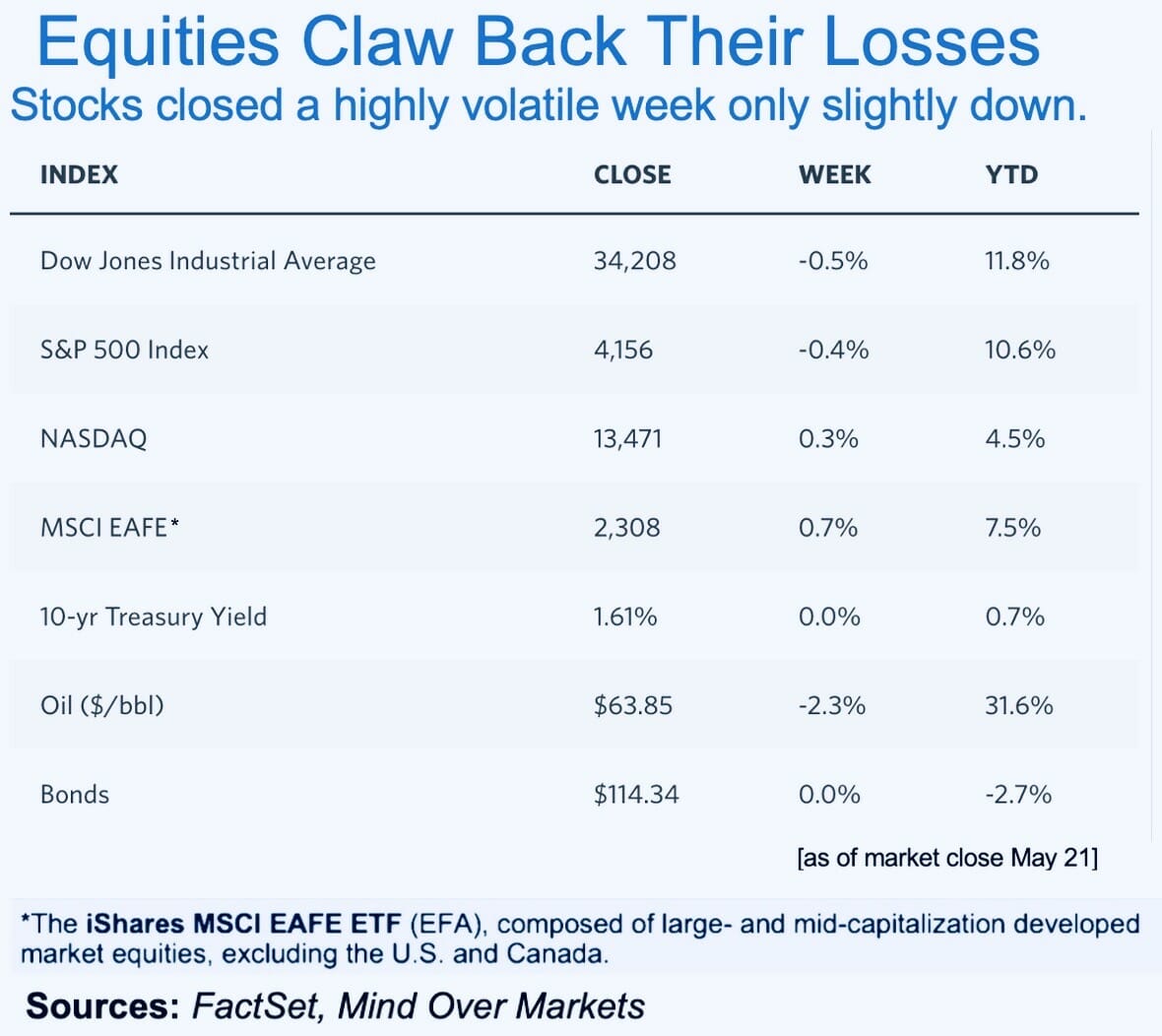 Cryptocurrencies were particularly volatile last week, notably the largest and best-known crypto, Bitcoin (BTC). Rampant speculation among exotic assets such as crypto is a red flag that demands caution.

I remain optimistic about the stock market this year and expect further gains ahead, but you should fasten your seat belts and stay properly diversified.

Read This Story: Bitcoin, Musk, and The Tweets Heard Round The World

If you hold Bitcoin, you’ve been reaching for the antacid lately. Contradictory comments by celebrity billionaire Elon Musk, as well as disparaging remarks from public officials, have sent Bitcoin tumbling (see chart). 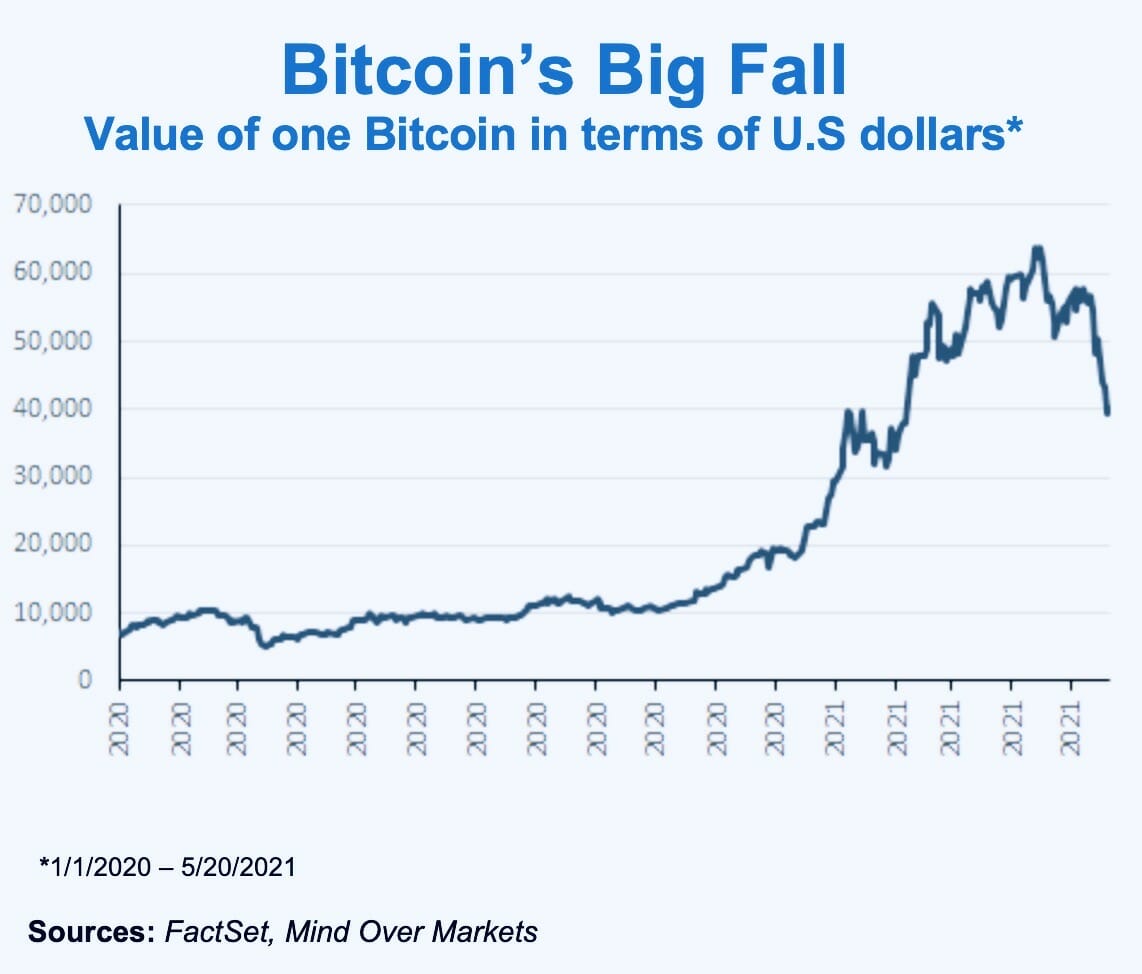 Federal Reserve Chair Jerome Powell last week posted a video announcement in which he suggested that the U.S. central bank would start cracking down on cryptos. “To date, cryptocurrencies have not served as a convenient way to make payments, given, among other factors, their swings in value,” Powell said.

Amid these myriad risks, how can you partake of growth but still protect your portfolio? International diversification is key, as recent data from first-quarter corporate earnings season attests.

As of market close May 21, 95% of the companies in the S&P 500 have reported earnings for the first quarter of 2021. For Q1 2021, the blended year-over-year earnings growth rate for the S&P 500 is 51.9%. The blended revenue growth rate for Q1 2021 is 10.7%. Granted, last year’s baseline was particularly low because of the pandemic, but still, those numbers are pretty darned good and they bode well for stock prices.

FactSet determined that companies with greater international exposure performed much better than U.S. companies that were more domestic oriented. 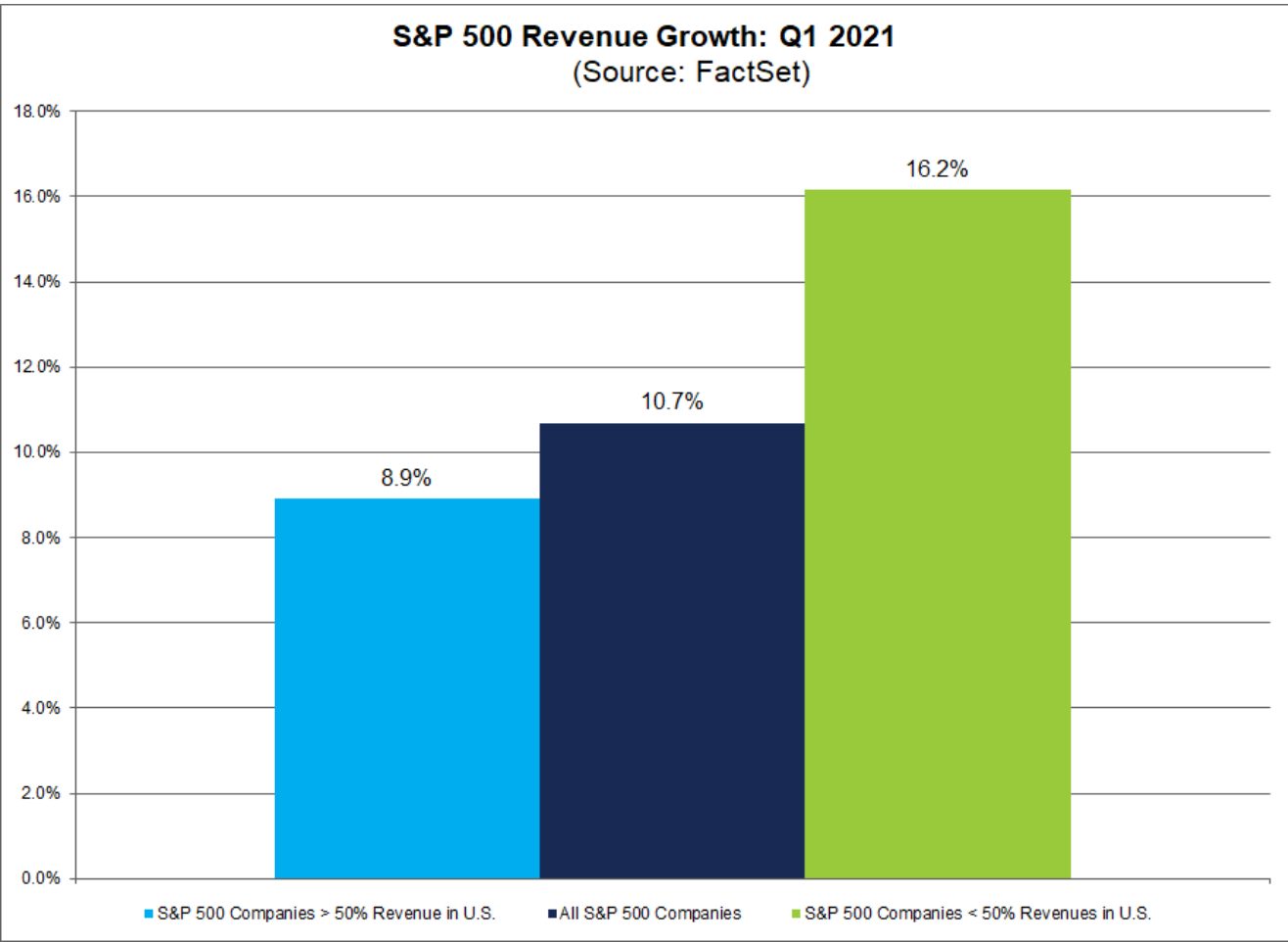 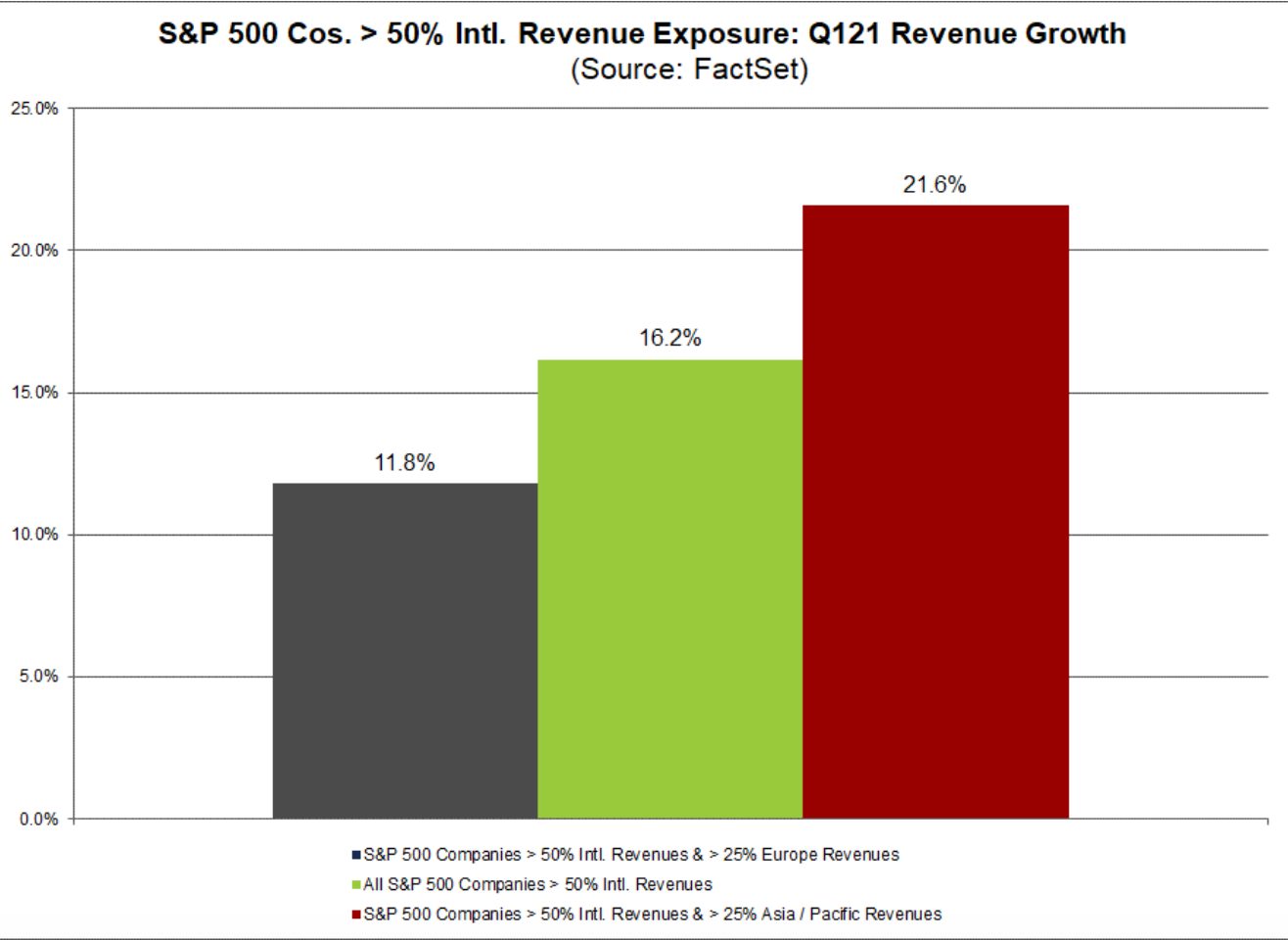 Positive factors for the region include population growth, higher education levels, greater technological savvy, and the expansion of a free-spending consumer class that skews toward a younger demographic. Countries in the East also were quick to get a handle on the pandemic.

China has resumed its role as global growth engine. The country’s Q4 2020 growth rate exceeded consensus expectations, pushing growth to 2.3% for the full year. This comeback made China one of the few major economies in the world to record positive growth during a year battered by the pandemic.

Economists expect China’s economy to expand at the torrid pace of 8.2% in 2021, compared to a little over 6% for the U.S.

The upshot: If you want to tap market-beating growth that isn’t overly reliant on U.S. economic indicators, go global. According to the World Bank, the U.S. accounts for about 55% of the world’s stock market value. That means 45% (to the tune of more than $40 trillion) resides overseas. In fact, 80% of the world’s publicly traded companies are foreign-based, compared with 20% headquartered in the U.S.

I also suggest you increase your exposure to gold. Gold provides shelter during crises and rising inflation. The “yellow metal” has experienced a healthy run-up in prices over the past year and it has further to run.