You don’t hear much talk about Apple (NSDQ: AAPL) these days. That’s because its share price has gone nowhere over the past six months.

Since cresting above $145 on January 25, AAPL has gradually lost ground in the face of rising interest rates. It closed last week below $125, which is where it was trading in mid-December.

From a long-term perspective, Apple is still one of the stock market’s most reliable performers. Over the past five years, AAPL has more than quintupled in value. 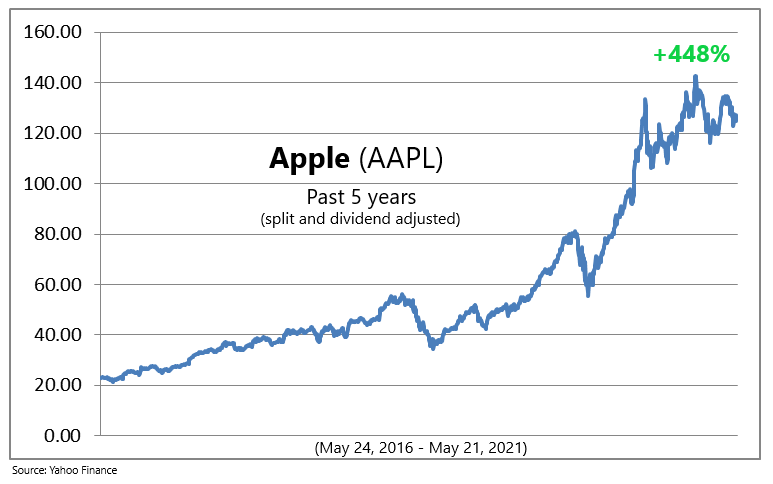 If I could go back in time, I’d take every penny in my retirement account and load up on Apple 20 years ago. I’ll talk more about that next week.

The decision to buy a stock like Apple is easy. The much harder decision to make is when, if ever, to sell it. Last June, I sold AAPL out of the Personal Finance Growth Portfolio. At that time, it was trading near $90 (post-split).

My concern was Apple’s soaring forward price-to-earnings (FPER) multiple. As I noted then, “Until recently, Apple’s FPER was less than the multiple for the S&P 500 Index.” In my eyes, that made Apple one of the great value stocks of the past decade.

But somewhere along the way, Apple became a growth stock. Its FPER nearly doubled over the past two years. Now, AAPL trades at an FPER of 25 compared to a multiple of 22 for the S&P 500.

The good news is that growth stocks performed quite well during the past year. The bad news is the threat of inflation is now starting to weigh heavily on them.

To be sure, the FPERs for all of those companies are still quite high. It isn’t that they are suddenly a bargain. They were too richly valued during the height of the coronavirus pandemic.

Based on its fiscal 2021 second-quarter results released a month ago, Apple appears fairly valued to me. The company reported record revenue of $89.6 billion for the March quarter.

Apple noted that “International sales accounted for 67 percent of the quarter’s revenue.” That degree of penetration in foreign markets is one reason why Apple reported record sales revenue in the first place.

However, it may also prove to be problematic if the U.S. dollar continues to weaken. That’s because sales in foreign currencies must be converted to the American dollar.

A few days ago while AAPL was trading near $128, the call option expiring on September 17 at the $125 strike price could be bought for $9. For that trade to be profitable, AAPL need only rise above $134 by the expiration date.

Bear in mind, AAPL traded at that price as recently as May 3. In short, what the options market is telling us is that it does not think the stock will appreciate more than 5% over the next four months.

In truth, the stock never has to make it that far for this trade to be profitable. It only needs to appear as if it will make it for the option premium to rise above our acquisition cost.

That is what is known as “time premium,” and at the moment there isn’t much time premium priced into Apple call options. A third of the $9 premium is “intrinsic value,” which is the extent to which the current price of the stock exceeds the strike price.

That means there is only $6 of time premium, which for a stock like Apple is quite modest. There was a time not that long ago when AAPL would have been expected to move that far in a single month.

But the threat of inflation has reduced expectations to the point that even Apple has to prove it can thrive in this new economic environment. I think it can, and buying call options on Apple may prove to be one of the best ways to profit from overblown inflation concerns.

Jim has developed a proprietary investing method that consistently beats Wall Street at its own game, in markets that are going up, down or sideways. His 310F trade is the most accurate way I’ve ever seen to double your stake in just three days.