Sure, stock market valuations exceed historical averages, but the market can persist in this manner for some time. You’ll recall that in late 1996, then-Federal Reserve Chief Alan Greenspan famously chastised investors for their “irrational exuberance.” However, it took another three-plus years for the bull market to finally peak.

What’s more, the dot.com bust of 2000 was triggered by the collapse of overly hyped technology companies with little or no earnings. You can’t make that argument today about Silicon Valley, which is fat with cash and remains positioned for even greater profits down the road in the post-COVID economy.

In light of robust corporate earnings growth and the accelerating economic recovery, stock market appreciation over the past year seems, if anything, rational. It’s also encouraging that the U.S. last week reported the lowest number of new COVID-19 cases since June 2020, according to Johns Hopkins.

On Tuesday, stocks took a breather from their winning streak. The Dow Jones Industrial Average fell 81.52 points (-0.24%), the S&P 500 shed 8.92 points (-0.21%), and the tech-intensive NASDAQ fell 4.00 points (-0.03%). In pre-market futures trading Wednesday, all three U.S. indices were trading in the green amid subsiding inflation fears and slipping bond yields. 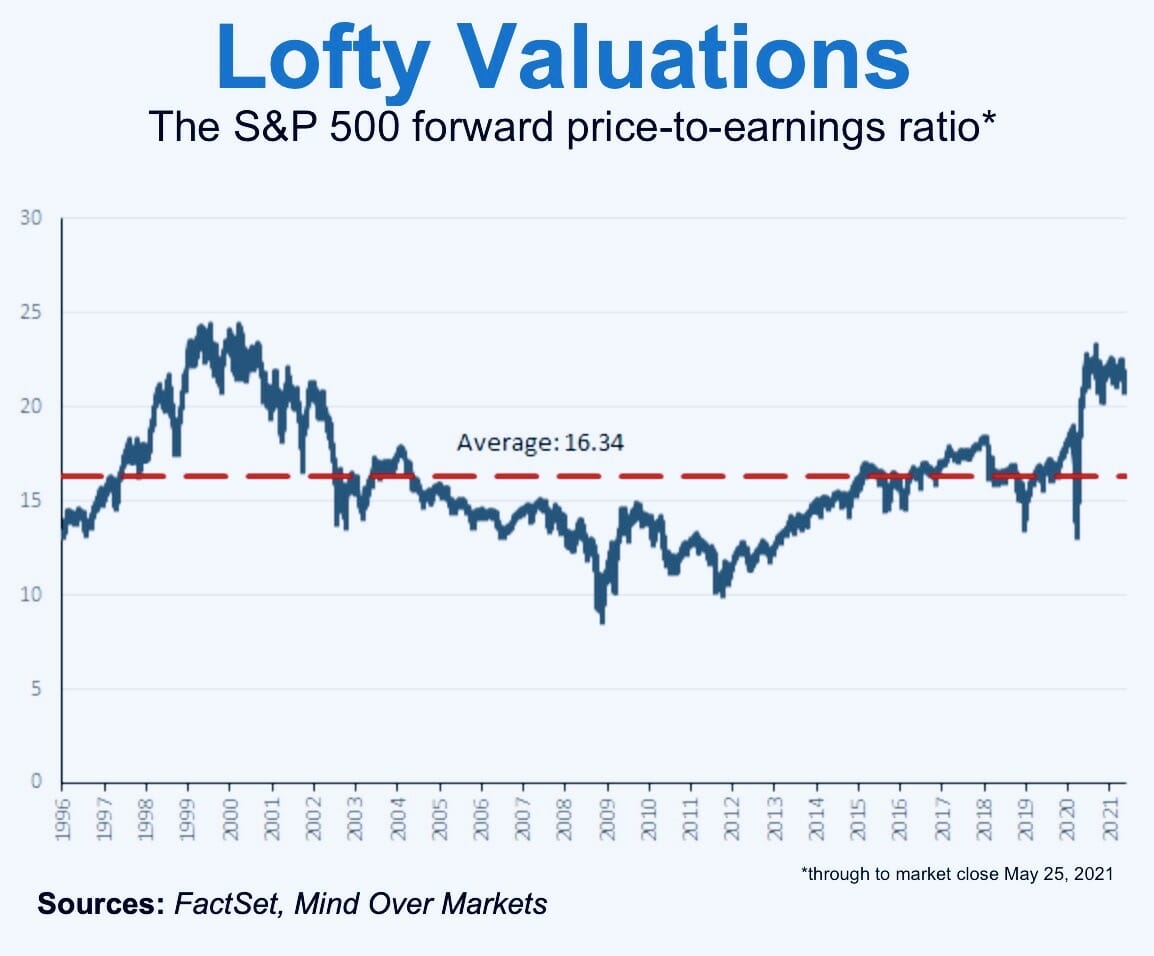 However, high valuations alone aren’t sufficient to trigger a stock market downturn. They should be viewed within the context of corporate profitability. The S&P 500 rose 75% during the first 12 months of the economic recovery, pricing in expectations for a resurgence in corporate profits. Those expectations have not been disappointed. In fact, they’ve been exceeded.

Quarterly corporate earnings growth has been coming in strong, so I expect P/E ratios to decline as earnings rise. During bull markets since 1929, valuations tend to rapidly rise in the first year of the rally then fall to a more sustainable level as earnings growth gathers steam.

Surprises on the upside…

Among S&P 500 companies reporting for Q1, 86% have reported actual earnings above estimates, which is above the five-year average of 74%.

The net profit margin for the S&P 500 for Q1 2021 is 12.8%, which exceeds the five-year average of 10.6% and the year-ago net profit margin of 9.3%. Historically low interest rates also help justify the market having a higher P/E ratio than its long-term average.

Another historical parallel: In 2004, equities and the housing market were thriving on low interest rates. However, Greenspan was worried about inflation, even though it was only modest at the time. In the middle of that year, he started to hike the fed funds rate. Ruh-roh. What ensued was the meltdown of the subprime housing market, in turn precipitating the 2007-2008 financial crisis and great recession, with concomitant stock market crash.

But Jerome Powell is no Alan Greenspan.

Powell has no intention of following Greenspan’s blunder of wrecking the economy, by raising interest rates at the wrong time. The Fed under Powell has vowed to stay pat with its dovish stance, even amid (temporary) inflationary spikes. Meanwhile, economic growth for the U.S. is expected to come in at between 6% and 7%, whereas the world’s second-largest economy, China, is projected to rack up a remarkable growth rate of 8.2%.

Watch This Video: Investing Without Boundaries

China-based companies in the industrial and technology sectors should prosper in 2021 and beyond. China’s containment of the coronavirus pandemic is a strong factor in favor of its economy.

When stocks march higher in the face of geopolitical and economic dangers, they’re proving an old Wall Street adage: stocks climb walls of worry. This expression refers to the stock market’s tendency to climb when investor fears don’t materialize. During this pandemic-fraught year, stocks have climbed that wall, brick by brick.

The S&P 500 currently hovers near record highs, but I still discern pockets of undervaluation in the market. That’s where you should pounce. Specifically, the financials and energy sectors appear attractively valued, especially regional banks and midstream assets.

According to the consensus of Wall Street analysts, the S&P 500 is on track for price appreciation of 14% over the next 12 months. Stay invested, but remain prudent. I suggest you add hedges such as gold for insurance.

But maybe you’re looking for investments that make money regardless of metrics such as equity valuations or inflation rates? Consider the trading techniques of my colleague Jim Fink, chief investment strategist of Velocity Trader.

Jim has developed a proprietary investing method that consistently beats Wall Street at its own game, in markets that are going up, down or sideways. His 310F trade is the most accurate way I’ve ever seen to double your stake in just three days.

Want to learn about Jim Fink’s next trades? Click here for details.