Investment Hindsight: Lessons of The Past 20 Years

I turn 62 next week. That means I can begin taking my early Social Security benefit if I so desire. I won’t do that for two reasons. First, I am gainfully employed so I don’t need the money. Second, the longer I wait to start taking my benefits, the higher the monthly amount becomes.

According to the Social Security Administration, a person born in 1959 would have their monthly benefit reduced by 29% by starting benefits at age 62 instead of at full retirement age of 66 years and 10 months.

Of course, I could receive those reduced benefits for up to an extra 58 months by starting early. So, I’d have to live a pretty long time for the benefit of waiting to be worth more.

By my estimation, the breakeven age is around age 82. If I die before then, I’d be better off taking the money now.

But like I said, I don’t need it now. And since I am currently employed, I’d pay more in taxes on it now than I would in retirement.

However, it’s reassuring to know I have that option available to me if I need it. But for now, I am going to hold off on taking my Social Security benefit.

That is an easy decision to make. But as I look back over the past 20 years, there are other decisions that I wish I could do over. If I could, I’d write a letter to my past self to make one decision over again.

You will be glad to know that 20 years from now you are very much alive and in good health. So are your wife (the same one you have now) and children (ditto).

You should also be happy to learn that you are in solid financial shape. You got your kids through college without having to take out loans and they now have good jobs that pay well.

You made a lot of smart decisions, but you could have done even better. It is for that reason that I hope you pay close attention to what I am about to say.

I know this may seem hard to believe, but pretty soon you (and everybody else in the world) will be carrying a portable phone around in your pocket. Not only will you be able to call just about anyone in the world from almost anywhere in the world, but it will be able to do anything that the PC sitting on your office desk can do.

I know what you’re thinking; sounds pretty crazy, right? But I swear it’s true, and there is no one thing you can do right now that will more than satisfy all of your financial needs in retirement.

Today, I want you to take all of the money in your IRA and buy shares of Apple (NSDQ: AAPL). I know it’s a company with a silly name, but it is about to go gangbusters!

P.S. If you do me this one favor I promise I will never bother you again!

Regrettably, I did not buy Apple 20 years ago. I did buy it six years ago and made a very nice profit, but nowhere near what I could have made if I had bought it a lot earlier.

As ridiculous as that letter may seem, every word of it is true. Apple really has returned over 40,000% over the past 20 years despite the occasional setback. 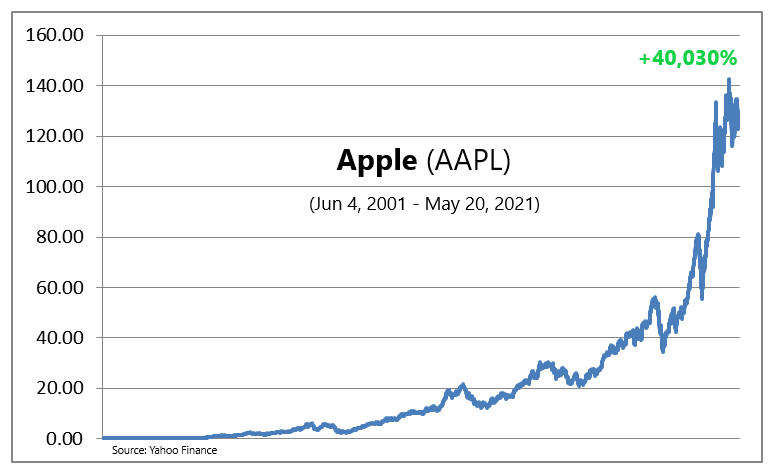 If you’re thinking that I cherry-picked a point in time that happened to coincide with the beginning of Apple’s rapid ascent up the charts, consider this. On June 4, 2001, AAPL was trading at 32 cents a share (split and dividend-adjusted).

Thirteen months later, AAPL was trading for 21 cents. A year after that, its share price was back up to 32 cents.

Had you bailed out of Apple after one year, you would have lost a third of your money. Even worse, you would have missed out on one of the greatest investment opportunities of your lifetime.

That’s why having a proven system and sticking with it is critical to long-term investment success. That’s where my colleague Jim Fink comes in.

As chief investment strategist of Velocity Trader, Jim has developed a proprietary investing method that consistently beats Wall Street at its own game, in markets that are going up, down or sideways. His 310F trade is the most accurate way I’ve ever seen to double your stake in just three days.