VIDEO: Stocks and Earnings Get in Synch

Welcome to my video presentation for Tuesday, June 1. For a deeper dive into these themes, read my article below.

With nearly all S&P 500 companies having already posted first-quarter 2021 operating results, earnings per share (EPS) have risen on a year-over-year basis by 51%, the fastest pace since 2010. 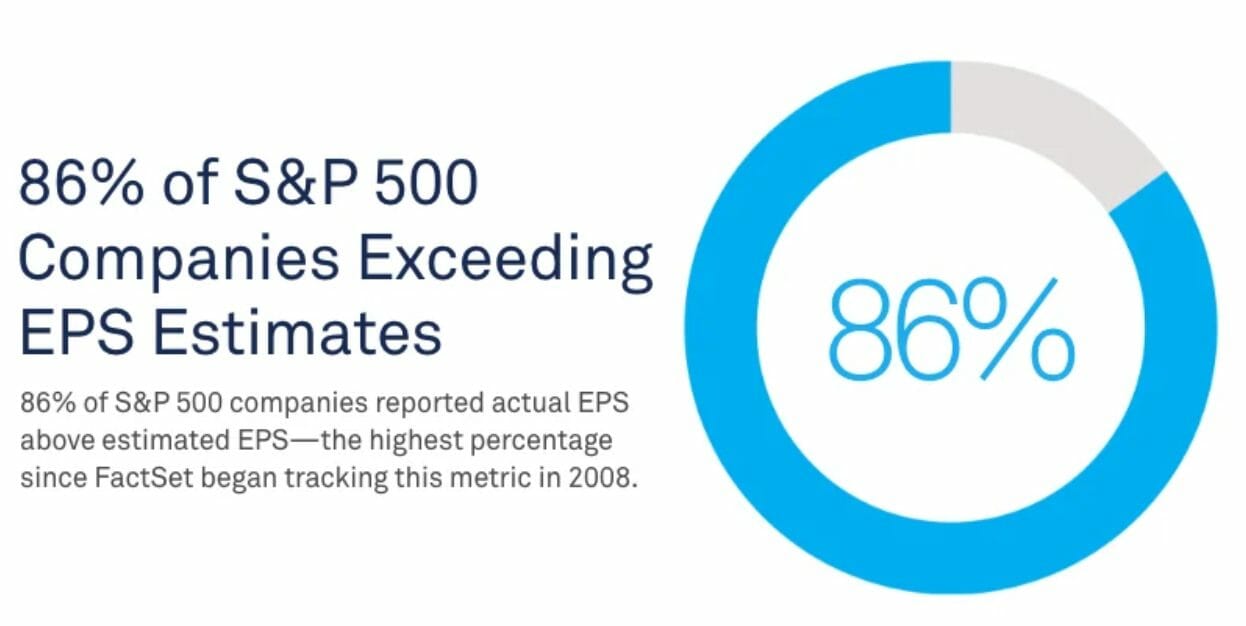 That level of surprises on the upside marks the highest percentage of S&P 500 companies reporting an EPS beat since FactSet began tracking this metric in 2008.

Not only has a bigger percentage of companies topped EPS projections on an historical basis, but actual results also have surpassed the consensus projections of analysts by a record 23%. Consequently, analysts have continued to raise their estimates, with full-year 2021 corporate earnings now projected to grow (year-over-year) by 34% from 22% at the start of the year. 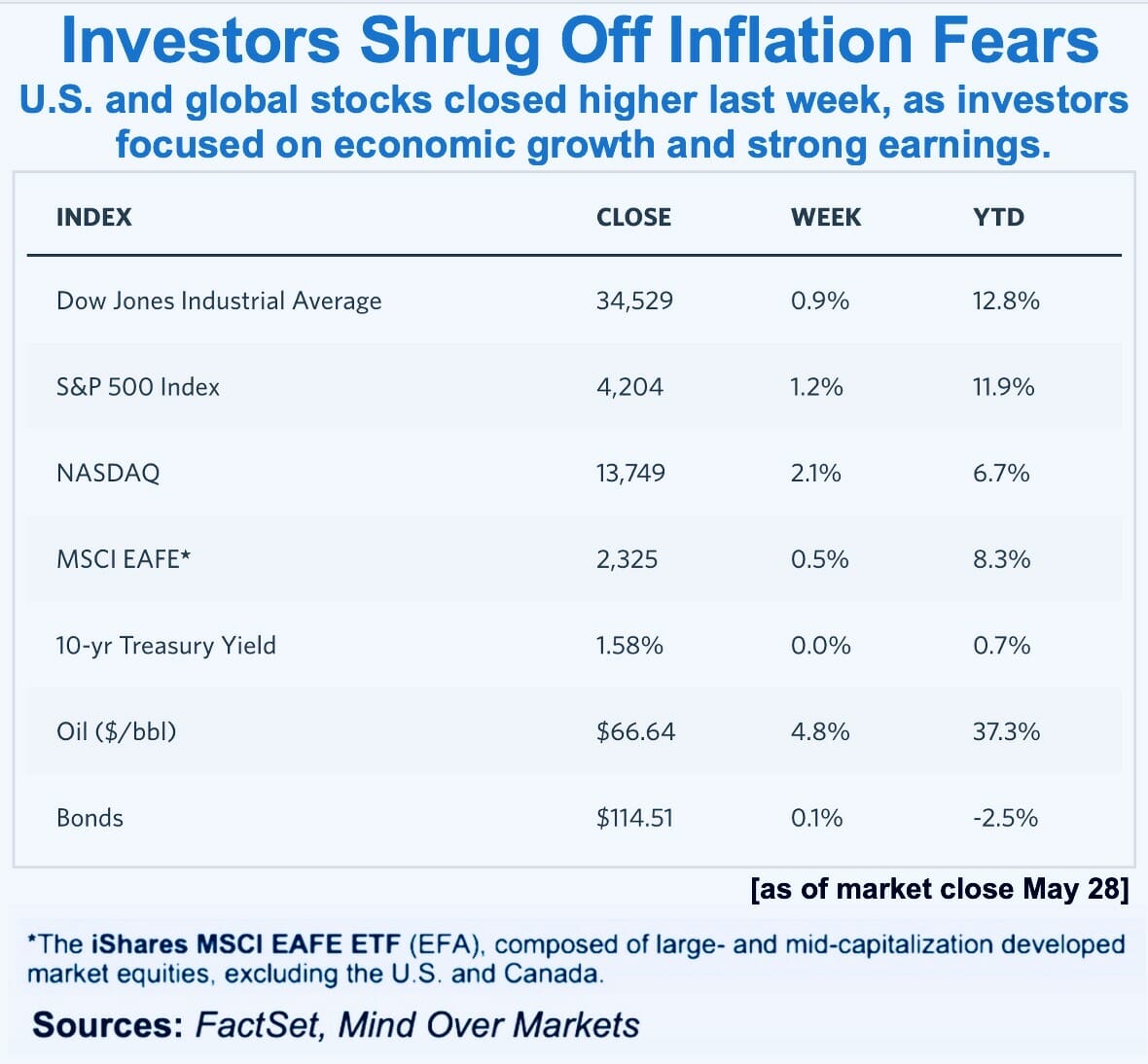 Oil prices also finished the week higher, a bullish sign that economic growth is sustainable. After cratering last year because of the pandemic, energy demand has come roaring back and crude’s price per barrel currently exceeds $66.

In pre-market futures trading on June 1, all three main U.S stock indices were trading significantly higher, after posting gains for the month of May.

Last week, stocks were buoyed by robust consumer spending data, suggesting that not only is the economy recovering but shoppers this summer will probably dip into their substantial household savings. The retail sector is poised to take off, as Americans get ready to indulge in a spending spree.

The travel sector is rebounding as well. The Memorial Day weekend, which just ended, traditionally marks the start of the busy summer travel season. This season, the battered travel, hospitality and leisure industries are expecting a frenzy of activity after one of their worst downturns in history.

Some analysts are sounding the alarm about high equity valuations, but the fact is, stock market appreciation and corporate earnings performance are increasingly in synch.

Earnings are exceeding consensus expectations, but to me, a salient statistic is the jump in profit margins. The profit margin is a key factor in determining a company’s financial health and staying power. 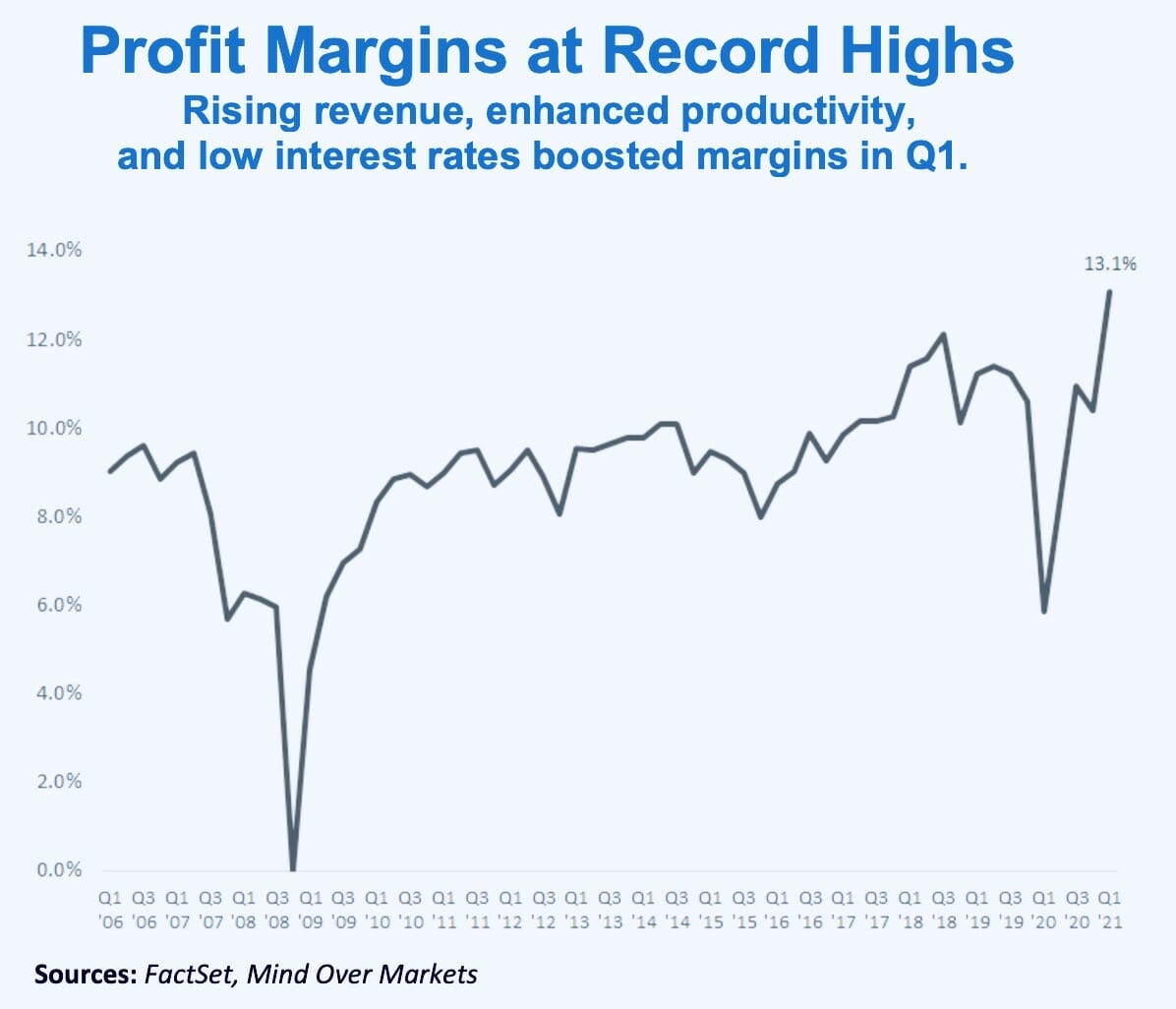 When companies have high margins, they also have cushions to withstand tougher times and unexpected shocks. It seems that so far, companies have been able to pass along higher input costs to consumers without significant push-back.

We’ll see if this dynamic holds up in the coming months, as the prices of commodities and inputs rise in tandem with economic growth.

Under these conditions, cyclical companies are especially appealing investments. This equation could change, of course, if the recovery suddenly takes a turn for the worse. We could witness setbacks in fighting the pandemic, or the Federal Reserve could hike rates sooner than expected. I don’t expect these negative scenarios to occur, but you should be prepared.

If you’re looking for an investment opportunity that transcends these aforementioned risks, consider one of the hottest commodities on the planet right now: lithium.

Lithium is a silver-white metal used to create heat-resistant glass, ceramics and lubricants. It’s also used in a variety of industrial applications, such as steel and aluminum production. In the field of drug treatment, it’s widely used to alleviate depression and bio-polar disorder.

However, the biggest growth driver for lithium is the burgeoning demand for lithium-ion batteries used in electric vehicles (EVs).

Demand is exploding for EVs and they can’t function without lithium batteries. In fact, the strategists at Goldman Sachs (NYSE: GS) call lithium “the new gasoline.” The looming shortage of lithium should boost prices of the metal and provide a windfall for the companies that mine and process it.

The lithium boom is part of a commodities super-cycle that will see prices of raw materials soar this year and beyond. For details about America’s number one lithium play, click here now.