While attending grades 9-12 in the early 1970s, my peers and I were subjected to a steady barrage of propaganda about the evils of marijuana.

Cheech & Chong were at the height of their popularity and they perpetuated the stoner stereotype. If you smoked pot, you’d get addicted and spend most of your time on the couch in your mom’s basement, watching television re-runs while munching Doritos. Cannabis made you a loser.

Even today, the marijuana prohibitionists keep dusting off that narrative in their implacable opposition to legalization efforts on the federal and state levels. As legalization picks up steam, the anti-weed histrionics are becoming even more intense.

There are 1,152 cannabis, psychedelics and drug policy bills in state legislatures and Congress for 2021 sessions. Now that the Memorial Day holiday is behind us, at least eight marijuana and drug reform bills are scheduled for committee hearings this week in Congress. As they rise up to fight these efforts, legalization opponents frequently allege that lifting restrictions on pot will corrupt our youth.

But the facts suggest otherwise. The latest empirical data show that kids are actually indifferent to marijuana, even as the substance becomes increasingly legal.

During the government’s War on Drugs, the infamous mantra of First Lady Nancy Reagan was: “Just say no.”

Fast forward from the 1980s to 2021. Sociologists currently point out that marijuana has lost its mystique as a tool of rebellion. Many kids know that their parents and other authority figures routinely consume pot, in mundane and responsible settings.

When grandma is observed eating cannabis gummies to alleviate her arthritis, a lot of kids are looking at marijuana and they’re just saying: Meh.

A new federal government report, updated and released in May 2021, is the latest challenge to the hackneyed notion that state-level marijuana legalization causes greater use among America’s youth.

The U.S. Department of Education’s National Center for Education Statistics (NCES) analyzed youth surveys of high school students from 2009 to 2019 and concluded that there’s been “no measurable difference” in the percentage of those in grades 9-12 who reported consuming cannabis at least once in the past 30 days.

The report, which uses data from the Youth Risk Behavior Surveillance System, also found that access remained stable during that time period, with no statistically significant changes in the percentage of youth who say they’ve been offered, sold or gifted illegal drugs on school grounds in the previous 30 days (see chart). 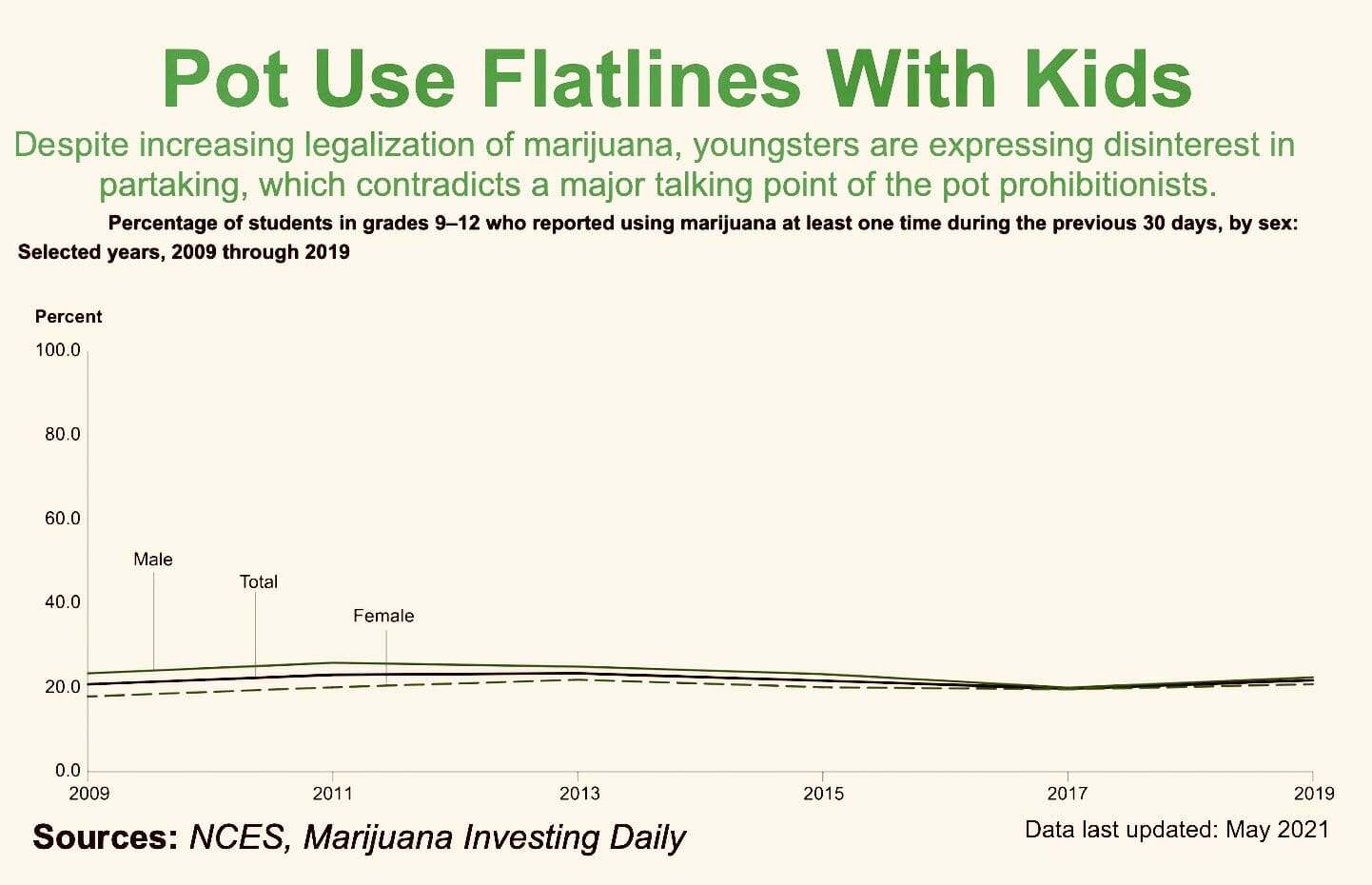 One assertion among marijuana opponents is that the celebrity use of weed is leading youngsters astray. These high-profile influencers are supposedly acting as Pied Pipers to get kids hooked on the devil’s weed.

Read This Story: Rappers, IPOs and Marijuana: The Blunt Facts

However, there’s zero evidence that the increasing presence of marijuana in the entertainment industry is brainwashing young kids into embracing pot.

For me, the most salient aspect of the NCES report is the time frame. There were no recreational markets in 2009, and that year, 21% of high school students reported past 30-day use. The first legal sales in the U.S. began in Colorado in 2014. Five years later, 22% of teens said they’d recently used marijuana.

NCES noted in its report: [“There was] no measurable difference between 2009 and 2019 in the percentage of students who reported that illegal drugs were made available to them on school property.”

That point has been underscored by previous studies. Notably, the Centers for Disease Control and Prevention recently found that marijuana consumption among high school students declined during the peak years of state-legal recreational cannabis legalization.

The study used data from national and state Youth Risk Behavior Surveys from 1993 to 2017. The study found that recreational marijuana laws were associated with an 8% decrease in the likelihood of teens trying marijuana as well as a 9% reduction in the odds of frequent marijuana use. At the same time, medical marijuana laws had no noticeable effect on marijuana use among teens.

To reiterate, marijuana legalization resulted in a decrease, not an increase, of pot use among kids. As is so often the case, the facts contradicted a political talking point.

The theme of this particular article isn’t that kids should smoke pot. Rather, it’s to make it clear that legalization does not encourage pot use among kids. This fact destroys a main argument used by those who want to keep marijuana illegal.

Looking for ways to profit from the mainstreaming of cannabis? Click here for our free report.