Over the past several months, I have warned of the proliferation of exotic investment strategies. They could prove disastrous when the stock market finally cools off. In fact, that may already be happening. Trading activity in cryptocurrencies, special purpose acquisition companies (SPACs), and you only live once (YOLO) stocks is beginning to wane resulting in wide fluctuations in value from one day to the next.

However, do not confuse superficial attempts to create the perception of value with legitimate business decisions that really do create value. While Wall Street’s attention has been diverted by the siren’s call of quick profits, a more substantial development has been quietly taking place that could produce big gains for years to come: The restructuring of horizontally integrated conglomerates into more narrowly focused businesses.

Consider the impending split-up of International Business Machines (NYSE: IBM) into two separate businesses. Later this year, IBM will spin off its legacy infrastructure services business into a new publicly traded entity (“NewCo”). It will retain its hybrid cloud and artificial intelligence business units, which have higher profit margins and bigger growth potential than does the services group.

According to Arvind Krishan, IBM’s Chief Executive Officer, “As two independent companies, IBM and NewCo will capitalize on their respective strengths. IBM will accelerate clients’ digital transformation journeys, and NewCo will accelerate clients’ infrastructure modernization efforts. This focus will result in greater value, increased innovation, and faster execution for our clients.”

That statement could have also been made by telecom giant AT&T (NYSE: T). Sometime next year, AT&T will spin-off its WarnerMedia division into another entity so it can devote more of its resources to its fast-growing 5G (fifth-generation) wireless technology business. After years of attempting to buy its way to growth, the company is focusing on organic growth of its highest-margin business units as the key to long-term profitability.

I agree with AT&T’s decision to slim down in order to grow up, but I have misgivings about the most recent corporate restructuring event by Marathon Petroleum (NYSE: MPC). Last month, Marathon consummated the sale of its Speedway retail operations, so it can almost exclusively function as an oil refiner. That’s a great business to be in while demand for gasoline is rising and crude oil prices are falling, but it can quickly turn unprofitable when the reverse is true.

We may see a similar restructuring event out of Western Digital (NSDQ: WDC) announced soon. Similar to IBM, Western Digital is essentially two businesses wrapped into one. One unit (flash memory for portable devices) enjoys growing demand for its products and expanding margins, while the other unit (hard disk drives for PCs and mainframes) generates a lot of cash flow but has narrow margins and flat demand.

In each case, the company concluded that it could no longer sustain the costs associated with running multiple businesses that provide few synergies. That has not been a major problem while the cost of borrowing has been low, but will become increasingly burdensome when interest rates rise in the future. In short, the greater expense of carrying the debt necessary to finance low-margin business has triggered a wave of corporate restructurings.

I expect to see the pace of corporate restructurings accelerate over the remainder of this year. The stock market tends to reward these actions by assigning a higher combined value to the separate businesses than when they were a single company.

That means some of these undervalued assets should appreciate significantly once they begin trading on their own merits. The good news is you don’t have to try to figure out who they are. There is an exchange-traded fund (ETF) designed specifically for that purpose.

The fund’s name is the Invesco S&P Spin-Off ETF (CSD) and it has been around for 10 years. The fund tracks the S&P Spin-Off Index, which is composed of companies that have been spun off from larger corporations within the past four years. After losing half its value during the first three months of last year, the fund has nearly tripled in value. 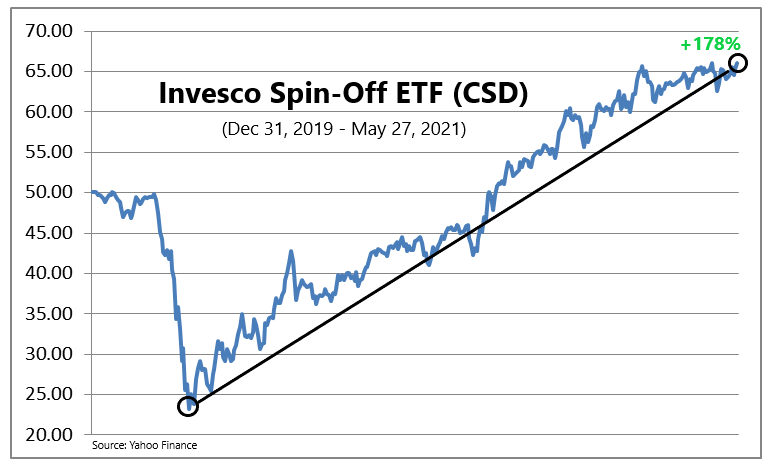 The fund’s top three holdings are companies you might not have heard of: Otis Worldwide (NYSE: OTIS), Corteva (NYSE: CTVA), and Carrier Global (NYSE: CARR). The stock market mostly ignored these businesses while they were part of a bigger entity but has since recognized their inherent value.

Buying stocks such as those is the sort of “below the radar” investing that can generate huge profits. But I know of a better, even safer way to score consistent gains in all types of market environments.

My colleague Jim Fink, chief investment strategist of Velocity Trader, has developed a proprietary investing method that consistently beats Wall Street at its own game, in markets that are going up, down or sideways. His “310F” trade is the most accurate way I’ve ever seen to double your stake in just three days. Want to learn about Jim Fink’s next trades? Click here for details.