To COVID Hell and Back

Over the past Memorial Day holiday, the usual slew of war movies appeared on television. While the markets were closed Monday, I was watching “To Hell and Back” (1955), starring WWII hero Audie Murphy as himself, when it hit me that the title also applies to our ordeal as investors during the coronavirus pandemic.

In the second quarter of 2020, we experienced three months of sheer hell. Then, against the odds, we came back to gun-blazing glory.

As I explain below, I think the bull market has further to run this year. I also pinpoint a specific profitable play on current conditions that you probably haven’t considered.

I’m not troubled by the recent uptick in inflation. The economy is like a traumatized soldier; inflation is a sign that the patient is healing.

Of course, if inflation rises too sharply and stays elevated for a prolonged period of time, that’s a big problem. But considering the persistent slack in the labor force and the lingering uncertainties of the pandemic, most economists don’t expect runaway inflation this year.

The rebound’s momentum has been unexpectedly powerful. U.S. gross domestic product (GDP) increased at an annual rate of 6.4% in the first quarter of 2021, according to the Bureau of Economic Analysis (BEA). That’s the fastest rate of year-over-year GDP growth since 1984, during the much-ballyhooed “Reagan boom.”

The BEA currently expects the second quarter in the U.S. to grow at a pace of 10%, with growth for 2021 to come in between 6% and 7%. In its May 2021 report, the Organisation of Economic Cooperation and Development estimated that the global economy would grow 5.8% in 2021.

For the return to economic health, we mostly have fiscal and monetary stimulus to thank. To be sure, the comparative year-over-year baseline is especially low because of the severity of pandemic-induced economic damage, but optimistic projections extend into 2022 as well.

Memories tend to be short, so here’s a quick reminder of what we faced last year. U.S. GDP in Q2 2020 shrank at an annual rate of 32.9%. The economic shock in April, May and June was nearly four times the worst quarter during the Great Recession.

The 36% plunge in the S&P 500 index in February and March of 2020 was the fastest and worst decline I’ve witnessed in my lifetime. Now that the economy and stock market are back on their feet, the scaremongers (who are motivated by partisanship, not the facts) are absurdly warning of a return to 1970s-style inflation.

Seventies hyperinflation is as likely to make a comeback as polyester leisure suits. But more to the point, a modicum of inflation caused by stimulus is preferable to economic collapse, massive unemployment, and a bear market.

That said, stocks wobbled Tuesday as investors worried anew that the Federal Reserve would be compelled to hike rates to rein in the fast-growing economy.

The first trading day of June was volatile and ended mixed. The Dow Jones Industrial Average rose 45.86 points (+0.13%), the S&P 500 fell 2.07 points (-0.05%), and the tech-heavy NASDAQ declined 12.26 points (-0.09%). However, as of this writing after the opening bell on Wednesday, all three indices were trading in the green, with the Dow on track for its fifth straight consecutive gain.

To be sure, investors shouldn’t get complacent and prematurely declare the pandemic over. The virus, as well as the economy, could still have nasty surprises in store. Cyberattacks, such as those that clobbered the Colonial Pipeline and meat processor JBS, tend to temporarily roil the markets. That’s why you should pay close attention to forthcoming economic reports.

In the coming days, crucial economic data is on the docket that have the power to move markets and steer the direction of stocks for the next few months (see table). 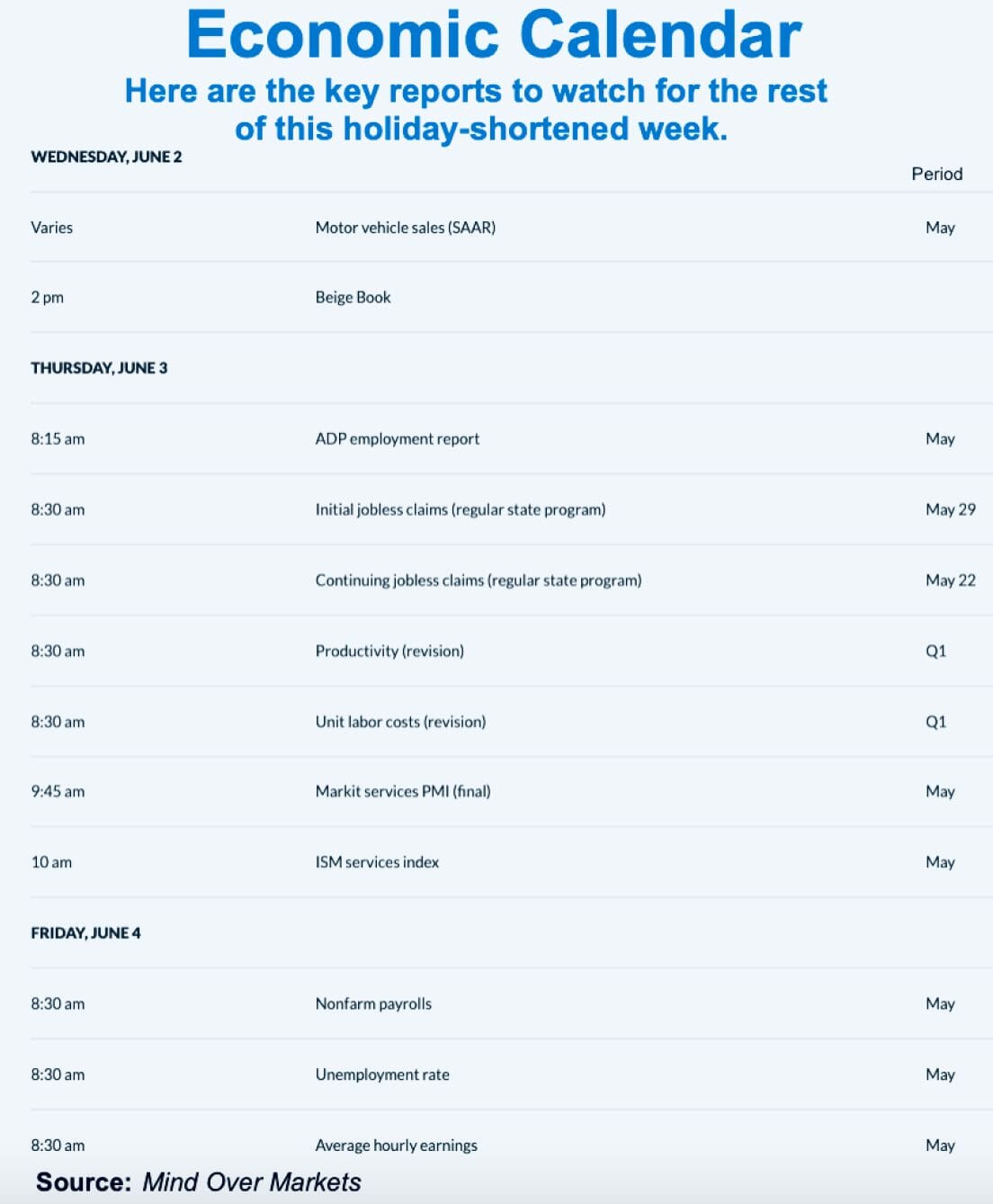 The numbers are generally expected to be positive, but as we witnessed from last April’s consumer price index report, a negative surprise is just a headline away.

Economic data this week will tell us whether the economic recovery is quickening or starting to sputter. Unless the numbers greatly disappoint, the most appealing investment sectors for 2021 are economically sensitive, e.g. energy, financials, consumer discretionary, and commodities.

The highly cyclical auto industry also warrants your attention, especially auto makers that are heavily investing in the new frontier of electric vehicles (EVs). Auto equities are under pressure because of supply bottlenecks of crucial inputs, especially computer chips, as just-in-time inventory systems remain out of whack because of the pandemic. Most of these vital chips are made in Asia.

It was the auto industry that invented just-in-time inventory and now it’s proving a double-edged sword. Take a look at the following chart. 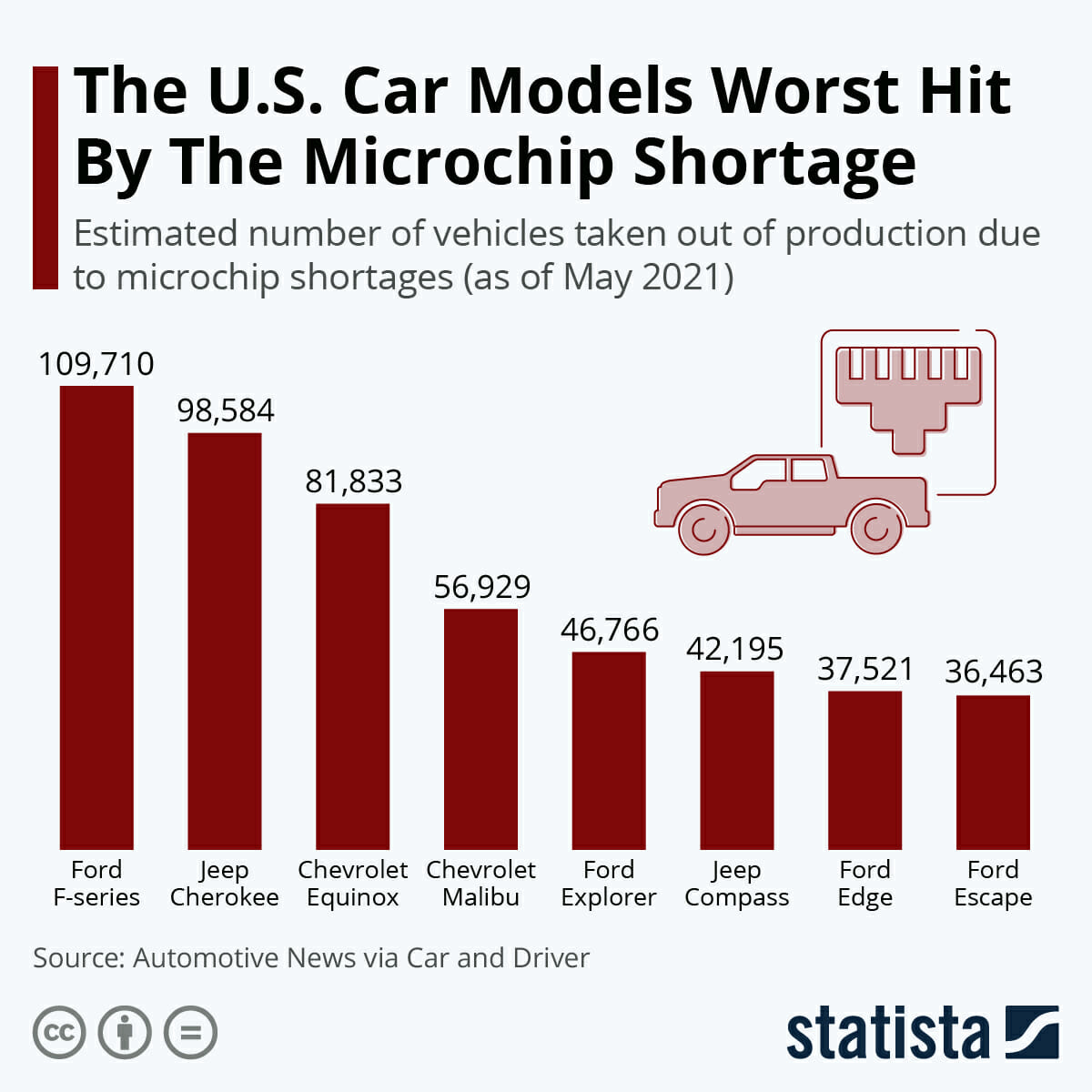 Supply chain disruptions have been a major factor behind the recent rise of inflation, but I expect these anomalies to soon get sorted out. When supplies start reaching their intended destinations, inflation should moderate and auto industry equities rebound.

Read This Story: The Shrewd Way to Play EVs

Which brings me to one of the hottest commodities on the planet right now: lithium.

Lithium is a silver-white metal used to create heat-resistant glass, ceramics and lubricants. It’s also used in a variety of industrial applications, such as steel and aluminum production.

The biggest growth driver for lithium is the demand for lithium-ion batteries used in EVs. Some pundits refer to lithium as “the new gasoline.” Renewable energy also requires a massive amount of lithium.

However, demand for lithium is outstripping supply, which is great news for the companies that mine and process the metal. For details about America’s number one lithium play, click here now.