Another day, another security breach. News reports surfaced this week that the world’s largest meat processor, Brazil-based JBS S.A. (OTC: JBSAY), was the victim of a cyberattack, throwing into chaos the global supply of beef, pork, and poultry. Price increases for meat are likely, just as the busy summer grilling season gets underway.

JBS management believes that the ransomware attack against its global infrastructure originated from a criminal group based in (you guessed it) Russia. Although he denies it, President Vladimir Putin has been known to harbor and encourage these bad actors. Welcome to Cold War II, in which the battle isn’t fought with bullets and bombs but with bits and bytes.

The JBS meat supply disruption comes on the heels of a cyberattack in May against the Colonial Pipeline, which carries fuel from Texas to the East Coast. Colonial ponied up $4.4 million in ransomware to get the pipeline operational again.

As a citizen, you’re right to be alarmed at the relentless threat posed by cybercrime. But as a dispassionate investor, you should be salivating at the huge investment opportunities for long-term profits.

Below, I pinpoint two investments that are poised to reap outsized spoils in the ceaseless war against cybercrime: FireEye (NSDQ: FEYE) and PureFunds ISE Cyber Security ETF (HACK).

There’s been an epidemic of cybercrime and financial fraud and with it, the emergence of an industry to combat it.

Read This Story: Lessons Learned from the Bernie Madoff Swindle

It’s not just corporations and governments. Individuals are increasingly under assault by cyber crooks, in a variety of ways (see chart): 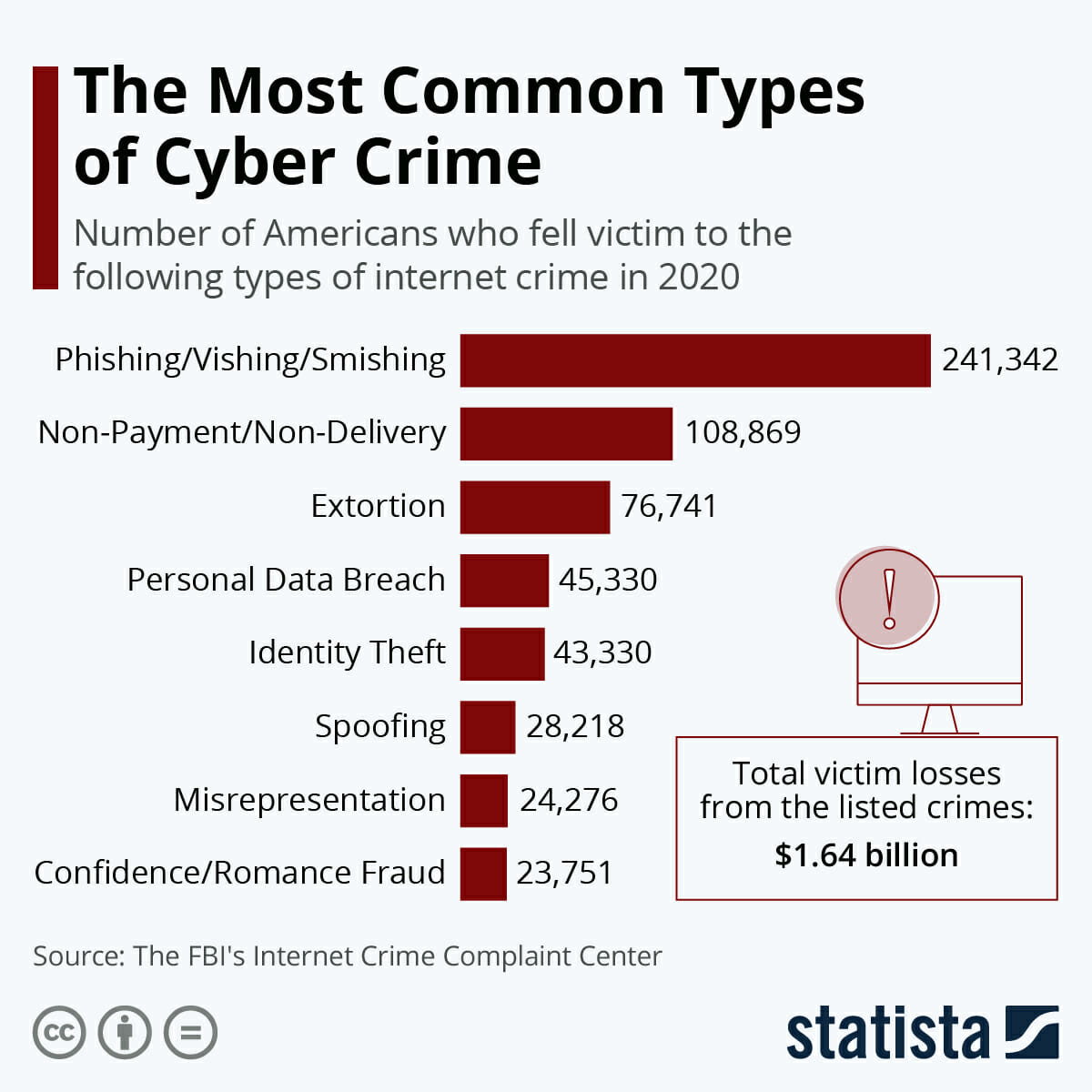 Fact is, in our fiber-optically connected world, in which reality is defined by certain permutations of 1s and 0s, cybercrime is a persistent and all-pervasive problem.

The U.S. continually accuses China of hack­ing the computer systems of American military and media organizations; South Korea is pointing the finger at North Korea for similar provocations; and large retail stores regularly report massive cyber breaches. U.S. financial institutions have reported sustained attacks from hackers located in Eastern Europe. The list goes on and on.

Through it all, Russian state-sanctioned hackers continue to disrupt American elections, starting with the 2016 presidential general election and continuing into the 2020 contest and beyond.

According to a recent report from McAfee, the global price tag for cybercrime (against both individuals and corporations) exceeds $1 trillion annually, in the form of fraud, theft, repairs, and loss.

In various speeches, President Biden has made the fight against cybercrime a national priority. Let’s look at two beneficiaries of the trend: a publicly traded company and an exchange-traded fund.

FireEye also offers threat intelligence subscriptions, such as its Dynamic Threat Intelligence cloud-based service, as well as FireEye Threat Intelligence, both of which enable organizations to defend against new and emerging cyber threats before an attack is launched.

The company also is adept at forging new partnerships and acquisitions to expand its cloud portfolio and on-demand services. The company has been gobbling up smaller entrepreneurial companies and then integrating their innovation into its cyber security offerings.

FireEye’s security solutions ward off attempted breaches of firewalls, virtual private networks and wide area networks. FireEye’s products are familiar and trusted brand names to anyone in the IT field.

FireEye’s distribution network extends throughout the U.S., Asia Pacific, Europe, the Middle East, Africa, and other regions. Clients encompass the consumer and aerospace/defense sectors. American intelligence agencies are deep-pocketed FireEye clients that are set to receive significantly higher funding in the Biden era.

FireEye announced Wednesday an agreement to sell portions of its legacy hardware business for $1.2 billion in cash to a consortium led by the private equity firm Symphony Technology Group.

This transaction strengthens the thesis to buy FireEye stock. The company will be left with its higher-margin Mandiant business, which grew 20.6% year over year to $399.7 million in 2020. Mandiant is the brand name for the company’s consultancy, software, and services segment.

With a market cap of $5.3 billion and based in Milpitas, California (the heart of Silicon Valley), FireEye is a mid-cap player in a year when smaller companies are outperforming their larger brethren.

FireEye’s mid-cap status is a major plus. A mid-cap stock has a stock market capitalization of $2 billion – $10 billion. These “Goldilocks” companies aren’t too big, nor too small. They’re just the right size to grow earnings at a market-beating but sustainable pace.

Aside from its innovative and increasingly popular products, FireEye offers another enticement: scuttlebutt is growing that cash-rich tech titans such as Cisco Systems (NSDQ: CSCO) or International Business Machines (NYSE: IBM) could buy-out the company.

The average analyst expectation is that FireEye will rack up year-over-year earnings growth of 29% this year and 17.5% next year. Over the next five years, earnings are expected to come in at a whopping 91.30% on an annualized basis.

The perpetual fight against cybercrime is the sort of inexorable trend on which long-term investors should focus. However, if you’re concerned about market volatility in 2021, there’s one investment that allows you to profit from the growing problem of cybercrime, with less risk: PureFunds ISE Cyber Security ETF.

HACK has returned 1.66% year to date, 28.16% over the past 12 months, and 16.60% over the past three years. HACK offers less growth potential than FireEye, but it’s also a safer and less volatile alternative for risk-averse investors.

Cyberattacks, geopolitical turmoil, rising inflation, and the persistent pandemic have propelled the price of gold in recent months. Gold probably has further to run.

The rule of thumb is for a portfolio allocation of 5%-10% in either gold mining stocks, ETFs, or the physical bullion itself. To learn about our favorite gold play, click here for details.