The Bull Run Still Has Legs

Dr. Sigmund Freud, the father of psychoanalysis, was once asked if his omnipresent cigar symbolically represented a phallus. Freud famously responded: “Sometimes, a cigar is just a cigar.”

And as a financial analyst, I can assure you that sometimes, good news is just…good news.

Last week’s May employment report showed that jobs growth in the U.S. is picking up, with the headline unemployment rate now at its lowest since the coronavirus pandemic began.

My view: I’m grateful that we even have a glass. Last year, the global economy nearly collapsed into a full-blown depression. Good news on the labor front right now should be embraced as a positive. Don’t let the “nervous Nellies” chase you away from the stock market. The bull run still has legs.

The U.S. Labor Department released its May jobs report Friday morning, showing that 559,000 new non-farm jobs (compared to 675,000 expected) were added to the economy, bringing the headline unemployment rate down from 6.1% in April to 5.8% last month, a pandemic-era low (see chart). 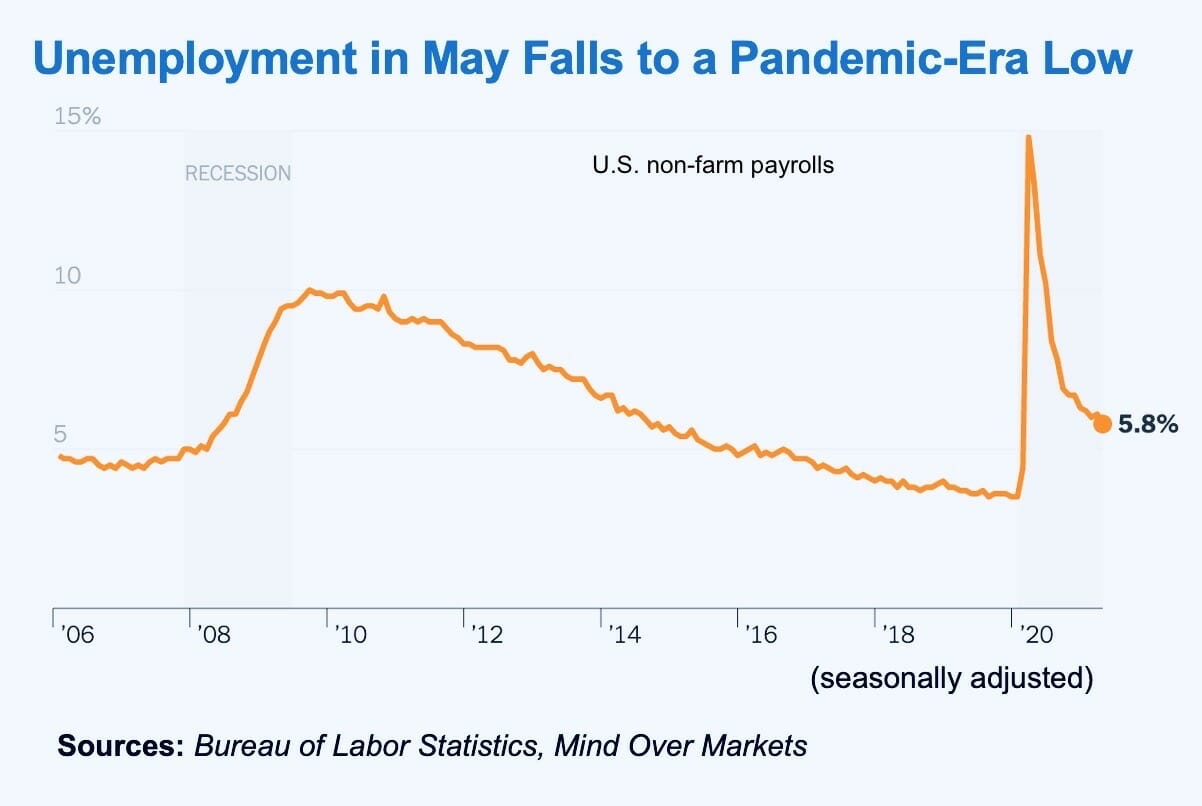 To be sure, there’s a disconnect between the supply of workers and the demand for labor. With 8.1 million job openings and 9.3 million unemployed workers, employment demand has bounced back faster than people have been able (or willing) to go back to work.

The argument that unemployment benefits are inducing people to turn down paying jobs is simplistic. The latest round of government assistance has been enough to keep millions of households from becoming destitute, but jobless workers living in most U.S. cities can’t cover basic living expenses with unemployment benefits alone.

There are many other factors behind the surplus of job openings: daycare needs for children and the elderly, low pay, early retirements (made possible by stock market gains and rising home prices), and skittishness about the virus. Companies are working harder to attract and retain talent, as the pandemic brings quality of life issues to the fore.

We’ve witnessed a variety of supply and demand distortions during the pandemic crisis; they should eventually move closer to equilibrium as the economic recovery unfolds.

The hardest hit employment sectors are coming back to life, a positive sign for the overall economy. The biggest hiring gains last month occurred in leisure and hospitality (292,000) and education (144,000). As these service sectors recover during the summer, we’re likely to see workforce participation rise. 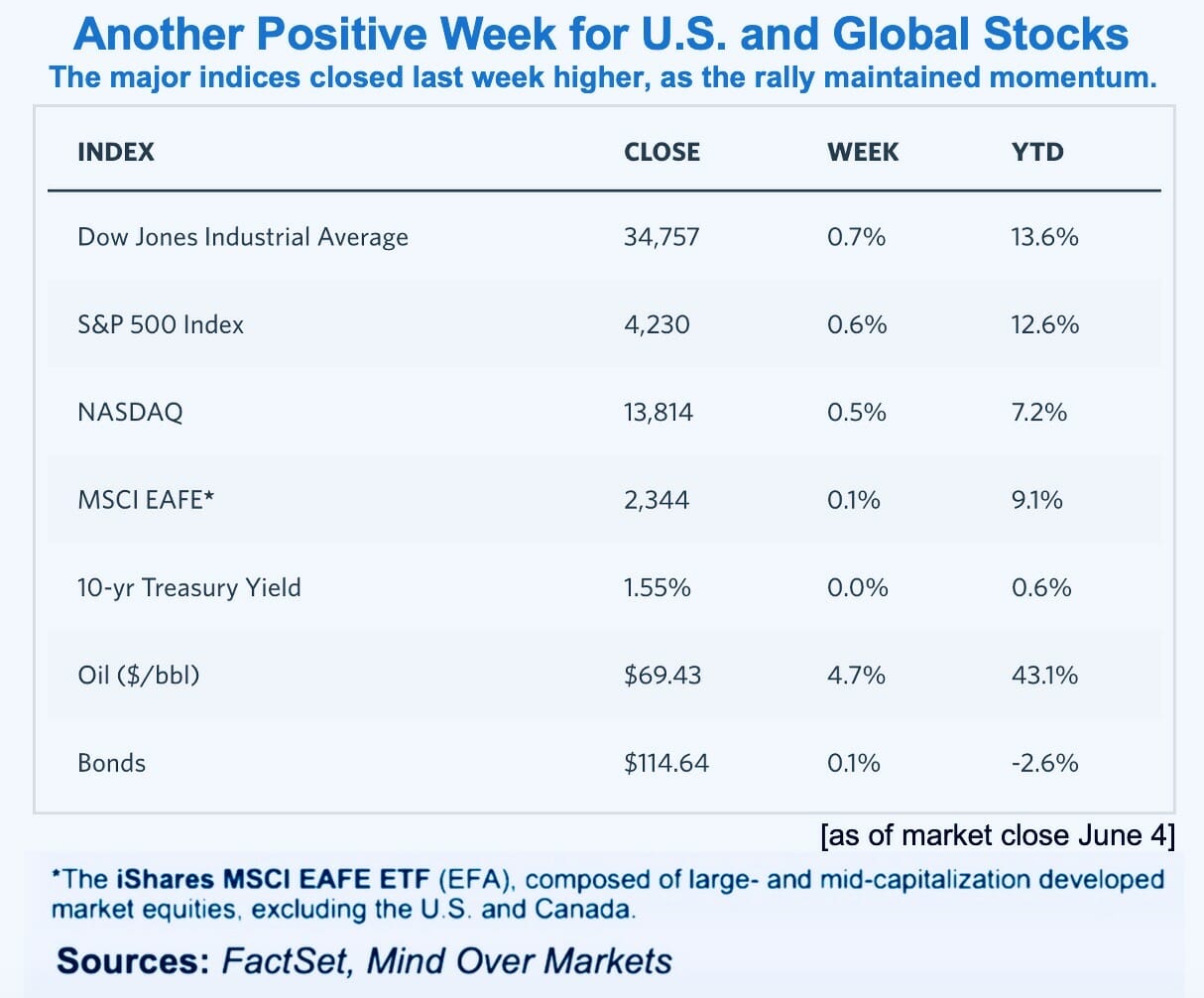 As of this writing during Monday afternoon trading, stocks were volatile and mixed, with the NASDAQ in the green but the Dow and S&P 500 in the red.

Inflation worries are persistent and they aren’t completely unwarranted. Wages rose by a robust 0.5% in May. That’s great for American breadwinners and their families, but it’s also a sign that employers might have to pass those costs along to consumers. Once again, perspective is called for. May wages (on a year-over-year basis) only increased by 2%, less than half the wage growth average of January through March.

The rotation toward value stocks should continue this year. During the past four decades, when corporate profits are quickly growing in the wake of a recession, value investments have typically outperformed growth investments. You should maintain exposure to both value and growth, but overweighted toward value.

I also advise you to emphasize quality and avoid speculation. Shares of movie theater operator AMC Entertainment Holdings (NYSE: AMC), cryptocurrencies, and other “meme” investments have been extremely volatile. Short-term windfalls may be tempting, but be forewarned, this sort of trading will end in misery. Always does.

For quality cyclical investments, look to the resurgent energy and financial sectors. I’m also keen on commodities. Which brings me to a silver-white metal called lithium.

Lithium is among a slew of commodities that are poised for huge price gains as demand for commodities explodes. Global infrastructure projects also will boost the need for lithium.

Lithium is crucial for a variety of industrial applications. The biggest growth driver for lithium is demand for lithium-ion batteries used in electric vehicles. For details about America’s number one lithium play, click here now.