I don’t like betting on an entire sector of the stock market to go down. Because if I’m right, that means a lot of people are at risk of losing their jobs. However, sometimes I can’t ignore an investment opportunity that seems ripe for the picking.

For instance, I believe homebuilder stocks have become overvalued and are at risk of taking a big dive this year. In a moment, I’ll explain how you can profit from the day of reckoning without risking a lot of money.

One of the more surprising outcomes of the coronavirus pandemic has been a surge in real estate prices during the past year. As result, demand for new homes has spiked since there is not enough inventory of existing homes to satisfy demand.

According to the U.S. Census Bureau, “sales of new single-family houses in April 2021 were at a seasonally adjusted annual rate of 863,000.” That is 48% higher than in April of the prior year.

Some of that increase is due to higher prices for raw materials such as lumber. Recently, the National Associate of Home Builders announced “Skyrocketing Lumber Prices Add Nearly $36,000 to New Home Prices.”

Okay, so that accounts for roughly half of the 20% jump in home prices. Presumably, most of the remainder has been profit since construction wages have only increased slightly.

The result has been a run on homebuilder stocks. Since bottoming out below $30 in March 2020, Texas-based homebuilder D.R. Horton (NYSE: DHI) has more than tripled in value. The same can be said of Lennar (NYSE: LEN), headquartered in Miami, Florida.

After closing beneath $24 in March 2020, ITB gained more than 200% by early May. Since then, it has backtracked 10% after the inflation figures for April were released on May 12. 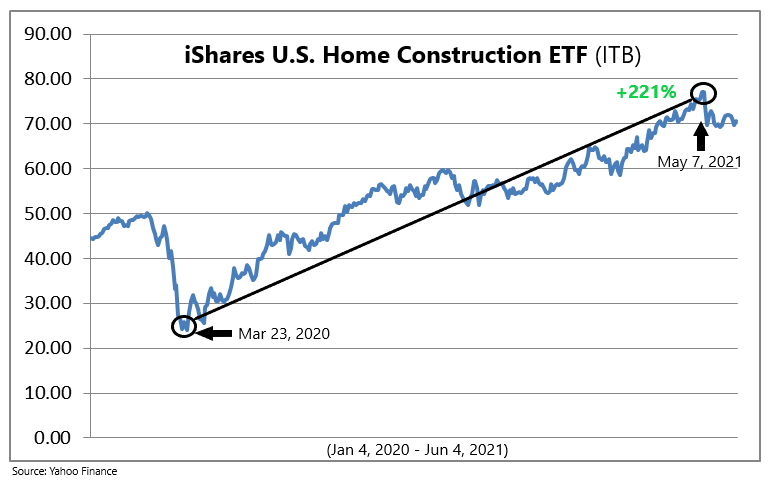 According to the U.S. Bureau of Labor Statistics, the Consumer Price Index for All Urban Consumers (CPI-U) rose 0.8% on a seasonally adjusted basis. Over the previous 12 months, it was up 4.2%.

That was its biggest annual increase since 2008 when the housing bubble burst and the stock market crashed. I don’t think the same degree of calamity will happen this time. However, I would not be surprised to see both markets go through a correction during the second half of this year.

If that happens, one way to play the downturn is to buy a put option on ITB. A put option increases in value when the price of the underlying security goes down.

For example, a few days ago while ITB was trading near $70, the put option expiring in January 2022 at the $67 strike price could be purchased for $5. For that trade to become profitable, ITB would have to drop below $62 within the next seven months.

Here is why I like that trade. Housing stocks are highly leveraged to the overall economy. When times are good, they do great. But when times get tough, they can really hit the skids.

I’m not expecting the economy to collapse, but there are signs that it is slowing down. Last week’s job report came in below expectations. The economy added 559,000 new jobs in May versus an estimate of 650,000.

Today, we’ll get the CPI-U numbers for May. If those figures are higher than last month’s results, we may see a quick selloff in the stock and bond markets.

The portfolio managers on Wall Street may begin dumping economically sensitive stocks, such as homebuilders. Once that party gets started, it could get out of hand in a hurry.

As I said at the start, I hope that doesn’t happen. But given all the warning signs that have been flashing recently, it would be foolish to ignore them.

Jim has developed a proprietary investing method that consistently beats Wall Street at its own game, in markets that are going up, down or sideways. His “310F” trade is the most accurate way I’ve ever seen to double your stake in just three days.