How to Profit from America’s “Sputnik Moment”

Think of 5G efforts by the U.S. and China as a “moon shot.” Below, I’ll point you toward the best way to reap investment profits from 5G implementation.

During the space race of the middle 20th century, Russia in 1957 launched Sputnik, the first artificial earth satellite. The event shocked America and catalyzed our country’s resolve to invest in science and beat the Soviets. The U.S. government launched large investments in research and development (R&D), because the private sector typically was reluctant to do so on its own.

The U.S. got to the moon first in 1969 and along the way, our scientists generated a variety of innovations that boosted our military and filtered into the consumer sector. 5G is no less momentous, perhaps more so. The country that loses the 5G race will lose the future.

The U.S. started to cutback on these investments in the 1970s, a decade of economic contraction, government retrenchment, and social malaise. Our country’s competitiveness has suffered ever since. China, at the same time, started to boost its R&D efforts in an attempt to become the world’s leading superpower.

After an ill-conceived U.S.-China trade war during the past four years that hurt both sides, Washington is finally stepping up to the plate with its own R&D plan. The “world’s greatest deliberative body,” as it’s sometimes called, has seemed more like a kindergarten lately. But in a remarkable and rare show of bipartisan consensus, the U.S. Senate is poised to pass the most ambitious industrial policy bill in U.S. history. The opportunities for individual investors are enormous.

Indeed, bold government stimulus, in this case to combat the coronavirus pandemic, has helped keep the bull market alive since the November 2020 election. On Monday, worries that this stimulus might spark inflation weighed on stocks. The Dow Jones Industrial Average fell 126.15 points (-0.36%), the S&P 500 slipped 3.47 points (-0.08%), and the tech-heavy NASDAQ rose 67.23 points (+0.49%).

In pre-market futures contracts Tuesday, the Dow and S&P 500 were treading water, but the NASDAQ was poised to extend its gains as Silicon Valley liked what it saw in the Senate bill to fund R&D.

We will bury you!

5G wireless technology looms large in the Senate legislation. 5G is the next-generation technology standard for broadband cellular networks. As its name implies, 5G is the successor to the 4G networks which provide connectivity to most current cellphones.

Aside from the space race, another parallel with the U.S.-Soviet conflict is the stark rhetoric used by lawmakers of both parties to justify the Senate bill. To my ears, the tone is reminiscent of the nadir of the Cold War, when Soviet Leader Nikita Khrushchev said of America: “We will bury you!”

“Around the globe, authoritarian governments smell blood in the water. They believe that squabbling democracies like ours can’t come together and invest in national priorities the way a top-down, centralized and authoritarian government can. They are rooting for us to fail so they can grab the mantle of global economic leadership and own the innovations.”

The legislation, which could be voted on in the Senate as early as Tuesday, is expected to pass by a wide majority.

The $195 billion bill would make R&D investments in such areas as semiconductor manufacturing, AI, robotics, space exploration, biomedicine, quantum computing, and 5G. The plan calls for direct federal subsidies for R&D in 5G.

How big a deal is 5G technology? The following chart shows how 5G leaves 4G in the dust: 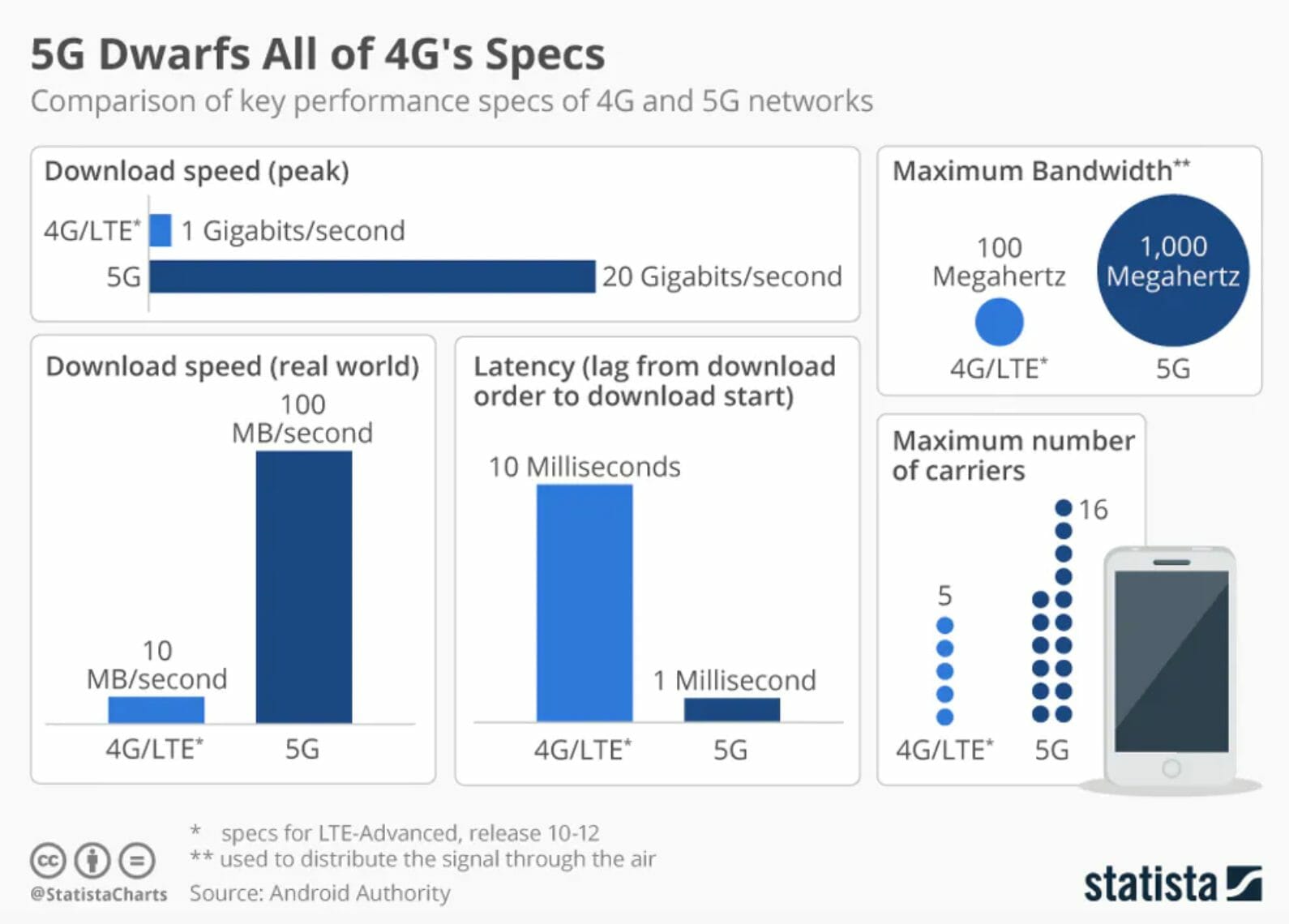 5G technology will provide faster and higher capacity transmissions to carry the massive amount of data that will be generated by AI, the IoT, smart cities, smart homes, autonomous vehicles, video streaming, virtual/augmented reality, and more.

The global implementation of 5G carries national security implications, for both China and America. Military 5G mobile networking capabilities will exert a huge influence on defense communications and situational awareness on the battlefield.

The country that dominates 5G will obtain an edge in military competitiveness. The Chinese government has been heavily subsidizing 5G development. The U.S. government has left 5G to the private sector…that is, until the advent of the Senate’s industrial policy bill. Once it gets the Senate’s nod, the legislation is nearly assured of passage in the House. President Joe Biden is expected to sign the final version when it reaches his desk.

The U.S.-China arms race has morphed into a “5G race.” The time to jump aboard for investment profits is now.

Our team of strategists recently put together a special report on how to invest in 5G. Click here for our presentation.