Amazon (NSDQ: AMZN) founder and CEO Jeff Bezos, a self-proclaimed “space geek,” announced on Monday that he would take a trip to space next month, when his private space company Blue Origin conducts its first human flight.

“Ever since I was five years old, I’ve dreamed of traveling to space,” Bezos, 57, wrote on Instagram.

Boy, am I jealous.

When I was five years old, back in 1963, I was obsessed with America’s effort to put a man on the moon. Throughout the decade, I avidly followed the Mercury, Gemini and Apollo programs, revered the astronauts, and launched model rockets in my backyard. Pictures of space capsules adorned my bedroom wall.

Then during the dreary 1970s, as NASA’s budget got decimated, all of that glory just faded away.

Below, I pinpoint a shrewd investment play on the new golden age of space. You might be surprised by the specific asset that I recommend, but space missions would be grounded without it.

Bezos’ galactic ambitions reflect the animal spirits that have been animating the business and financial worlds since the November 2020 election. The major U.S. stock market indices continue to hover near record highs, but with volatility as inflation fears wax and wane.

Blue Origin’s first commercial customer is the satellite television provider Eutelsat, which will put one of its satellites atop Blue Origin’s New Glenn orbital rocket for delivery in space. Eutelsat is expected to start launching TV satellites via New Glenn in 2022.

Bezos isn’t the only guy with deep pockets whose eyes are on the stars. Blue Origin’s major competitor is private company SpaceX, founded by Tesla (NSDQ: TSLA) CEO Elon Musk.

Elon Musk’s SpaceX in 2017 successfully launched a Falcon 9 rocket carrying a commercial EchoStar 23 communications satellite from an historic launch pad at NASA’s Kennedy Space Center in Florida. It was the first time a commercial satellite launch occurred at the pad that once served as the sending-off spot for Apollo moon voyages.

Read This Story: How to Profit from America’s “Sputnik Moment”

Even billionaire Richard Branson is getting into the fray. Sir Branson, whose Virgin Group venture capital conglomerate is involved in everything from commercial aviation to banking, launched a spaceflight enterprise of his own called Virgin Galactic.

Lithium: Don’t leave earth without it…

All of these space endeavors have one vital substance in common: a silver-white metal called lithium.

Lithium sounds like a fictional substance you’d encounter on Star Trek, but it’s very real and, for individual investors, profitable.

Among its many useful properties, lithium is a superb conductor of heat and electricity and it’s a highly reactive element. Lithium-ion batteries make a wide variety of modern technologies possible. These batteries power smartphones, electric vehicles (EVs), and renewable energy systems. But lithium also is indispensable to Blue Origin, SpaceX, Virgin Galactic, and NASA for space applications.

NASA and the U.S. Air Force have established a joint interagency program to develop lithium-ion batteries. NASA has been using these batteries for several space missions, such as the Ingenuity Mars Helicopter that’s currently buzzing around the skies of the red planet.

Burgeoning demand for lithium, for a myriad of commercial and military uses, makes this commodity a pandemic-resistant growth play. Lithium does double duty as an inflation hedge, because it’s not only a vital commodity that benefits from economic expansion but it’s also in short supply (see chart). 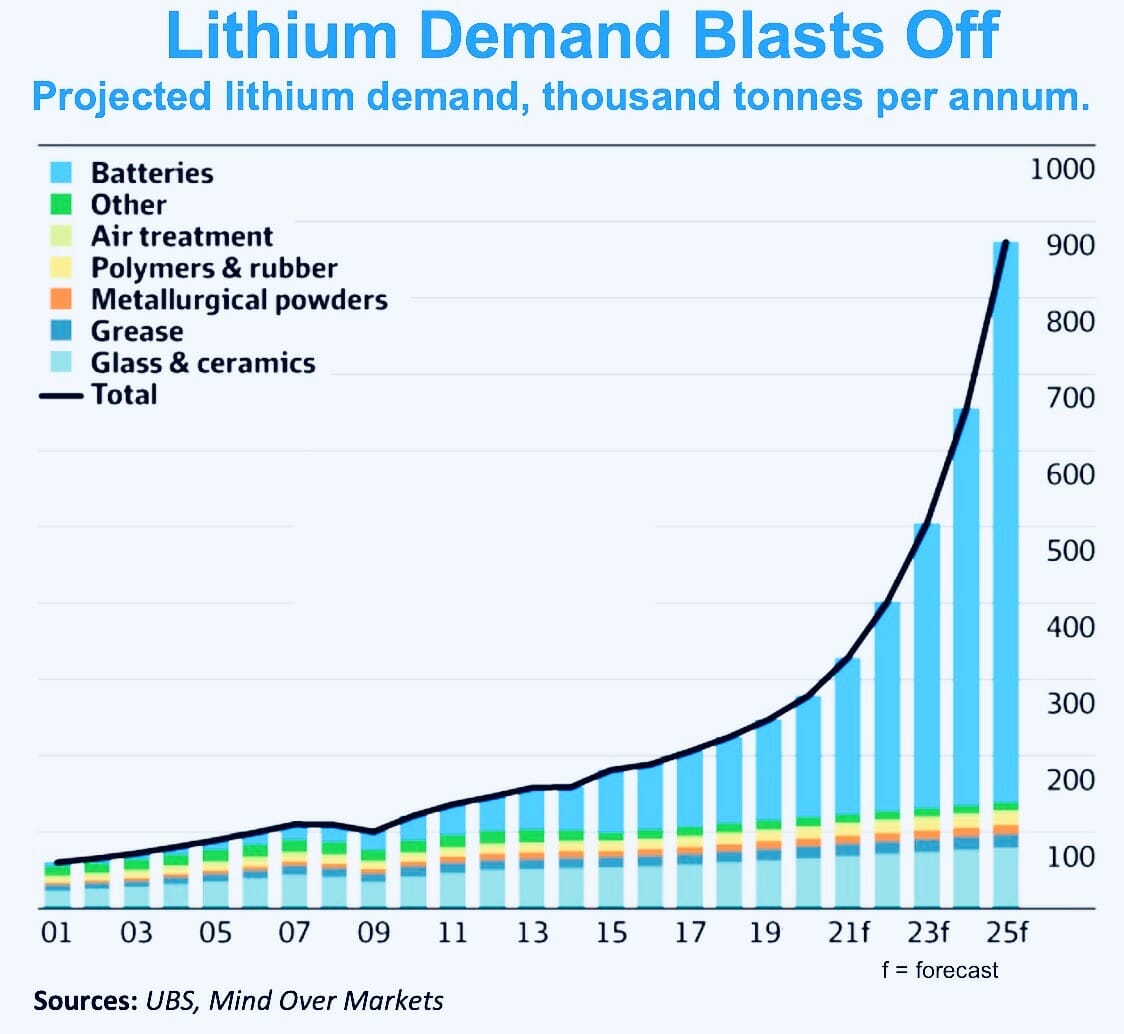 Lithium is among the most exciting investment stories of 2021 and beyond. I’m not just making that assertion because I’m a space enthusiast like our three egocentric amigos. I know a great growth story when I see one.

The next decade will witness an explosion in the use of lithium, in a variety of applications that include spacecraft, satellites, airplanes, EVs, high-speed trains, and solar and wind energy. Meanwhile, national governments and development banks are ramping up capital expenditures in lithium-intensive energy projects across the world.

The purest plays on the world’s growing thirst for lithium are the publicly traded companies that mine and process lithium. But which miners make the best investments? We’ve done the homework for you. For details about America’s number one lithium opportunity, click here now.