Earlier this year, I recommended to readers of my Mayhem Trader service that they buy a put option on Wendy’s (NSDQ: WEN). A put option increases in value when the price of the underlying security goes down.

The reason I believed Wendy’s share price was likely to fall was the threat of increased competition. At that time, arch-rival McDonald’s (NYSE: MCD) was about to introduce three gourmet versions of its chicken sandwich to better compete with Wendy’s.

My hunch proved correct. A few weeks later, the put option position I recommended could be closed out for a 50% gain. Since then, its share price gradually recovered to where it was seven months ago. Then, on June 8, WEN jumped 26% to reach its highest price in 18 years (circled in chart below). 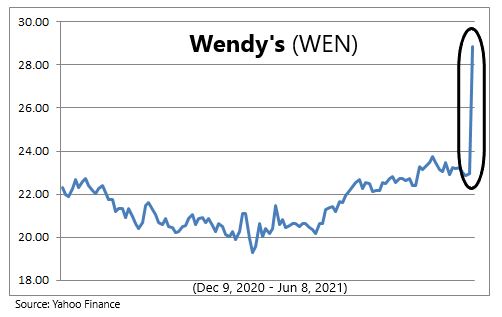 What happened to spark such a big move in the stock? The day before, Wendy’s announced that it is bringing back its seasonal strawberry chicken salad this summer. I have to admit that is a tasty meal. But that is not the reason that trading volume in WEN was more than 28 times its daily average the following day.

The explanation is baffling and illustrates the growing influence of “meme stock” traders that are becoming increasingly aggressive. It also poses a threat to conventional stock market analysis that largely relies on empirical data to determine fair value for a business.

Until now, the meme stock movement has been focused on financially weak companies with large short positions such as GameStop (NYSE: GME) and AMC Entertainment (NYSE: AMC). Their objective is to induce a short squeeze by forcing short sellers to buy back the stock at inflated prices to cover margin calls.

Those efforts have been successful. In late January, GameStop went from below $20 to above $400 in a matter of weeks. And as I explained last week, AMC has gained more than 3,000% this year!

Read This Story: YOLO Trading: We’ve Seen This Movie Before

For that reason, meme stock investors are looking for other stocks to exploit. The coronavirus pandemic did enormous damage to many companies. Many of them have taken on a lot of debt to stay in business. Some of them may not make it.

However, there is a big difference between Wendy’s and those two companies. Wendy’s is profitable and reported solid first-quarter results this year. The company also raised its guidance for the remainder of 2021.

Wendy’s is not under financial duress and short interest in its stock is relatively low at just under 5%. For those reasons, it is not clear why the meme stock crowd targeted Wendy’s as its next short squeeze candidate.

Unless, of course, inducing a short squeeze is no longer the objective. Perhaps the meme stock traders have figured out that all they need to do is collectively buy into the same stock at the same time to drive its share price higher.

If that is the case, the meme stock traders have lost their claim to moral equivalency. They can no longer say that they are simply beating short sellers at their own game.

The recent stock market activity involving Wendy’s is no different from what is happening with GameStop and AMC Entertainment. It has become a trading vehicle for speculators with a very short-term horizon.

That makes Wendy’s a dangerous stock to own. Last week, WEN went from below $23 to above $29 in just one day, only to drop below $26 the following day. That type of extreme volatility creates an investment opportunity.

Last week while WEN was trading near $26, the call option that expires on July 16 at the $26 strike price was selling for $3.30. For that trade to be profitable at expiration, WEN would have to appreciate more than 12% over the next five weeks.

At the same time, the put option that expires on the same day and at the same strike price was going for $2.80. That means WEN would have to drop nearly 11% for that trade profitable at expiration.

The options market reflects the confusion surrounding Wendy’s. Nobody knows which way it will go. But everyone seems to think that it will move strongly in one direction or the other very soon.

That is no longer investing. It more resembles a game of chicken to see which side will blink first. I don’t know which way WEN will turn next, but this is one meal that I think I’d rather skip.

Jim has developed a proprietary investing method that consistently beats Wall Street at its own game, in markets that are going up, down or sideways. His “310F” trade is the most accurate way I’ve ever seen to double your stake in just three days.