The title of my article today sounds like a B-grade science fiction movie. But the fact is, we’re witnessing the rise of the Second Machine Age and robotics just scored a big victory in the U.S. Senate.

The Senate on Tuesday passed by a wide margin a new industrial policy bill that devotes $195 billion to fund research and development (R&D) in a host of leading-edge areas, chief among them robotics, learning machines, artificial intelligence systems, quantum computing, and semiconductors.

Outstanding investment opportunities right now include companies involved in personal robotics, factory automation, and robotic equipment for remote medical care. The latter segment is particularly appealing, due to the fast-growth of health services and the changes wrought in that sector by the coronavirus pandemic. More on that in a minute.

Read This Story: How to Profit from America’s “Sputnik Moment”

Stocks have been soaring to new highs in recent months, boosted by aggressive government stimulus to combat the pandemic as well as the advent of additional federal spending, such as this week’s industrial policy legislation. But along the way, the path has been bumpy as investors worry about inflation.

Investors await the arrival of new data on inflation, set for release Thursday, that will either confirm or assuage anxieties about rising prices. It’s worth noting that robots help keep a lid on prices; their use precludes inflationary pressure from wage gains.

The combination of social distancing and stubbornly elevated levels of unemployment is expediting the adoption of robots in the workplace and home. Robotics already was a big investment theme and the pandemic has given it more impetus.

The key motivation behind the Senate bill is to counter China, which has been pouring resources into R&D at a faster clip than any other country. The following chart tells the story: 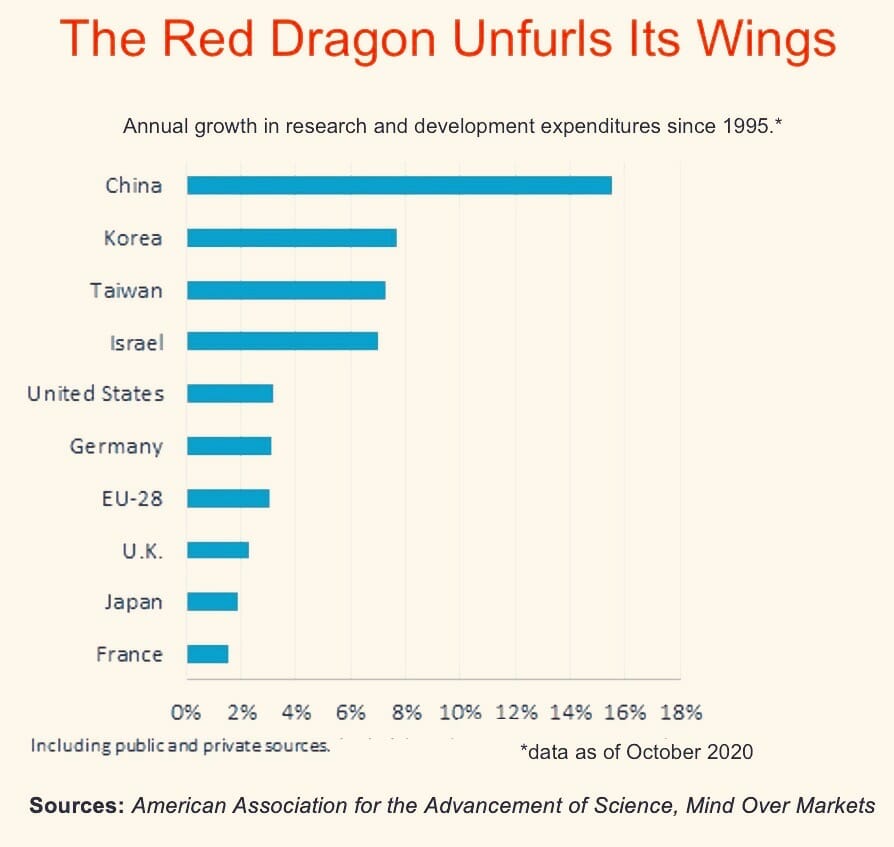 America has lost a lot of manufacturing jobs over the past 50 years but cheaper human labor overseas isn’t the only reason. The growing adoption of robotics is a main factor.

I’ve always found it interesting that many pundits lament the loss of repetitive, low-skilled jobs…the sort of work that these well-paid pundits have never had to experience themselves.

Robotics helps pave the way for a retooled economy that emphasizes higher-paying, value-added services. The 50-50 Senate, ordinarily riven by bitter partisanship, seems to understand the benefits of this transformation. The industrial policy bill, officially called the U.S. Innovation and Competition Act, was supported by both Republicans and Democrats in the chamber in a 68-32 vote.

Robotics is permeating a host of industries, even those that ordinarily wouldn’t seem in need of the technology. Notably, retail giants such as Amazon (NSDQ: AMZN) and Wal-Mart (NYS: WMT) are increasingly automating their distribution capabilities, especially as e-commerce grows in emerging markets and supply chains become stretched.

R&D intensive companies in the forefront of new technology trends should prosper this year and beyond, as North America’s recovery continues and a one-moribund Europe begins to revive under monetary stimulus and economic re-openings.

Analysts predict robotics will boom in the manufacturing sector, to achieve an estimated global market value of $18.6 billion this year (see chart). 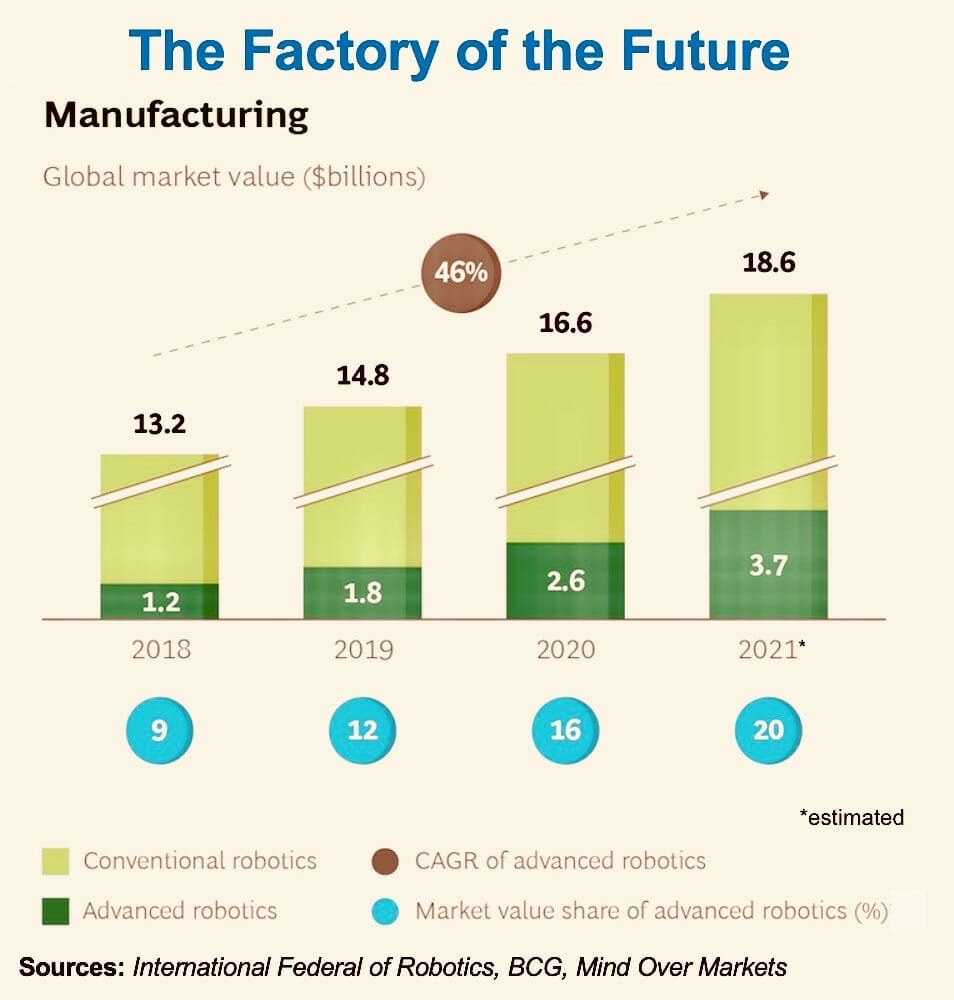 What’s more, countries with a greater number of robotic programmers and robotic infrastructure are likely to become more attractive to manufacturers than countries with cheap labor.

Dr. Robot will see you now…

In health care, where costs can be astronomical, the push for intelligent machines has been a multi-decade trend. Computerized systems, for example, can translate a surgeon’s hand movements into corresponding micro movements of instruments inside the patient.

The ascendancy of the Second Machine Age is the investment theme of a lifetime, on par with development of the steam engine, electricity, computers, and the Internet.

This dynamic perfectly explains the increasing prevalence of telemedicine. Robotics is being integrated with ultra-fast wireless capabilities to transform the doctor-patient relationship.

During the pandemic, quarantined consumers got accustomed to telemedicine, more than ever before, because of lockdowns and social distancing. As COVID restrictions ease, this development will accelerate.