The Investment Spoils of Summer

For stock market advice today, I turn not to financial gurus but to the Great American Songbook, specifically a tune made famous by my favorite crooner, Mr. Frank Sinatra:

The best is yet to come and babe, won’t that be fine?
You think you’ve seen the sun
But you ain’t seen it shine…

Summer officially starts on June 20 and I’m bullish on stocks this season. We’ve been enjoying a powerful rally, but historical evidence suggests that the best is yet to come.

Since 1928, the average gain in the S&P 500 from June through August is 3.1%. That’s the best three-month stretch for the index on average in any calendar year.

There’s no guarantee that this average long-term trend will repeat itself this particular summer, but as we saw last week, the bull market seems unstoppable. Despite worse-than-expected inflation data last week, U.S. government bond yields actually fell to their lowest levels in three months. Stocks hover near all-time highs.

Investor nervousness about inflation has largely dissipated, although it could reemerge at any time. I think the bull market has plenty of momentum left, but you should brace yourself for volatility along the way.

For now, Wall Street is agreeing with the Federal Reserve that price pressures will probably prove temporary. The S&P 500 last week hit a new record high, rising for the third straight week, and the 10-year Treasury yield dipped below the 1.50% level for the first time since March (see chart). 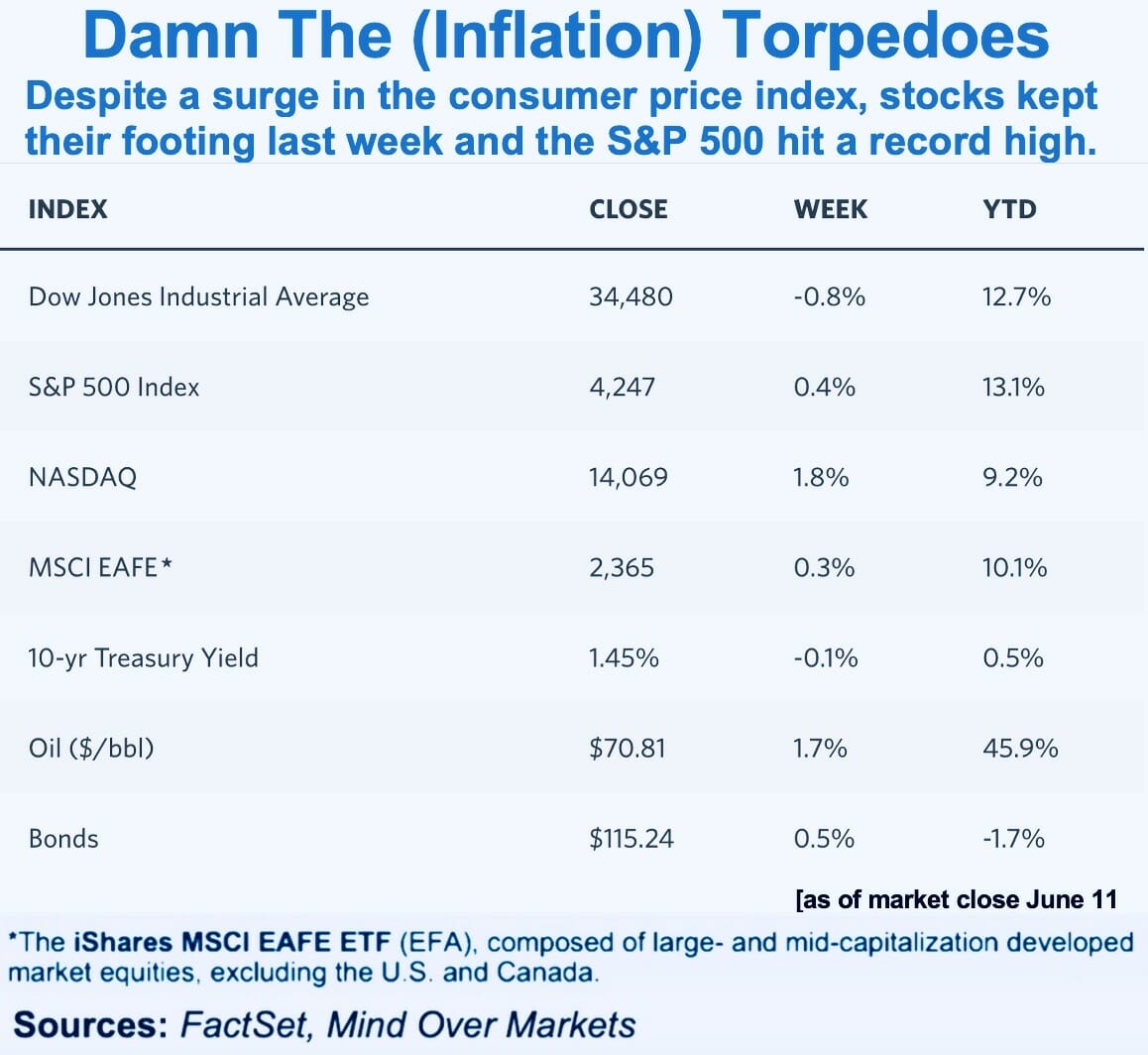 In pre-market trading Monday, U.S. stock futures were starting the new week higher. In Europe, stocks were climbing in morning trade to their highest level in a year. Optimism is spreading throughout the global economy as the coronavirus pandemic in most (but not all) countries wanes. Infection and death rates are falling in the U.S. and most of Europe but some hot spots, such as India, remain.

“Hot” certainly describes inflation lately. The U.S. Bureau of Labor Statistics reported last Thursday that the U.S. consumer price index (CPI) jumped 5% on a year-over-year basis in May 2021, the fastest pace since August 2008.

The spike in the CPI in May was largely caused by a few segments that have been hit the hardest by the coronavirus pandemic and are now benefiting the most from the removal of lockdowns.

Airfare, automobile rental, restaurants, and hotel prices witnessed significant price increases, as pent-up consumers left their homes and opened their wallets. With these segments still below their pre-pandemic levels of activity, further price increases should be expected this summer.

As the following chart shows, the core CPI (excluding food and energy) in May soared at the fastest pace since 1992 (see chart). 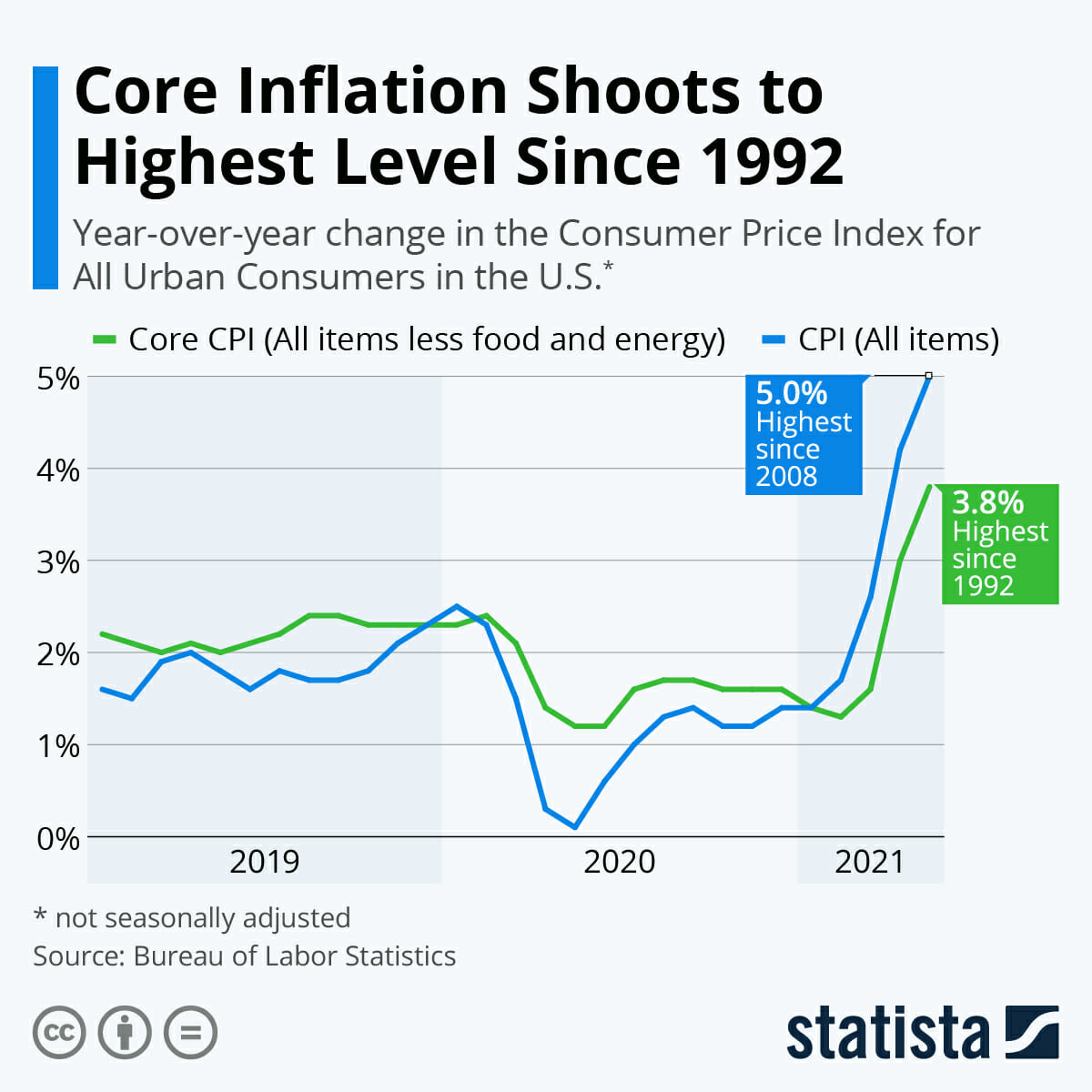 A shrewd strategic move now would be to increase your exposure to cyclical stocks. The sectors and asset classes that are among the most appealing under current conditions are commodities, energy, financials, precious metals, and small-cap stocks.

The name of the game…

The run-up in stock prices since the November 2020 election has filled the coffers of corporate giants with huge piles of cash. Those companies are putting that money to work, by going on a shopping spree.

An all-time record of $1.77 trillion in merger and acquisition (M&A) transactions globally were announced through the first four months of 2021, according to data from Refinitiv. That’s a huge year-over-year increase of 124%. The pace of M&A activity continues to gather steam.

A common thread of these M&As is the desire of companies to acquire smart technologies that are on the leading edge, to fuel revenue and earnings growth and to demonstrate to analysts the ability to innovate.

Many M&A targets are smaller bargain-priced companies that can provide acquiring companies with new products, capabilities and customers. Leveraging deal-making to expand market share is a trend that’s likely to accelerate even after the pandemic is over.

Among the technologies serving as enticements for M&A are artificial intelligence, robotics, 5G wireless networks, virtual/augmented reality, telemedicine, and sensors for such end products as drones, smart homes, and autonomous vehicles.

In the pandemic era, corporate consolidation is the name of the game. Even the whisper of a “mega-merger” can hand investors enormous returns. My colleague Nathan Slaughter, chief investment strategist of Takeover Trader, just pinpointed a potential M&A deal that could dwarf them all. Want to get in on Nathan’s next big trade? Click here for details.