How to Profit From The Great Jobs Reset

Take this job and shove it.

That seems to be an appropriate theme song for the employment market these days. Millions of job openings are going begging and workers are quitting their jobs in droves. Welcome to the Great Jobs Reset.

According to a new poll released last month, 64% of U.S. workers surveyed would pick permanent work from home over a $30,000 raise.

The number of resignations and layoffs reached record highs and lows, respectively. The share of workers leaving jobs came to 2.7% in April, the highest quit rate in 20 years.

It’s been decades since the American worker enjoyed this much leverage. In workplace interactions, the remote is supplanting the in-person. As I explain below, therein lays investment opportunities.

First, take a look at the following chart: 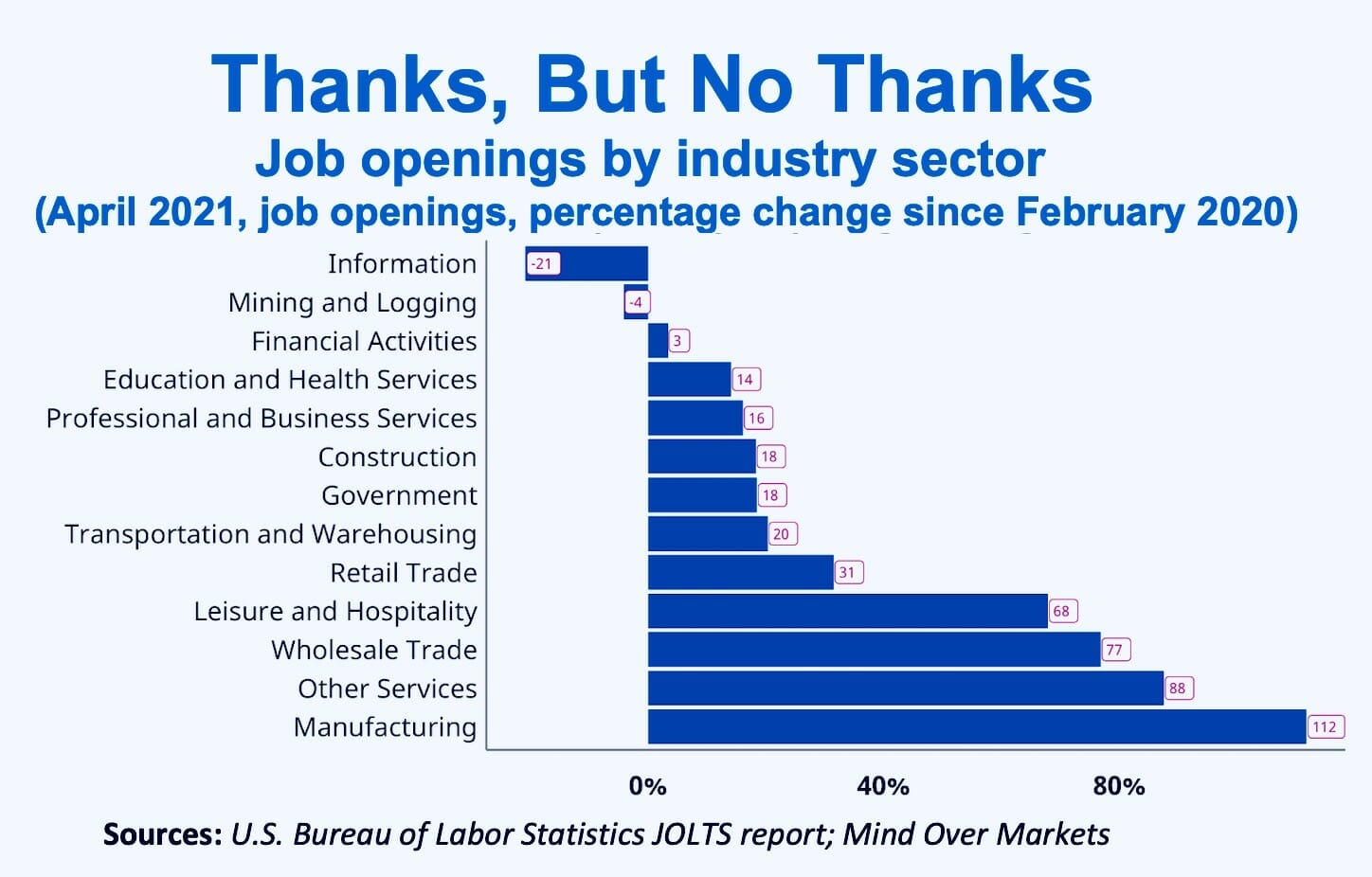 Silicon Valley giants will continue to reap the spoils of the new economy that’s being birthed by the pandemic, i.e. an accelerated adoption of mobile and virtual technologies.

Millions of workers are getting accustomed to WiFi teleconferencing and other remote technologies. When the virus is finally vanquished, they’ll be clamoring more than ever for these conveniences in their personal and professional lives.

In pre-market futures contracts Tuesday, all three U.S. stock indices were trading in the green as investor interest shifted to growth stocks. European and Asian stocks have been on a tear as well.

The final throes of the COVID pandemic is providing an opportunity for companies and their employees to forge a more productive relationship that doesn’t rely on soul-crushing, gas-guzzling commutes.

As the economic recovery strengthens, companies are struggling to fill job openings, but many workers aren’t eager to go back. The suffering generated by the pandemic has caused many people to reevaluate their priorities.

Companies are offering a host of enticements and fringe benefits (e.g., educational subsidies and higher wages) to lure reluctant workers. The pandemic demonstrated that white collar productivity not only remained intact during quarantine but actually increased. The status quo has been shattered.

Robotics has gained greater impetus under these conditions, especially in the wake of the U.S. Senate’s passage last week of an industrial policy bill that targets robotics for massive federal subsidies. These sophisticated machines are freeing humans from repetitive, low-paying tasks.

In the newly restructured economy, low pay and oppressive conditions are for many workers no longer satisfactory. They’re weighing their options.

As the information age continues to unfold, let’s not be nostalgic for industrial era structures. We ought not to weep and moan about the loss of dehumanizing jobs and work conditions. New, more fulfilling occupations are emerging to take their place. Proactive investors can profit from this economic evolution.

The (robotic) doctor will see you now…

Personal robots, remote medical treatment, autonomous vehicles, management meetings via telescreen…who knew that the animated TV show The Jetsons would predict so much of our current reality?

The rise of telemedicine is a prime example. During the pandemic, quarantined consumers got accustomed to telemedicine, more than ever before, because of lockdowns and social distancing.

Selective medical technology (medtech) companies are thriving. We’ve pinpointed the best plays on telemedicine, but many investors have never heard of them. The time to invest in these little-known medtech stocks is now, before you start hearing about them on CNBC and their shares soar. For details, click here.