Why The Pandemic Was Good News for Pot

Appears to be a long time,
Yes, a long, long, long time
Before the dawn. — CSNY

Adversity often turns out to be a blessing. Throughout the millennia, it has frequently taken a war, plague, famine, economic collapse, or natural catastrophe to create beneficial change. During a dark experience, it can seem like a long time before the dawn. But it always comes.

The coronavirus pandemic has proven to be a catalyst for major growth in the marijuana business. As efforts to legalize marijuana on the federal level hit an impasse, macroeconomic forces are generating a powerful tailwind for marijuana companies.

Several legalization bills are pending in Congress that, if any single one of them passed, would greatly boost the marijuana industry. Chief among them is the Marijuana Opportunity, Reinvestment and Expungement (MORE) Act.

Among other things, the MORE Act would federally deschedule cannabis. MORE passed the U.S. House but it has yet to get a vote in the Senate. Hello gridlock, my old friend.

The consensus among lawmakers in both parties is largely favorable toward cannabis, but political turmoil roils the marbled halls of our national legislature.

Federal legalization once seemed inevitable. However, the January 6 insurrection is casting a long, acrimonious shadow. Amid the posturing, epithets, and television soundbites, actual lawmaking remains difficult.

As of this writing, it’s far from clear how marijuana legalization on the federal level will pan out. What is abundantly clear, though, is that the state-legal cannabis industry is enjoying massive growth, in large part thanks to the coronavirus pandemic.

The efforts of canna-businesses to develop technology and operational logistics to meet demand during the pandemic will pay off in coming years. The health exigencies of the coronavirus crisis accelerated the development of much-needed marijuana infrastructure. Over the last several months, marijuana entrepreneurs have planted the seeds of future prosperity.

For many Americans, stocking up on pot has become as essential as stocking up on milk. Take a look at the following chart, published on June 14 by the marijuana research firm New Frontier Data: 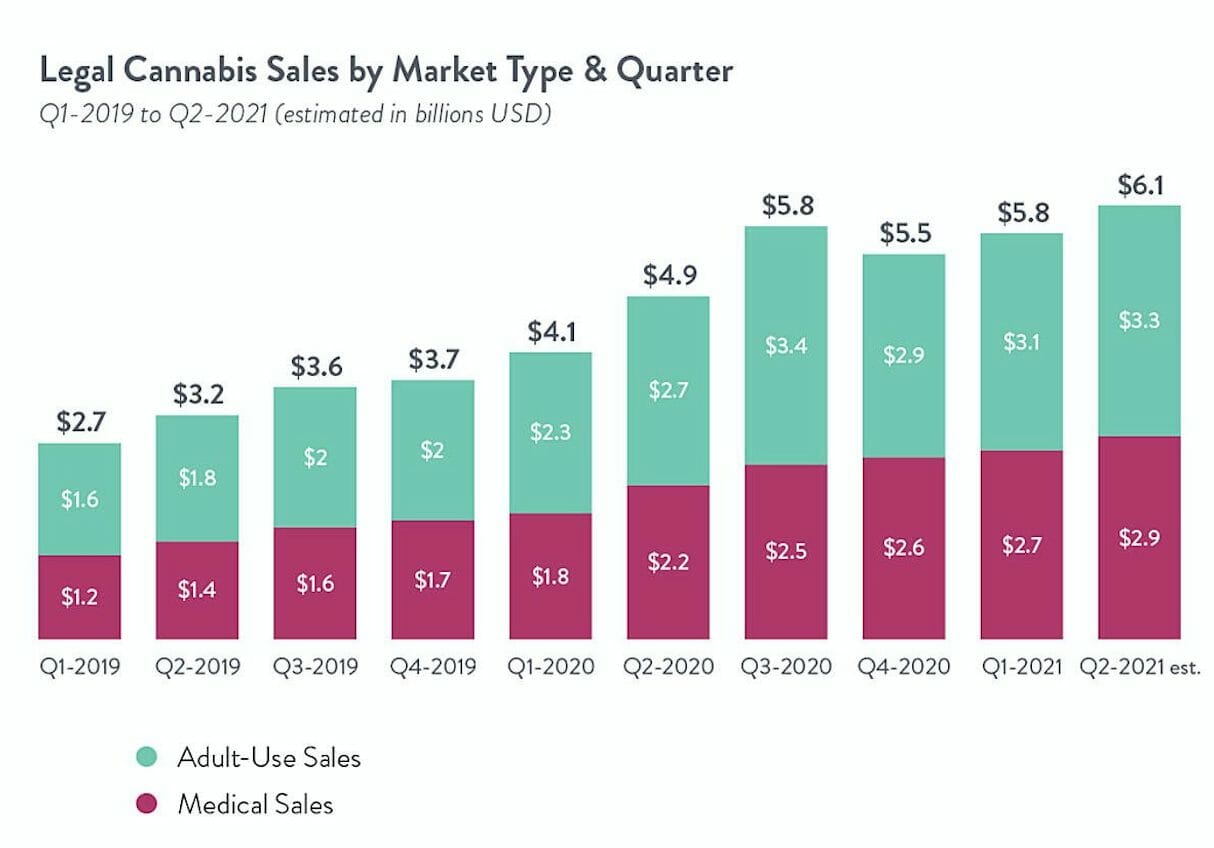 New Frontier expects legal cannabis sales to increase by about 4.4% from the first to second quarters of 2021. Quarterly sales across legal medical and adult-use states reached an all-time high of $5.84 billion in Q1 2021, with sales for Q2 2021 projected to surpass $6 billion.

In calendar year 2020, total combined sales of cannabis across legal medical and adult-use state markets surpassed $20 billion. With 10 newly legalized state markets expected to fuel sales over the next two years, total annual legal sales nationwide are projected to grow at a compound annual growth rate (CAGR) of 16% over the next five years, reaching $43 billion by 2025.

The recreational use of cannabis is legalized in 17 states and the District of Columbia. However, the biggest driver of growth is the medical market.

New Frontier Data projects that there will be 5.4 million registered medical cannabis patients in aggregate in the U.S. by 2025, representing nearly 2% of the entire U.S. population.

As cannabis cements its status as a consumer staple, some pot stocks are superb investments. But many others are not. You need to conduct due diligence. The good news is, we’ve done the homework for you. Our stock-picking experts have unearthed hidden gems in the marijuana industry that most investors don’t even know about.

Looking for the safest ways to profit from the robust momentum of cannabis investments? Click here for our free report.